Known for his ball-striking, Jason Dufner wins by leaning on another skill: resilience 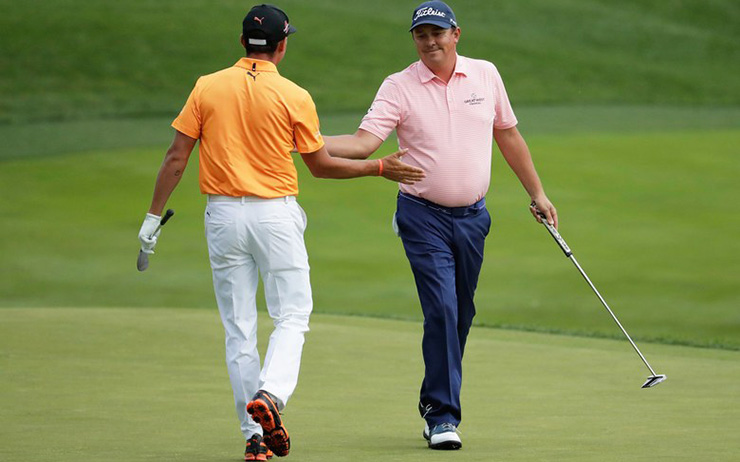 Jason Dufner showed more about his game Sunday in winning the Memorial Tournament than he had in any of his previous victories, including his PGA Championship triumph five years ago.

In the wake of a stumbling third-round 77—after setting the 36-hole tournament record at 14 under with a pair of 65s—Dufner found the resourcefulness and grit to calmly shoot a closing four-under-par 68 and win by three strokes. And he finished impressively to do it, playing the last four holes in two under par, including a three-foot birdie on the par-4 17th when the green was as receptive as a frying pan.

“I always take a lot of pride in kind of being a fighter, trying to come back,” said Dufner, 40, who looks back at his 10-year struggle just to make it to the PGA Tour as evidence of his determination.

Dufner doesn’t look like a fighter. He’s not ripped like many of the younger crowd, which is saying it delicately. He strolls the course with such indifference that it appears he’s on his way to the dentist. He brings ennui to the term “even-keeled.” But you don’t win without desire. Or without being able to hit shots under pressure. And Dufner always has been a superb shot-maker.

The putter, however, was another matter entirely. Daniel Summerhays, the third-round leader, has a putter nicknamed “Sweet Love,” from his college days. Not exactly as cool as Calamity Jane, but it earned a nickname nevertheless.

You wouldn’t have been surprised if Dufner simply called his putter “The Enemy.” Seldom did it seem like his friend, and he reciprocated at the RBC Heritage when he dropped his putter near the edge of the cup at the fifth hole at Harbour Town Golf Links after mishandling a short putt. Had to be the club. The 54-hole leader at Hilton Head, Dufner ended up T-11 after closing with a 76.

But this week at Muirfield Village, Dufner putted well enough to complement the full swings. He led the field in strokes gained/approach the green, hitting 54 greens in regulation. He also ranked 10th off the tee. He was 47th in putting, though in putting per greens in regulation he ranked first. And it was there when he capped a flawless back-nine 32 with a 33-foot par save on the 18th to make sure no one could catch him.

“You know, a lot of times for me the ball-striking is what I have to do well, and that’s kind of what I did on the back nine,” Dufner said, self-diagnosing. “I hit three or four shots that I almost couldn’t miss them, even though I tried on 17. Then to make par on 18 was really special. Obviously, knowing that I need to make bogey at worst to have a chance, but to make a 35-footer on the last hole, I did that a couple of years ago in Dallas to win, too.”

“To see him make that putt on the last was cool,” said Rickie Fowler, who ended with a 70 and shared second place with Anirban Lahiri at 10-under 278 after the native of India shot an early 65 and watched the carnage unfold in wet weather conditions that resulted in two delays and nearly forced play into Monday.

With his fifth career victory, Dufner moved back inside the top 50 in the world. He is the second Ohio native to win the Memorial, joining the tournament founder and host, Jack Nicklaus.

“Pretty good company there,” Dufner said in his usual phlegmatic way after winning on a layout he didn’t particularly care for until he played for the U.S. Team in the 2013 Presidents Cup.

He also is keeping company with Sir Nick Faldo, who in 1989 was the last player to shoot 77 or higher in the third round and go on to win at PGA Tour event. He did that in the Masters with a 77. Only Kenny Knox shot a higher third-round score in a non-major and won, carding an 80 in the 1986 Honda Classic.

“I hope it’s the start of some big things for this year and going forward. I’ve had a pretty good year this year,” said Dufner, who missed the cut in his previous start but had four top-13 finishes in his last seven starts. “I’ve been really consistent, a lot of top-25s and a lot of made cuts. I know that doesn’t sound flashy and great. But I felt like I played pretty well every week this year. It was a matter of time at some point some things were going to happen for me to be able to win.”