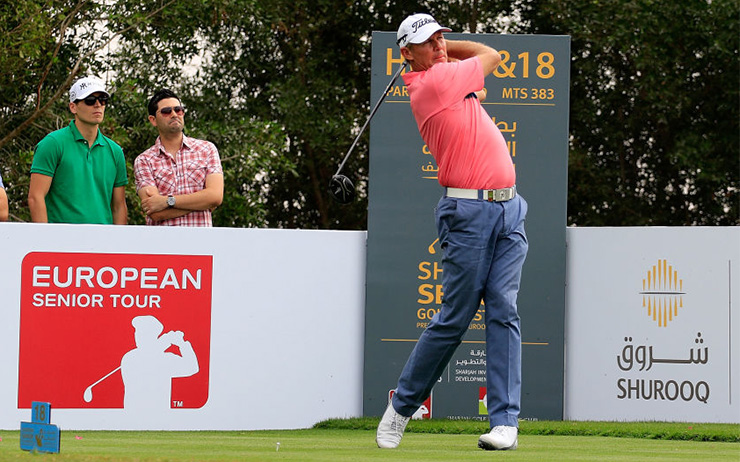 James Kingston didn’t know what to expect from his game or Sharjah Golf & Shooting Club before the season-opening Sharjah Senior Golf Masters. It seems he needn’t have fretted about either.

The 51-year-old South African has a maiden European Senior Tour title in his crosshairs after firing a six-under 66 in Friday’s second round to summit the leaderboard at -10.

A two-time winner on the European whippersnappers (read main) Tour, Kingston takes a one stroke advantage to his 12.05pm, final round tee time today over countryman and overnight leader Chris Williams and Englishman Gary Marks.

With six players within three strokes of Kingston’s lead, Sharjah’s historic 9-hole debut as a European Tour venue is set for a compelling climax. Kingston is just pleased to be part of the mix.

“I’m absolutely delighted,” said Kingston who carded seven birdies, including four in succession from the third to the sixth, in his 66.  “Coming here, not knowing what to expect with the golf course. I wasn’t 100 per cent sure how I was playing, but ten under par is great.”

Marks got off to a flying start with three birdies in a row and matched Kingston’s total of seven on the way to a four under 68 which would have been even better but for a double bogey on the seventh and a bogey on 11.

“It was a great start, you can’t plan things like that, but you have to keep it going and not defend or get complacent,” Marks said. “I had a period around the middle of the round, took a double bogey on seven and I had another bogey soon after, so I was in a bit of trouble. But a couple of decent putts went in, one for par and one for birdie and I finished steadily after regrouping.”

Williams followed up his electrifying course record opening round of 65 with a more sedate two under 70 while Roger Chapman (67), Steen Tinning (71), Magnus Atelvi (71) and reigning European Senior Tour order of merit champion Paul Broadhurst (67) are poised in a share of fourth at -7.