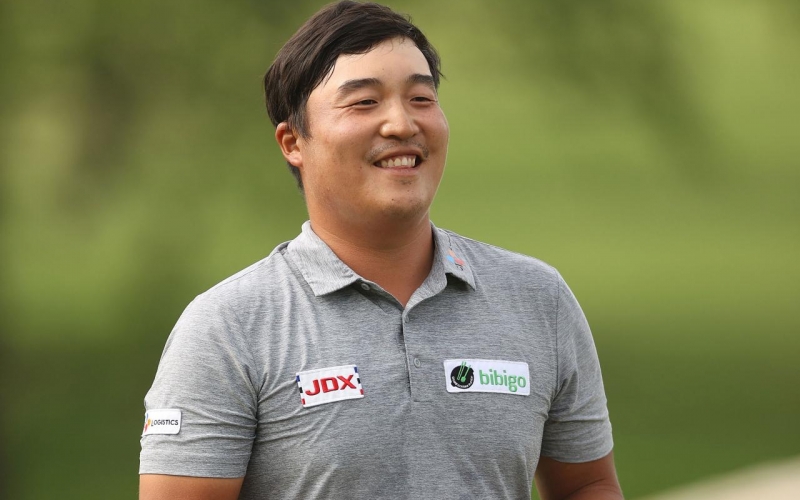 By Dave Shedloski
K.H. Lee’s breakthrough victory Sunday in the AT&T Byron Nelson might not carry the emotional weight of the long-sought win Richard Bland registered Saturday on the European Tour—one that reverberated through the professional ranks here and abroad. Yet it’s doubtful being second fiddle in this instance mattered one iota.

A win, whenever it comes, is a welcome blessing.

In his 80th PGA Tour start, fighting nerves, elements and a hot golfer appropriately named Burns, Lee was a picture of composure when he birdied his final two holes to beat Louisiana native Sam Burns by three strokes in a shootout in McKinney, Texas. After a weather delay of 2 hours, 23 minutes, Lee finished off a six-under 66 at TPC Craig Ranch and grabbed the final qualifying spot in this week’s PGA Championship at the Ocean Course at Kiawah Island.

When he tapped in from inches away on the 72nd hole, Lee hugged his caddie, Brett Waldman, a secret weapon of sorts who had finished T-14 at the second stage of PGA Tour qualifying at TPC Craig Ranch in 2010. Then he was greeted by his wife, Joo Yeon Yu, who is expecting the couple’s first child in July. Finally, he accepted a congratulatory embrace from countryman K.J. Choi. As he approached the tour’s most successful Korean player, Lee bowed twice.

But he bowed to no one else on a day marred by heavy rains.

“Long time for me to wait for the win,” said Lee, 29, who previously had posted victories in Japan and South Korea before joining the PGA Tour in 2019. “Very hard conditions for everybody today. I tried [to stay] patient and keep playing positive. Still can’t believe now what happened.”

Beginning the day one stroke behind Burns, who had broken through for his own maiden victory in his previous start at the Valspar Championship two weeks ago, Lee birdied four of his first six holes to seize control. He then maintained his composure amid worsening weather conditions that had been expected, prompting tee times to be moved forward for an early finish.

It wasn’t early enough. Lightning forced suspension of play at 1:52 p.m. CDT, leaving Lee and eight others remaining to complete the tournament.

When play resumed at 4:15 p.m. local time, Lee faced a 15-foot par putt on the 16th hole. He left it short for only his second bogey of the week, and his lead slipped to two strokes over Burns. Never was a bounce-back more important. Instead, Lee, whose given name is Kyoung-Hoon, executed a pounce back.

With rain starting up again, Lee steered a pitching wedge from 130 yards to within four feet left of the cup, well inside Burns’ tee shot that checked up 14 feet away. Burns didn’t get his putt to the hole. Lee, ranked 137th in the world to start the week, then calmly popped his in. His two-putt birdie at the last completed a 25-under 263 total on a course that didn’t put up much resistance in its debut as host of the Dallas-area event.

“Yes, very important shot at 17,” Lee said, doing his best to answer all the interview questions in English, in itself a winning move for his efforts. “When I play 16 make bogey and maybe feels like little lose momentum some, but I tried [to be] more aggressive on 17, 18. And good shot on 17, so more make good momentum and good finish.”

“He played awesome,” Burns said of Lee. “I was really proud of him. When it was tough, he hung in there and he got off to a great start. It was kind of gettable in the beginning. Got off to a really fast start, and then kind of midway through got tough for everybody, and he kept hitting one shot after the next and never gave anybody a chance.”

The difference this week for Lee, whose only other top-10 this season was a T-2 finish at the Waste Management Phoenix Open, was his work on the greens. He put a new Callaway putter in the bag, not a bad idea when you rank 178th in strokes gained/putting. The improvement was significant; he was ninth for the week in putting at 1.127 strokes. That complemented his ball-striking, as he ranked second in approach and tee to green.

Lee lives in Lake Nona, Fla., and is the eighth native of South Korea to win on the PGA Tour. Together with Sung Kang’s win in the 2019 edition (the 2020 event was canceled due to the pandemic), it marks the first time that Korean-born players captured the same event consecutively.

Kang also waited behind the green as Lee was finishing up. It meant a lot to the new champion.

“I’m really thankful very much to K.J. and Sung Kang,” he said. “I didn’t think about they wait for me, but he [K.J.] wait for me and [say] ‘Congratulations K.H., you’re so good.’ Always they are very kind for me.”

The fifth man to win his first tour title this season, Lee rides considerable momentum into the PGA Championship, at which he will make his debut, playing in just his third career major.

“Still, I can’t believe now,” he said with a smile. “After this time, more believe in me and more strong my mind. So, I think perfect for me.”

In that regard, his timing was just right.