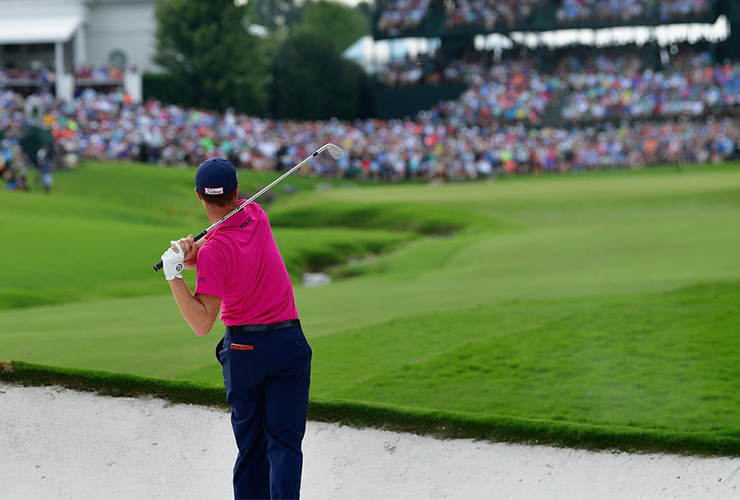 Justin Thomas, a kid from Kentucky, the littlest big man out there, won the 99th PGA Championship Sunday by staring down doom. It’s always there, doom. The golf gods, ever ready to deal in black humor, make sure of that.

Here they’ve even given doom a proper name. It’s The Green Mile. It’s the last three holes at Quail Hollow Club. The name is borrowed from Stephen King’s book, “The Green Mile,” in which pretty much everybody dies, most of them electrically toasted by “Old Sparky.”

So when Thomas stood on the 17th tee with a one-shot lead over a bunch of guys who, like him, were eager to win their first major championship, he had good reason to wonder where this story was going. King’s Death Row characters walk their last mile on a tile floor painted lime green. Quail Hollow’s green is more vivid, though no less dreaded.

“Adrenaline was flowing,” Thomas said. Not that he needs much. He’s 5-foot-10, 175 pounds, and he hits it a ton. The way he does that is the way we used to wind up the rubber band on a little wooden airplane’s propeller, then let it go, and the thing flies. Justin Thomas just winds himself up until he snaps back at the ball. Out of a fairway bunker into a greenside bunker and out to six feet, he had made a par-saving putt at 16 and moved his lead to two shots. Or maybe one. As Thomas said later, “It was a crazy day.”

This crazy: With an hour and a half to play and everyone on the back nine, seven players were separated by only two shots. Thirty minutes later, five were tied for the lead at seven under par: Thomas, Kevin Kisner, Chris Stroud, Hideki Matsuyama and Francesco Molinari.

But good things had already happened for him. At the 10th, his drive went into a tree and he said to the ball, “Get lucky,” and he said to the tree, “Spit it out for me,” and the ball bounced sideways into the fairway, and Thomas told his caddie, “That’s why you ask.” Then, when his short birdie at the 10th, teetered on the razor’s edge of the cup, “I threw a little child tantrum,” and, as he took five steps away, damned if the ball didn’t fall into the cup. Three holes later, he chipped one in for a birdie. “The most berserk I’ve ever gone on the golf course,” he said. This story was turning strange.

“I needed to land it about 200 … I hit a stock 6-iron at home 200 yards, and I never even thought about anything but a 7. I’m like, aim it just inside the right edge of the green, put it back in the stance and just swing at a 7, because it’s not a position to try to finesse something. You’re pumped up, you’re feeling it, and you’re kind of not full bore, but you want to swing at something.”

He dropped it 15 feet from the pin.

“That shot, I’ll never forget that vision in my head.”

Before I could scribble it, Thomas did it. A birdie. A two-shot lead going to 18.

One by one on The Green Mile, the other guys died.

Louis Oosthuizen three-putted from the next county at the 16th.

Patrick Reed, needing birdies, was thrilled to make pars at 16 and 17 before sending his drive on 18 into a bunker from which reasonable escape was impossible.

Kevin Kisner called that stretch of holes “just brutal.” For the day those three holes produced 53 bogeys, 14 doubles and 11 birdies. They called for work seldom needed by these guys. To reach the 16th, Kisner hit driver and 5-iron. The 17th, a 5-iron. The 18th, again driver and 5-iron. His last, desperate hope at the 18th—he needed to hole it from the fairway to catch Thomas—failed when his second turned left halfway to the hole and into a stream. He blamed mud on the side of the ball. 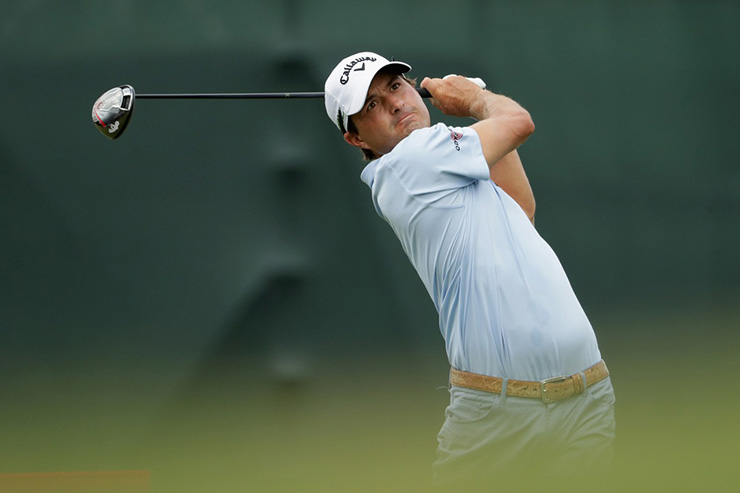 That odd turn was, in fact, the sort of inexplicable stuff that Stephen King imagines, the Stephen King who created his own Green Mile and caused an old prison guard to say, “But, oh God, sometimes The Green Mile seems so long.”

He’s only 24 years old. But he had won three PGA Tour events this year. He had shot as 59. He had shot a 63 in the U.S. Open. He had been in the heat a million times. However long The Green Mile might be, it was for Justin Thomas a walk in the park.