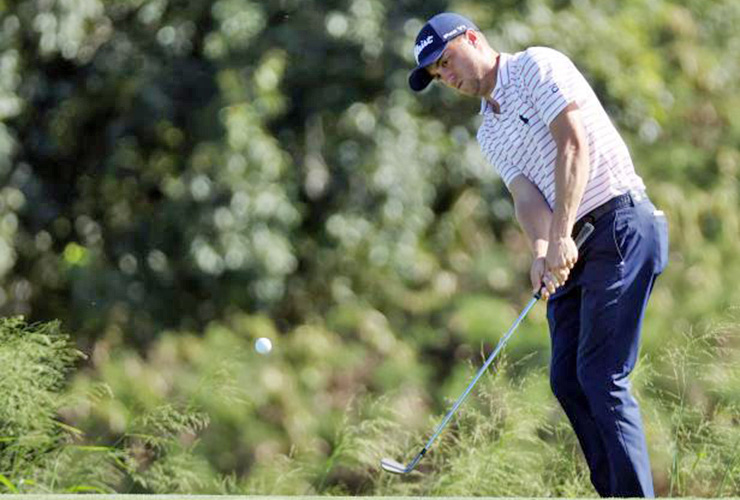 By Brian Wacker
A day after apologizing for the use of a homophobic slur during the third round of the Sentry Tournament of Champions, Justin Thomas admitted the incident still weighed heavily on him during Sunday’s final round.

“Golf wasn’t the main thing on my mind,” he said. “Usually being four back going into Sunday I’m thinking about one thing and one thing only and that’s trying to win the golf tournament. But obviously had a lot of other things on my mind last night.”

Still, the 27-year-old managed to charge into contention anyway, making five birdies in his first 13 holes to climb within a stroke of the lead. Then he added two more on Nos. 15 and 16 to keep pace.

But a three-putt bogey from just inside 50 feet on the 17th meant that he needed to eagle the par-5 18th to tie clubhouse leader Joaquin Niemann. From 260 yards, Thomas’ 4-iron tracked toward the flag but the shot came up about a yard short of the green and the ball trundled helplessly to the left of the green. Needing a chip-in to keep his hopes alive, the shot scooted six feet by the hole.

Thomas, who was looking for his second straight win in the event and who also was the champion in 2017, finished with a seven-under 66 and one shot out of a playoff between Niemann and Harris English, which English went on to win on the first extra hole.

Afterward, it was evident the previous day’s events, in which Thomas used a slur following a missed putt on the fourth hole, continued to bother him.

“I clearly screwed up,” he said. “I made a terrible, terrible judgment call. But I thought a lot last night that, we grow a lot as people over time. I wish that I could learn to grow a different way than the way that I chose to do it, but unfortunately it’s in the past and there’s nothing I can do about it now.

“It definitely was a distraction out there today. But now I just get to take time going forward and try to become better because of it.”

Thomas is not in the field at next week’s Sony Open in Hawaii.