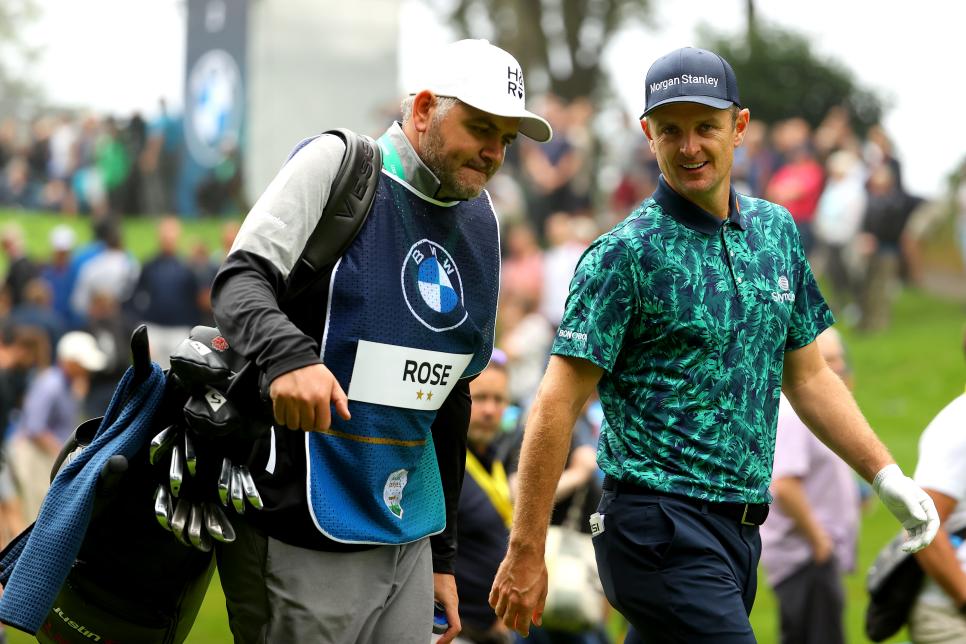 By John Huggan
VIRGINIA WATER, England — It was Arnold Palmer who first came up with the line that nothing in golf is harder than making a birdie when you absolutely have to make one. Which makes Justin Rose’s opening round of five-under-par 67 in the BMW PGA Championship at Wentworth all the more impressive. The 41-year old Englishman has to at least play well – and preferably win – the European Tour’s “flagship” event if he is to make a sixth consecutive appearance in Old World colours at the Ryder Cup later this month. So he has to “birdie” 72 holes, not just one.

Five times Rose dipped under par around the Burma Road course, where he has twice been runner-up in 15 previous starts. But it was the finish to his day that pleased him most and impressed his playing partner, former Masters champion Adam Scott. After a perfect drive around the left-to-right dogleg on the 523-yard par-5, Rose had 236 yards to go into a freshening breeze and with water short and left of the green. Daunting.

“The shots Justin hit into the last were very impressive,” said Scott. “He chip-cut a driver round the corner off the tee. That was a nice little play. Then he cut the 5-wood into the green. The ball landed dead soft. He played the shot perfectly. But both were world-class.”

In the bigger picture, Rose was making equally positive reviews about a day that started as well as it climaxed. All of which is in sharp contrast to the desultory play that saw the former U.S. Open champion fail to qualify for the recent FedEx Cup playoffs. Seventh at the Masters and T-8 in the PGA Championship hint at some decent play, but Rose’s only other top-tens this year have come in Saudi Arabia (T-2) and in last month’s Wyndham Championship (T-10).

No matter. Today was another day. The first three holes at Wentworth are notorious for their difficulty, even in benign conditions. It is easy to go 5-3-5 against the par of 4-3-4 and be, as Scott said, “on the back foot.” But Rose made light of it all. Standing on the fourth tee (for 35-minutes because it is a reachable par-5) he was already under par (4-2-4). So he had plenty of time to think, his mind, almost inevitably, drifting to matters Ryder Cup, a state of affairs the watching Scott was well aware of.

“He’s under pressure, yes,” said the Australian. “But Justin is world-class. He’s one of the best players of this generation. When the pressure is on, he has shown an ability to lift himself. He’s done that many times. And he’s a major champion and former world number one. You’ve got something in you to be able to do that kind of stuff. I wasn’t surprised he played so well and it was nice to see.”

Back inside Rose’s head, the battle to stay in the moment eventually won out over thoughts of what is to come on Sunday evening, when Harrington makes his three wild card selections.

“Plan A is obviously to win; Plan B is just to play well enough to give (European Ryder Cup skipper) Padraig (Harrington) something to think about,” confirmed Rose. “I covered both of those bases today. It’s a really nice start to the tournament, one that gives me the chance to focus on what I should be focused on. All aspects of my game were pretty good. I managed myself well. I felt like I did a good job of respecting the course. And I took my birdies when I could, although I had run from 14 through 17 where I could have made a couple more. I left two putts short on-line. Then again, when I did miss it in a bunker I got the ball up-and-down. I’m very happy.”

Now, of course, Rose has to stay that way for another three days. Maybe only one thing is for sure: Captain Harrington will be watching with interest.