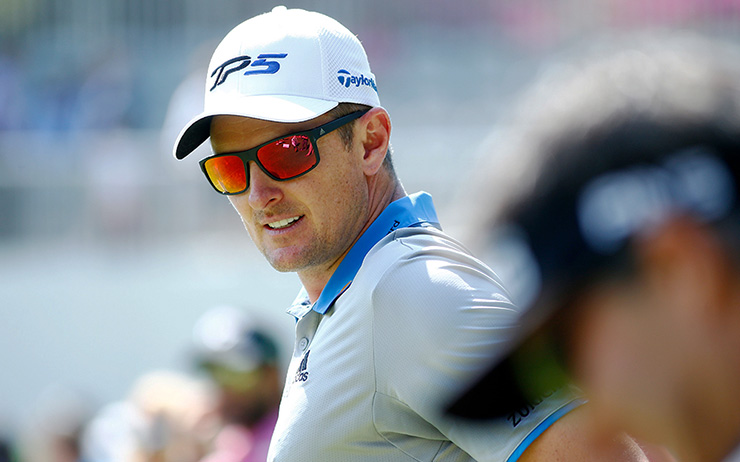 Should Justin Rose be one of the favorites for next month’s Masters Tournament? Perhaps. The 2013 U.S. Open champion has really good history at Augusta National, and while he hasn’t had a victory in 2017, he has some strong finishes. We caught up with the 36-year-old at an event in New York City for Adidas’ new apparel line. Five questions from our Golf Digest Podcast with Rose are included here.

1. 2017 has been a quietly consistent year for you. What’s been clicking so far?
“It has been [a good year]. Last year, was all about the gold medal for sure. It wasn’t really a great year for me, there were a couple of injuries that kept me from being my best. In the offseason, I tried to re-evaluate, and it made me hungrier. I didn’t want another season where I was on the fringe of things. Coming out and having a strong start has been important. Like you said, three top-five finishes, that’s something on which to build. I don’t feel like I’m really at 100 percent yet. My iron play could be a lot stronger, but it’s nice to have top-five finishes knowing there’s a couple of gears left in there for me. So hopefully I’m trending toward Augusta, hopefully I can peak then. But what’s been working is I’ve been driving the ball incredibly well. At the WGC in Mexico, I didn’t have a great finish, but I was No. 1 in strokes-gained/driving, so I’m setting myself up for a good week with playing well off the tee. It’s been a good start to the season. My putting has been a little more solid—I’ve changed to the claw technique so it’s done pretty well for me.”

2. It’s been an interesting season, with young players and marquee players playing very well with Hideki Matsuyama, Justin Thomas, Jordan Spieth and Dustin Johnson recording wins. Is it a coincidence that all these guys are playing well, or are they feeding off each other?
“I think they’re separating themselves from the rest of the other guys right now. If you look at the world rankings, they’re probably the strongest they’ve ever been. Really, those guys have played some incredibly good golf. But it’s not just them: The strength and depth on tour is incredible right now. You’ve got some of the guys, the older guys like myself, Henrik Stenson, Bubba Watson, guys who haven’t had the best start to the season, but who are capable of elite-level golf. It’s really hard to win on tour right now. A lot of guys have had strong starts to the year, but what’s really important to remember, for me, and it’s certainly not diminishing any tournament and the importance of each event for the FedEx Cup race, but for me, it’s about April to September, that’s when you’re going to make your name in the world of golf—at the majors, the World Golf Championships and the FedEx Cup events. So for me, if you can peak pretty much through the summer, that’s when you choose to have your A game.

3. As we get closer and closer to the Masters, what do you do specifically in preparation that you find works well at Augusta National?
“I’ve changed it a little bit over the years. This year, for example, I’m actually going to play Houston the week before the Masters. The last time I did that, I finished second in the Masters to Jordan Spieth in 2015. But I kind of felt like, I wanted to play my way into Augusta this year. You can think about the Masters for too long leading up to it, so I think playing Houston will sort of curb my enthusiasm for an extra week, and then hopefully I’ll get into Augusta ready to play. Adding Houston to my schedule meant something else had to give, so that meant I’m skipping out on the WGC-Match Play, so there are always tough decisions to make. And for me, missing the Match Play is about properly preparing for Augusta. Obviously, I wanted to play Bay Hill the first year after Arnie’s passing, and given Mastercard’s involvement and I’m a Mastercard guy, it meant a lot to me, especially in my old hometown of Orlando.”

4. You talked about your age—but you’re in the prime of your career at 36. Given how well the 20-somethings are playing, is it a motivator to make you play your best, or does it just speak to the depth of the tour like you talked about?
“I don’t feel like I have to adjust because my best is good enough. If I can just figure out how to produce my best more regularly, that’s really the key. And that’s what those guys are doing—they’re finding a way to play more consistently at a higher level. And that’s what my goal is. So I have to identify the areas of my game that are letting me down. Right now, it’s my iron play, which, funny enough, has always been my strength, so that’ll be a fairly easy fix. And actually in Mexico, even though I didn’t have a great week, I felt really enthusiastic that I learned a lot. So it wasn’t a week that I didn’t perform too well, but I felt I really was able to take a step forward, and so my goal is to build on that and take it into the rest of the year.”

5. Have you had a chance to dig into the proposed new changes to teh Rules of Golf? And if so, what are your thoughts?
“A little bit, yeah. And I think most of them make sense, because many of golf’s rules are archaic, although we get used to them and they feel normal. But if you were to re-write the rules, why wouldn’t they be like the way they’re going to be now. The only one I really totally disagree with, because they’re all designed to speed up the pace of play, essentially; the one I really have a big problem with, I suppose, is the fixing spikemark damage on the greens. Because the way the rule is written is that you can fix damage. And very little damage on tour these days is damage coming up, it’s more cleat marks going down. So to fix that damage, like a ball’s mark on the green, you’ll be there forever fixing blemishes on your line. So I think that’s counter to every other rules change. That’s just my opinion; I think it’s great that they’re trying to modernize things. There comes a time in any business that you have to look at the rules and regulations, and you have to fix some things a little bit. But to me, when they’re trying to push us to play faster on tour, this one is going to be counter-productive.”