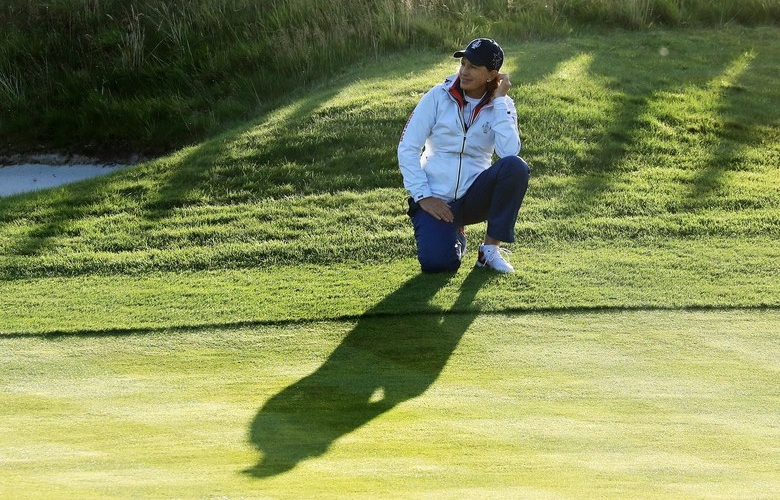 Team USA captain Juli Inkster watches the action during the final day singles matches of the Solheim Cup at Gleneagles on September 15, 2019, in Auchterarder, Scotland. (Photo by David Cannon/Getty Images)


By Keely Levins
GLENEAGLES, Scotland — This Solheim Cup ended differently than the last two for U.S. captain Juli Inkster. Her first time leading the Americans came in 2015, after the team had lost twice in a row to the Europeans. Under her leadership, the U.S. was victorious that year in Germany, and two years later the Americans won again at Des Moines Country Club in Iowa.

No American had ever captained three Solheim Cups teams, much less winning three straight. But the American players respected Inkster, making her third time as captain possible and a three-peat seem plausible.

At least until the final putt in the last match on Sunday at Gleneagles. Veteran Suzann Pettersen made her six-foot birdie putt to give Europe a one-point victory.

The loss made for a more solemn media conference than those Inkster has had previously.

“You know what, I told them afterwards, the sun’s going to come up tomorrow,” Inkster said. “It was great for women’s golf. We played great. I mean, yesterday was just a brutal day of golf. And today the sun came out and we saw a lot of great golf. You know what, the Europeans played great. You tip your hat. And you move on to Toledo.”

Inkster’s perspective is one of the things that has made her a great Solheim Cup participant, as a player and captain. She played in nine Solheim Cups, four of them losses, five wins. She knows what losing feels like and understands that the sting is fleeting.

“I’m really happy where I’m at,” she said. “I’ve had the honour to do this three times. And it’s been an honour. And I’m 2-1. We’re 2-1. I thought that’s been good. I’d be making a lot if I was a baseball player. It’s not really about the wins and losses. It’s about the memories and the camaraderie.

It’s clear that Inkster does love her role as captain, even in this year’s loss. She has become an institution within the Solheim Cup. Not surprisingly, the same question that has come up in the last two post-Solheim Cup media conferences came up again this year: Would she be willing to captain again, in 2021? The answer was an emphatic, No. But Inkster said she will be on-site at Inverness Club in Toledo, Ohio, supporting the team. For that, her current players are grateful.

“She just encourages us to play with heart and class and integrity,” said Lizette Salas, with Inkster tearing up beside her. “And that is something that … it’s indescribable. And she’s an incredible role model on and off the golf course. And this team is going to miss her.”