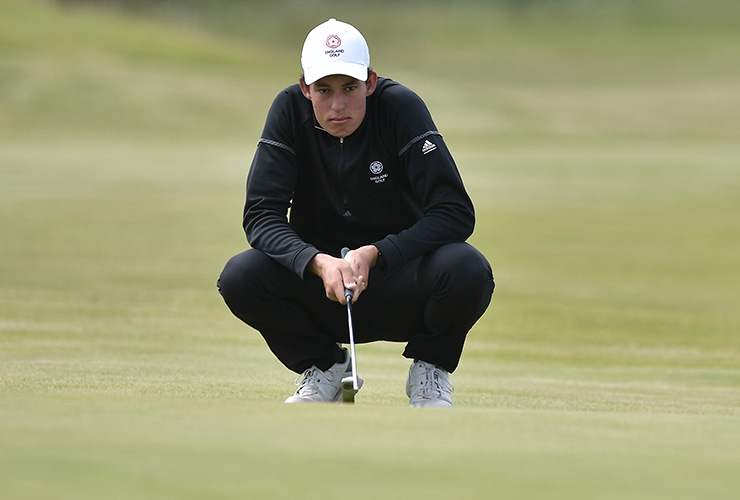 By Kent Gray
Josh Hill’s at times heartbreaking but mostly highly encouraging summer campaign in the UK has been rewarded with selection to the Great Britain and Ireland team for this month’s prestigious Jacques Léglise Trophy.

The 17-year-old Trump Dubai member has been named in the nine-man GB&I lineup to meet Europe in the annual U-18 boys international fixture at Falsterbo Golf Club in Sweden on August 27-28.

It is further validation for Hill who is not, but could quite easily (on paper at least), be confused with new GB&I team-mate Joshua Hill of Ireland. The Dubai-based Hill, who became the youngest winner of an Official World Golf Ranking event when he captured the MENA Tour’s  Al Ain Open in 2019, has just helped England win the Home Internationals, no doubt sealing his Jacques Léglise Trophy selection by going unbeaten in six matches at Woodhall Spa earlier this month.

It continued an increasingly impressive UK summer for Hill who narrowly missed out on a playoff at the St Andrews Links Trophy (4th) in early June before reaching the last 32 of the 126th Amateur Championship at Nairn and the quarterfinals of the English Amateur in Yorkshire. He also reached the round of 16 at last week’s R&A Boys’ Amateur Championship, won by Jack Bigham, at Royal Cinque Ports on the Kent coast.

Next up is the Brabazon Trophy, the English Men’s Open Amateur Stokeplay Championship which opens at Ganton Golf Club today.

The Jacques Léglise Trophy debuted in 1958 and ran until its suspension in 1966. It was rejuvenated in 1977 in memory of Jacques Leglise, a past French champion who served as President of the French Golf Federation and of the European Golf Association.

GB&I dominated the early encounters losing only three times before 1995 but Europe has since won seven matches including the last fixture in 2019 when they triumphed 5½ – 9½ at Aldeburgh Golf Club in England. GB&I last won in 2018 at Kytäjä Golf, Finland thanks to a 15½-9½ win and leads the overall series 29-13 with one match tied.

The GB&I team is selected by The R&A and the Continent of Europe side by the European Golf Association.