Hill’s confidence unshaken after missed cut: ‘I feel like I can compete with these guys’ 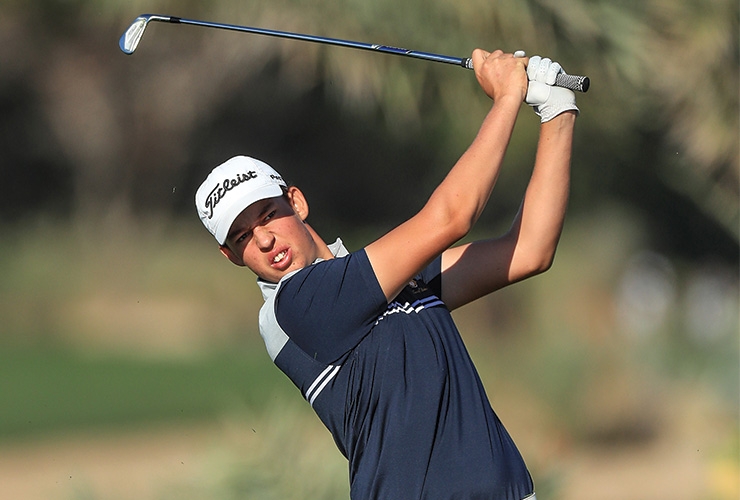 David Cannon/Getty Images
Hill plays his second shot on the 14th hole during the second round of the Abu Dhabi HSBC Championship at Abu Dhabi Golf Club on January 17, 2020.

By Kent Gray
Josh Hill might have missed the cut in his bittersweet European Tour debut but there will be no weekend off for the teen.

Another uncooperative day with his driver stymied any chance the 15-year-old Dubai amateur had of recovering from an opening 74, a Friday score two worse sending him home +6 for the Abu Dhabi HSBC Championship in a share on 117th place in the 132-strong field.

Hill missed the cut by seven strokes but that only served to send him back to Dubai doubly determined to show what he is made of at next week’s Omega Dubai Desert Classic.

Asked what he had learned from his second-round 76, Hill retorted: “I learned that Mattias [Austrian playing partner Mattias Schwab who is -4] is a good putter. He holed everything. So I’m going to go away and hit a lot of drives and hit a lot of putts and hopefully that will improve for next week.

“You can’t really miss fairways around here. As soon as you miss a fairway you’re out of position and you’re struggling to make pars and that’s what happened today and yesterday. But that’s been the story for the past 18 months so I need to start working really hard on my driving.”

Hill will still take much from the week, the highlight of which was a partial practice round with Brooks Koepka where the teen beat the world No.1.

“It’s been really fun, it’s been a great experience playing with Charl [former Masters champion Charl Schwartzel] and Mattias. Disappointing the way I’ve played but I’ve learnt a lot from it and hopefully I can take that into next week.

“I feel I handled the pressure or the expectation quite well, feeling nervous on the first tee and just getting out there and having fun. So I’m pretty happy in some places but overall I’m a bit disappointed.

“I’m really looking forward to next week because I feel like I can compete with these guys when I hit fairways. I keep saying…hit fairways and hole putts.”