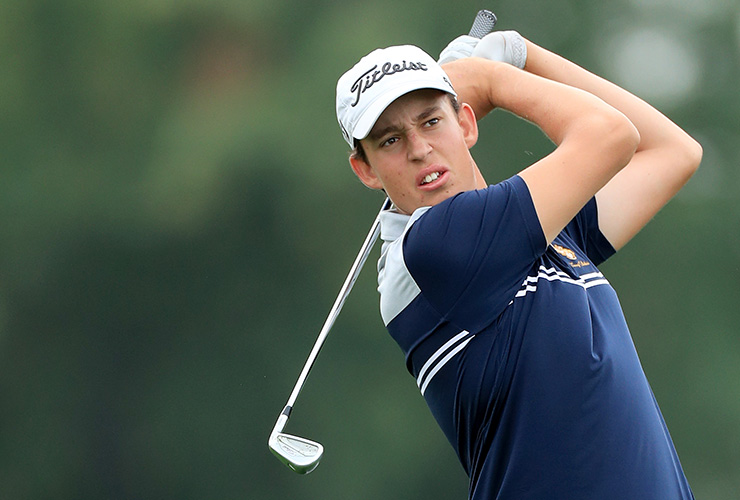 By Kent Gray
Josh Hill remains on a collision course with English star Jack Dyer after squeezing into the final 32 at the 126th Amateur Championship at Nairn Golf Club in Scotland.

The 17-year-old Trump Dubai member edged past Iceland’s Sigurbrandsson Dagbjartur 1up in the first round of matchplay on Wednesday to set up a 9.41am (12.41pm UAE time) meeting with Irishman Robert Moran today.

Now, if the England Boys’ international can get past Moran, the WAGR No. 395, and equal his feat of reaching the final 16 at last year’s British Amateur at Royal Birkdale, he’s set to meet Dyer later on Thursday – presuming, of course, that the Walker Cup player isn’t upset by Scot Lewis Irvine.

Irvine has his work cut out for him. After finishing second in the 36-hole strokeplay qualifying phase, Dyer cruised past his first round opponent, Norwegian Markus Braadlie, 6&5 for the equal biggest win on Wednesday

But that is for later. For now, Hill, ranked 258th  in the WAGR, needs to overcome Moran which will be no cinch. The Dubliner is fresh from winning the Ulster Men’s Strokeplay title at Royal County Down and backed that up with a top-20 in the St Andrews Links Trophy, an event in which Hill finished T-4.

Check out the other challenge facing Hill and co. today – the tricky Nairn layout – in this handy guide from the R&A:

You can also check out all the highlights from the first round of matchplay here: