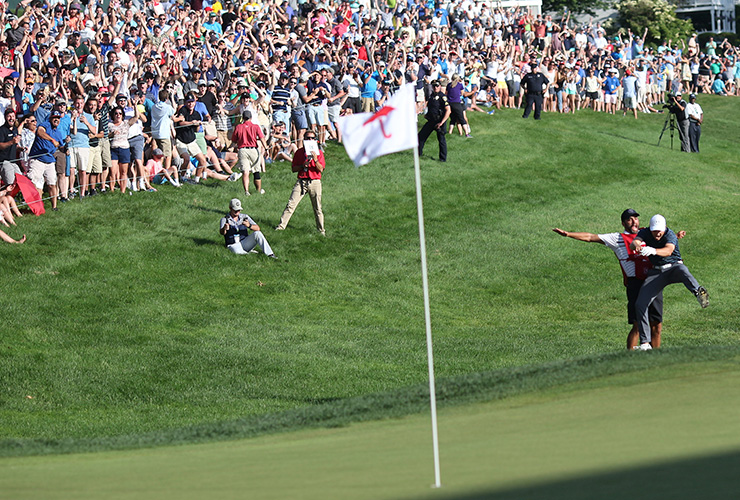 Jordan Spieth’s reaction to his winning bunker shot on Sunday at the Travelers Championship might have been even better than the shot itself. Well, rather the reaction by Spieth and his caddie, Michael Greller.

While Spieth’s club toss got most of the attention, Greller’s rake toss was even better. Factor in that the two happened simultaneously — and of course, the ensuing (attempted) chest bump — and this jumped right to the top of all-time golf celebrations.

You’ve probably seen Spieth’s shot and reaction a bunch of times by now, but here’s an angle that focuses on Greller’s toss. In slow-mo, no less:

PGA Tour caddies often keep the flag from the 18th hole at tournaments won by their bosses, but Greller will bring back a special memento from TPC River Highlands. That rake.

Nice touch for Spieth's caddie Michael Greller after his man won the Travelers Championship from a green side bunker. #Champion'sRake pic.twitter.com/IT1wsfLhZ0

Even better, Greller won’t have to take it himself:

.@TravelersChamp will be sending the rake home via @fedex to Greller… https://t.co/ULCBYUVQKl

Good thing. That might have been tricky to get by TSA.