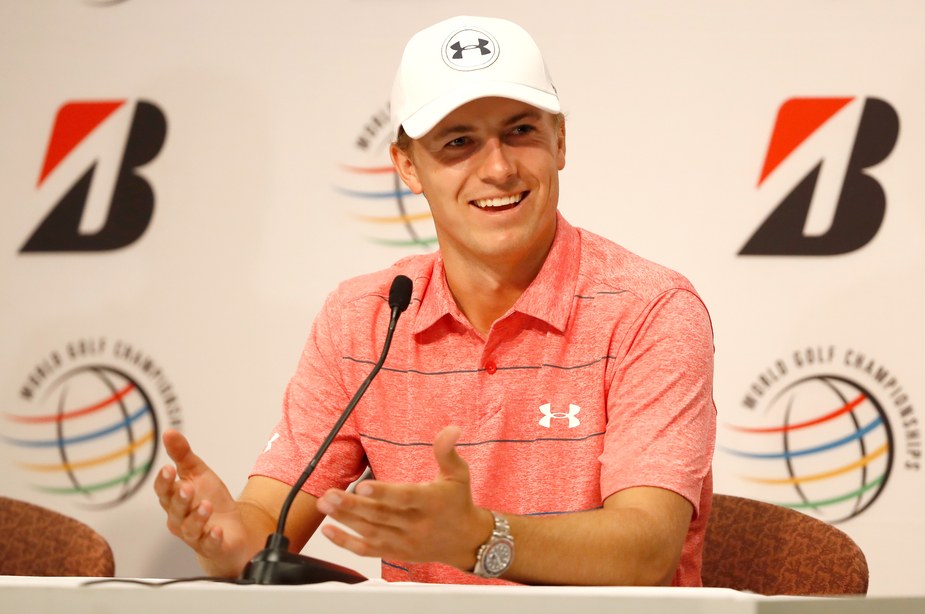 By Dave Shedloski
“I’m not really finding any negatives in this.”

Welcome to Jordan Spieth’s world. The newly-minted Champion Golfer of the Year is refreshed and back in the saddle for this week’s WGC-Bridgestone Invitational, where he will go for his third win in as many starts, but looming ahead is the year’s final major, the PGA Championship and a shot at a piece of history so few have realised.

It is golf’s worst-kept secret that Spieth, who just turned 24, has a chance to complete the career grand slam at Quail Hollow Club after his hypnotic Houdini act 10 days ago at Royal Birkdale yielded the third leg of said slam in the British Open at Royal Birkdale.

Given his recent run and the manner in which he pulled out of a seemingly irrecoverable tailspin at Birkdale to add the Claret Jug to his 2015 victories in the Masters and U.S. Open, Spieth will be the favorite in the 99th PGA, where he can join Tiger Woods, Jack Nicklaus, Ben Hogan, Gary Player and Gene Sarazen as players who have won all four major titles.

That this chance comes so soon after his victory in England is the kind of timing any player would welcome, thus, the previous remark when asked about the pros and cons of the impending situation.

“Pro is you believe you’re in form. I think I’m in form, and form is a huge part of being in contention obviously,” Spieth said Tuesday at Firestone Country Club. “But when you feel that way going in, it feels that much easier to get into contention. It doesn’t feel like you have to — mentally, I think, it’s just a little easier, so that’s a huge pro.

“I’m not really finding any negatives in this. I’ve been asked this a few times, and I mean this. … It’s just a major. I say that, they are still the four events that we try to peak and think most about at the beginning of every year. But this PGA, if I’m healthy and playing well, I play in 30 of them, I believe I’ll have plenty of chances to win them, but it doesn’t have to be this year. If it’s this year and it happens, that’s great, that’s another life-long goal that we’ve then achieved. But I believe that I’ll do it someday, so if it happens in two weeks or next week, then fantastic, and if it doesn’t, then it’s not going to be a big-time bummer whatsoever because I know I have plenty of opportunities.”

After some careful thought, Spieth did think of a downside.

“The con, and what makes it more difficult than just saying it’s another major, is that it’s one a year now instead of four a year that that focuses on, if that’s what the focus is.” But, he said, “my focus isn’t on completing the career grand slam. My focus is on this, is the PGA Championship.”

The pressure and attention that Spieth might well encounter next week isn’t likely to be much different than in 2015 when he ventured to St. Andrews to win the third leg of the calendar year grand slam, only the fourth player since 1960 with a shot at it. The others were Arnold Palmer in 1960, Jack Nicklaus in 1972 and Tiger Woods in 2002.

Again, no negatives in this. Spieth recalls arriving at St. Andrews and “felt so free,” he said.

“There was no care in the world,” Spieth added, remembering his thought process. “If it doesn’t go well, it doesn’t go well. I’ve accomplished more than I could imagine this year. I’ve exceeded my goals for the year by far. Back then, obviously still working really hard to try and maximise what I could the rest of the year.

“That’s how I feel right now. I feel like I’m free-rolling now. Not that I shouldn’t have before, but after Pebble and before Hartford [his other victories in 2017], I feel like I’m playing well enough and should be having better results for more chances to win, and I get off to two good starts in tournaments and been able to close them out.”

Refreshed. Free-wheeling. On a roll. Nope. No negatives.