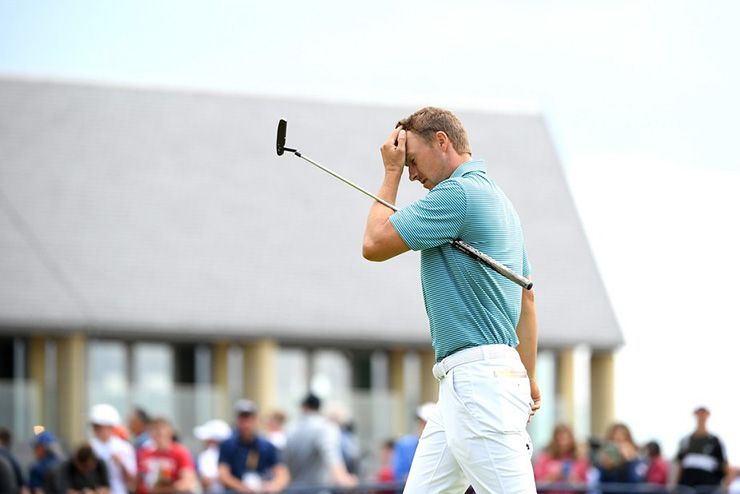 By Joel Beall
Jordan Spieth and his putter, historically a formidable combo, haven’t been simpatico this season. Following Friday’s round at the Northern Trust, they might no longer be on speaking terms.

Spieth, who ranked second on tour in strokes gained/putting just two years ago, entered this week’s event 140th in that category this campaign. A sentiment hammered home during his second round at Ridgewood. Five under on the tournament when he reached the 18th (he teed off on the ninth Friday morning) Spieth’s drive went out-of-bounds. He eventually found his way to the green with his fourth shot, but an attempt to save bogey from 21 feet came up six inches short, seemingly giving the three-time major winner a double.

Except Spieth missed that putt, a casual tap failing to get the ball into the hole:

Jordan Spieth just stubbed a six-inch tap-in while trying to putt it with one hand.

Jordan Spieth is all of us. pic.twitter.com/UQSRosKWcM

Spieth managed to right the ship, playing the final eight in one under. Unfortunately for the 25-year-old, his two-under score will leave him miles back of the leaders heading into the weekend. To claim this a “lost year” for Spieth is a bit dramatic; he finished third at the Masters and was in the final group at the Open. Conversely, given his last win was at Royal Birkdale—to say nothing of moments like Friday’s faux pas—2019 can’t come soon enough.

If you think this year was the first time the Masters’ status was in doubt, you’d be wrong.