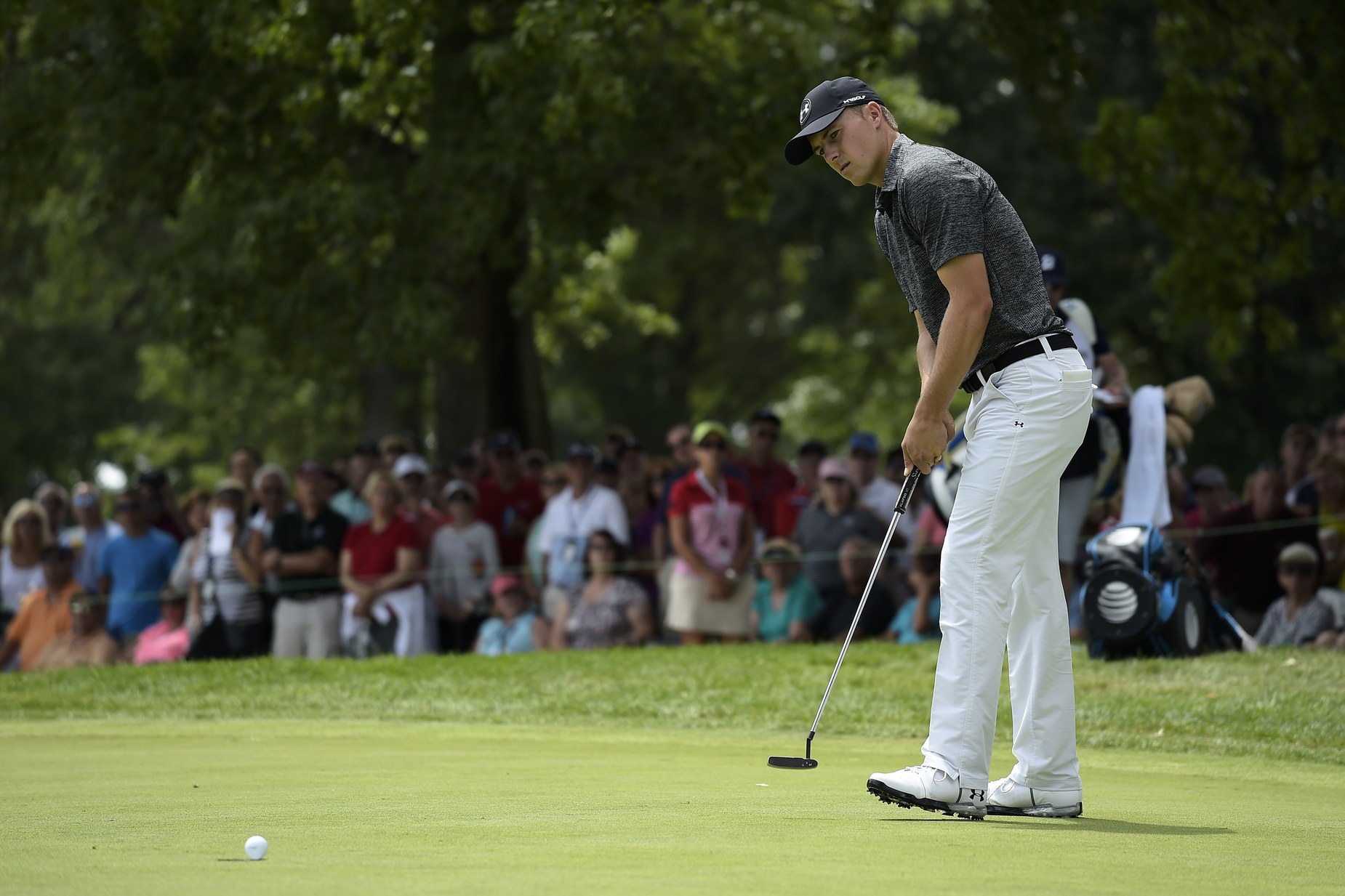 By Dave Shedloski
When Jordan Spieth missed his birdie putt on the first hole at Firestone CC Sunday afternoon, John Wood, who caddies for Matt Kuchar, couldn’t contain himself walking down the second fairway, turning to Spieth’s caddie Michael Greller and asking playfully, “Where was that two weeks ago?”

Spieth and Kuchar, the main protagonists in the The Open at Royal Birkdale won by Spieth after a breathtaking scoring run down the stretch, were paired together in Sunday’s final round of the WGC-Bridgestone Invitational. The stakes weren’t quite as high as they began the day well behind 54-hole co-leaders Zach Johnson and Thomas Pieters.

It was the second time in as many years the two were paired together the last day at Firestone, and each man carded a two-under 68, with Spieth finishing at four-under 276 and Kuchar a stroke behind at 277.

“It wasn’t expected to be bad blood,” Spieth said in his final warm-up before the PGA Championship, which begins Thursday at Quail Hollow Club in Charlotte, N.C. “A lot of respect, I think, was shown on both sides, and we assume and hope that we’ll get more opportunities like that.”

But it’s the opportunity that Spieth will have immediately before him that is important. A victory seven days hence would make Spieth, 24, the youngest player to win the career grand slam after his 2015 wins in the Masters and U.S. Open and last month’s triumph in the The Open.

Spieth was being, perhaps prudently, circumspect in his remarks about the potential to make history at Quail Hollow. He insists there is no urgency to complete the task this year.

“There’s definitely nothing taken for granted, but it [a win] doesn’t add anything to next week this year. It really doesn’t. I was thinking about it a little today on the course. You know, if you don’t win next week, next year, obviously, you focus on the majors, but does the PGA become kind of that one that’s starred? And that’s so long away; it’s 365 days away.

“In that sense, I’m excited for next week. I’ll just focus on it being the last major of the year and trying to work my way into contention. I had a chance to win and had some pretty fun, stressful weekends the last few events.”

The Dallas native has played Quail Hollow Club, traditionally the site of the Wells Fargo Championship, only once, finishing T-32 in 2013. Because Rory McIlroy twice has won the tournament, Spieth said, “Rory’s probably the guy to beat at this point next week. I played with him the first two days and the way that he is driving the golf ball, he continues to do it there, he just has a massive advantage over the field at that point. Someone who’s had such success there, he and Rickie [Fowler]. Phil [Mickelson has] played it really well. These guys that have good feelings there, yeah, the golf course is changed, but it’s similar enough that they’ve got good vibes around there, so we need to try to develop those before it starts.”

To that end, Spieth might get a jump on his preparation with 18 holes Monday instead of taking a day of rest, given that rain is in the forecast starting Tuesday. After a sputtering week at Firestone following wins in his last two starts, Spieth said about every part of his game needs a little tightening up.

“Each part of the game, there’s something that I need to just put in some work with, but I do know what it is and that’s the best part,” he said. “I had a chance to do something special today, but after nine holes, that was done and it was kind of nice playing a little relaxed golf. But I do miss the heat of things, and that’s the goal is to get back in the heat by Saturday, Sunday next week.”

Whether he likes it or not, the heat will be on him all week in Charlotte.