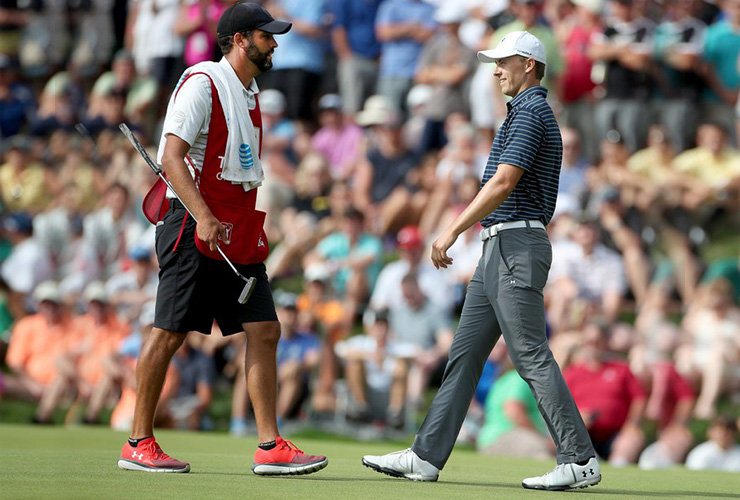 Jordan Spieth with caddie Michael Greller during the fourth round of the 2017 Travelers Championship. Spieth went on to win the event. (Photo by Tim Clayton – Corbis)

Jordan Spieth had just won the Travelers Championship with a dramatic hole-out for birdie from a greenside bunker in a sudden-death playoff against Daniel Berger. A few minutes later, Spieth’s caddie, Michael Greller, was on the hunt for the rake that he’d sent skyward when the shot went in and he and his boss embarked on a wild celebration that included golf’s equivalent to a bat toss from Spieth and a chest bump between the two.

Greller eventually found the rake, and he was keeping it. Then the moment hit him.

“Oooh, that’s going to count for double actually,” Greller said of the sand shot. “I think that makes it 12 or 13 for this year.”

Every year they’ve been together, the pair have made a bet. Greller sets the number of times Spieth has to hole out from off the green. If Spieth surpasses the total, Greller is on the hook for dinner—plus Spieth gets to invite anyone he wants to join them.

A few years ago in San Diego, the tab was for about 20 people. During last year’s Australian Open, it was Spieth who had to pay up, at Café Sydney, a fine-seafood restaurant nestled atop Customs House with sweeping views of the harbor and an extensive wine list.

This year’s number? Spieth has to get to 19.

“I think I’m in trouble this year,” Greller said. “Which is a good thing.”

Speaking of good things, Spieth is often criticized for not having the prettiest swing or being among the game’s best ball-strikers. Sunday, he certainly didn’t have his best performance in this area, with the 23-year-old hitting 66 percent of his greens.

But to suggest he struggles with his irons would be a bit misguided. The numbers this year suggest otherwise. Spieth leads the PGA Tour in strokes gained/approach to the green and is fifth in greens in regulation. He’s also 13th in approaches from 125-150 yards, second from 150-175 yards and seventh from 175-200.

“He’s been hitting the ball great all year,” Greller said. “If you listen to the narrative, he’s not a good ball-striker is what people would lead you to believe. When the putts drop and it matches up, you’re going to get weeks like this.” 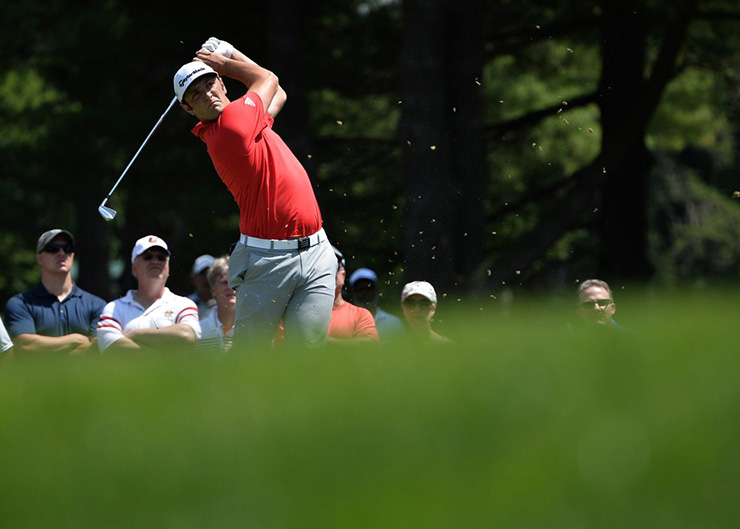 A year ago, Jon Rahm made his pro debut at the Quicken Loans National, opening with a 64 and eventually tying for third (which earned him a spot in the Open Championship). Turns out it was a sign of things to come. Three starts later, he finished second in Canada, and this past January he won at Torrey Pines in just his 12th career PGA Tour start. He also has added a handful of top-five finishes since.

This year, however, Rahm isn’t playing in Maryland but rather just outside of Paris at Le Golf National, site of the HNA French Open, one of the European Tour’s newly minted Rolex Series events. It’s the first of handful of starts across the pond for the world No. 11, who next week will play in the Irish Open (another Rolex event) and is in the field at the Open Championship at Royal Birkdale.

“I think it’s a great thing it’s doing for the European Tour,” Rahm said of the Rolex Series, a collection of eight tournaments each with a minimum $7 million purse. “I want to show as much support as I can, and I’ll try to play as many as I can. Obviously, I can’t play all of them, but I’ll try.”

Much the way the PGA Tour’s new 1-in-4 rule requiring players with fewer than 25 starts to add a new tournament they hadn’t played in the previous four years, the Euro Tour’s creation of the Rolex Series seems to be paying dividends. The strength of field projections for the next two weeks, plus the Scottish Open in three weeks, far exceeds that of the next three PGA Tour stops (Quicken Loans, The Greenbrier and the John Deere Classic).

On a side note, Le Golf National, a course Rahm played in 2009 as a young amateur, is also site of next year’s Ryder Cup. 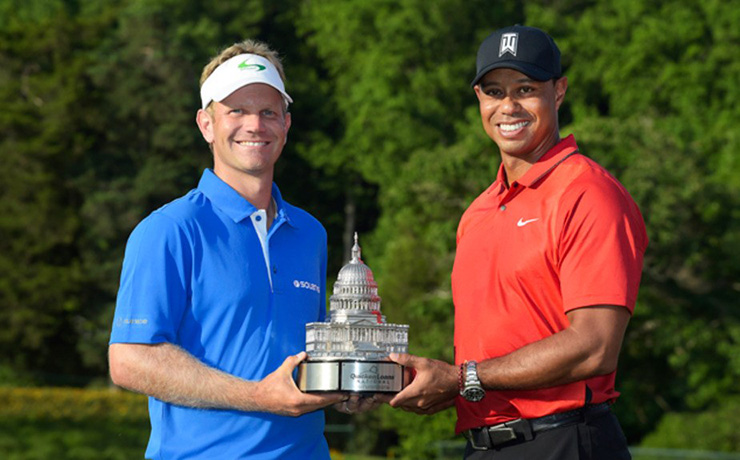 Being a winner on the PGA Tour doesn’t always equal instant stardom. Last year, Billy Hurley III won the Quicken Loans National not far from where he went to school at the Naval Academy and near his hometown in suburban Virginia. On a recent trip back to school, there was a parking spot with Hurley’s name on it. The only problem? Someone was parked in it.

“I don’t know what to tell you,” he cracked. “You would think at the Naval Academy they would follow rules.”

Similarly, he was at a local coffee shop and wearing a Masters shirt. Someone asked him if he was there, or if he simply got it as a gift.

“I enjoy those interactions really,” he said. “I wish I would have the wherewithal and the time to kind of take those to the next level.

“Hey, I’m not, you know, Dustin Johnson, Rickie Fowler. I’m not top-10 in the world like really, really recognizable players, and I’m fine with that. I guess it’s humbling. I walked into a coffee shop the day after I won and walked right by two of these guys talking about me winning and that sort of thing. I enjoy it, it’s kind of humorous to me.” 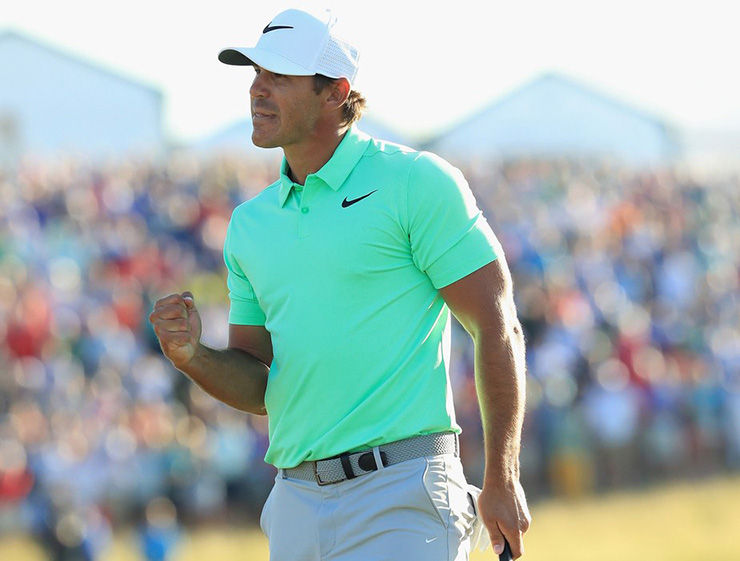 On Sunday night, I wrote about Spieth having that “It” factor. Want more proof? CBS’ 2.7 overnight rating for Sunday’s final round of the Travelers Championship was the second-best Sunday rating on any network to date this season. …

A lot of people pointed out that the winning score of the U.S. Open was 16 under on a 7,740-yard course versus 12 under on the 6,840-yard track for last week’s Travelers Championship. That’s missing the point a little. The numbers that matter were 272 at Erin Hills (Brooks Koepka’s final score) versus 268 at TPC River Highlands (Spieth’s winning total). …

It was a pretty good weekend for Cameron McCormick. He coaches Jordan Spieth and So Yeon Ryu, whose victory Sunday on the LPGA Tour catapulted her to No. 1 in the world in women’s golf.

This year’s Quicken Loans National moves to TPC Potomac at Avenel Farms, where the tour hasn’t been since 2006 (and 1987-2004 before that) following a major facelift to the property. Despite Tiger Woods’ name being attached to the event, the field is a bit depleted for a variety of reasons (date being one) with just three of the top 20 in the world and five of the top 30 teeing it up. Translation: The door is open for someone else to win. Two names to keep an eye on: David Lingmerth (below), who won there on the Web.com Tour in 2012 and has four-straight finishes in the top 26, and Brendan Steele, a good and oft overlooked driver and ball-striker who has netted three top-15 finishes in his last four starts. 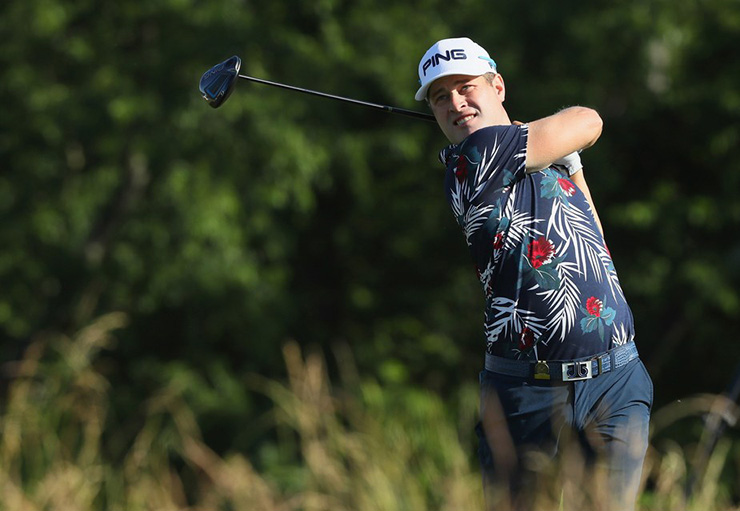