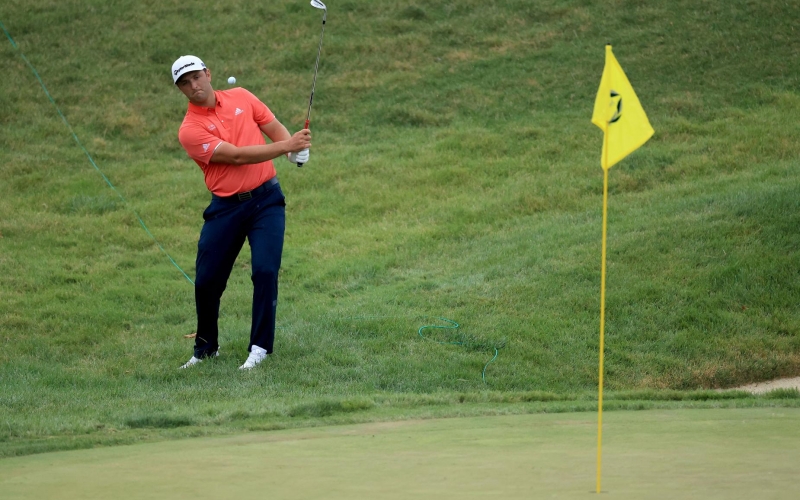 By Alex Myers
Welcome to another edition of The Grind and here’s what caught our attention this week.

Jon Rahm: The 25-year-old Spaniard is golf’s newest king after ascending to World No.1 with a dominant victory at the Memorial. Of course, it didn’t look quite so dominant after that late penalty (more on that later), but regardless, what a performance in what felt like his first major title given the field and difficult scoring conditions. 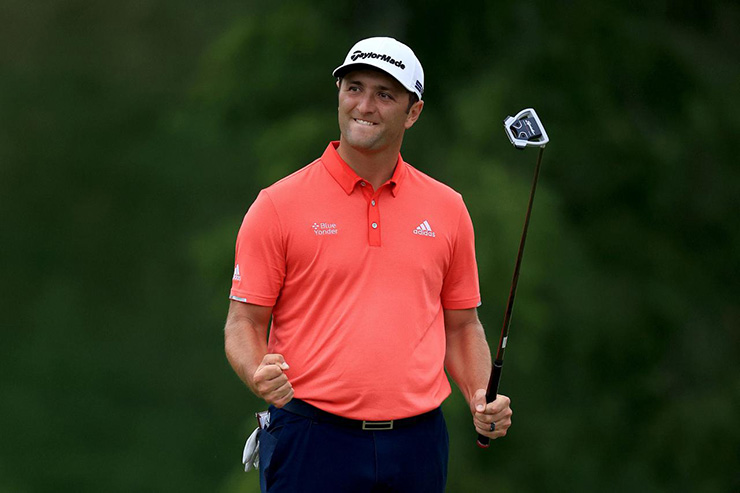 Rahm became the third-youngest, the fifth-fastest, and the second-ever Spaniard (after Seve Ballesteros) to reach No. 1. Impressive stuff from a guy who only seems to be scratching the surface. Golf fans should expect to see plenty of a different shade on Sunday for the next couple decades or so.

Christina Kim’s next career: The LPGA pro was a delightful addition to the golf broadcast this past week and we’d love to hear more of her. After her playing career is over, of course. She certainly had Golf Twitter chuckling when after Bryson DeChambeau expressed shock at missing a green left, she blurted out, “The ball’s above your feet, I mean, it’s probably going to draw.” Boom. You’d figure a scientist would know that. Anyway, our Brian Wacker caught up with her during the week to talk about her productive week while the LPGA is still off. 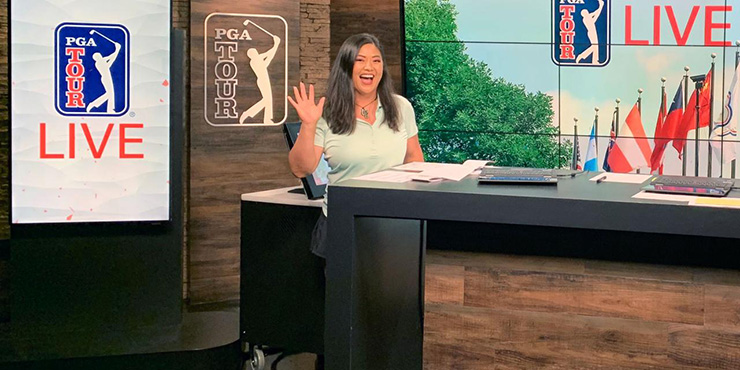 Matt Fitzpatrick on a Sunday on a tough track when he starts way back: In the two rounds with the highest scoring averages this season—the final rounds of the Arnold Palmer Invitational and the Memorial—Fitzpatrick has posted the only two scores in the 60s to make huge climbs up the leader board. I’ve got to remember this the next time I see wind in the forecast and a final-round pin sheet like this:

Jon Rahm’s penalty: What a bizarre bogey that turned out to be. Did his golf ball move? Yes, but there’s no way he could see it. And didn’t the PGA Tour get away from HD replays being involved in rulings? Also, here’s a great point:

Imagine if in the NFL, 1 team was allowed video replay and the other wasn’t. That’s what you have on @PGATOUR. Not every shot is videoed the same way, with same scrutiny or with same # of angles. Going back to replay for rules infractions is an unfair playing field. #Memorial

And here’s another tour pro offering his take on the situation in a slightly different way:

You know what moved…the tip of my junk when he holed it from there. Y’all can kick rocks

Seriously, that was one heckuva shot, especially given the situation. And I’m glad a replay didn’t cost Rahm the win. Full disclosure: I also bet on him to win so. . . yeah. . . I might have been just a bit biased.

Brooks Koepka: The four-time major champ finished solo seventh at Hilton Head a few weeks ago. Since undergoing a stem-cell procedure on his knee in the off-season, however, here are his eight other results on the PGA Tour: MC, WD, T-43, MC, T-47, T-32, MC, T-62. I’m not a doctor, but that knee might need some work. And if only there had been a three-month pause in the season to get it fixed. . . Of course, if Brooks reads this, he’ll probably sweep all three majors this year.

The World Handicap system: I had high hopes for the new system implemented by golf’s governing bodies this year, but it’s a total disaster. At least, for me. After entering seven (bad) scores, my handicap index hasn’t moved. Not a single tenth of a point. In either direction. Nothing. The result is I’m putting up embarrassingly bad scores for someone who is supposed to be a 7.8—and I’m running out of time to get more strokes before my annual golf trip/tournament next month. Please let me know if anyone else has experienced anything similar. Misery loves company. And other bad golfers.

The PGA Tour heads to the Land of 10,000 Lakes for the second annual 3M Open, AKA that tournament with a lot of water in play where Matt Wolff drained a walk-off eagle last year and Bryson DeChambeau gave us this classic reaction:

Bryson DeChambeau when he found out Wolff hit that putt… pic.twitter.com/JcN9FOxTQV

He didn’t even look that stunned this past Friday when he made that 10 at Muirfield Village.

Random tournament fact: Bryson is not playing this year. In fact, a lot of big names are skipping with a WGC and a major in the next couple weeks. 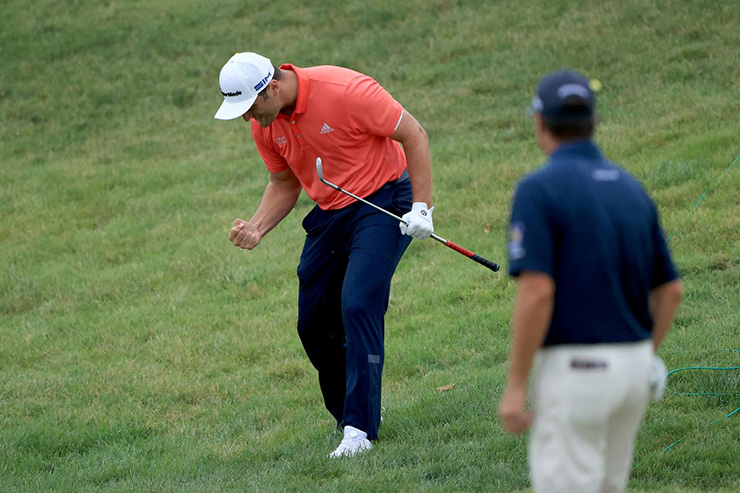 Again, penalty or not, that was awesome.

The European Tour has done it again, this time having three pros compete in a closest-to-the-pin contest from 300 yards. By hitting driver off the deck. And Marcus “The Bullet” Armitage stole the show:

Damn. These guys are good.

No longer in the running for “2020 Volunteer of the Year." pic.twitter.com/gBlrBCPQlV

“I’ve been preaching about [the golf ball going too far] for, goodness gracious … 43 years [ago] I first went to the USGA. I mean, that’s a long time to be studying something. Guys, stop studying it and do something! Will you, please?” —Jack Nicklaus, who took matters into his own hands by basically turning Muirfield Village into Winged Foot on Sunday. Glad to see I’m not the only person upset with golf’s governing bodies. Maybe Jack is ticked off at having a low handicap index as well.

OK, so it’s a screenshot, but this was remarkable. It’s Sergio Garcia after stroking possibly the worst putt in golf history: 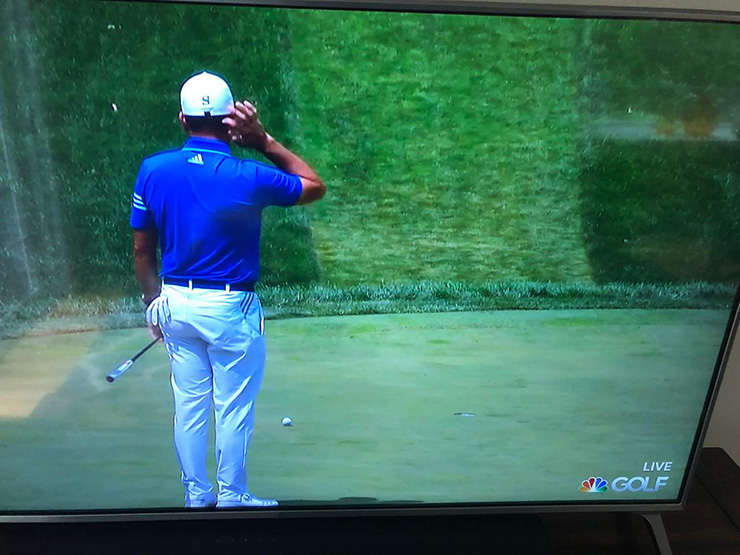 That’s tough to do.

Once again, there was a lot. Phil putted one from 78 yards:

Phil just LAID UP from 173 yards on the par-3 16th pic.twitter.com/nZwkvhA7Qd

Incredible. But the best Phil being Phil story comes from The Action Network’s Jason Sobel, who reported on an old bet Mickelson won with Colt Knost that Jon Rahm would reach the top 10 of the Official World Golf Ranking within a year. “There was a comma involved,” Knost told Sobel of the wager. Well done, Phil. I actually won some money off Rahm winning this week. Sadly, there wasn’t a comma involved.

Davis Riley is now one Korn Ferry Tour title away from the coveted and rare BATTLEFIELD promotion to the PGA Tour following win No. 2 at the TPC San Antonio Championship. Unfortunately due to COVID, that’s the only way he’s getting to the bigs before next season. . . . Congrats to Jack Nicklaus for edging Tiger Woods in the “Open for the Ages,” but my favourite part was Rory McIlroy’s final-round 63. Even in fake tournaments he continues to rack up backdoor top 10s! And finally, congrats to Nicole Rae and Liam Byrne for winning Golf Digest’s fourth annual Trainwreck tournament: 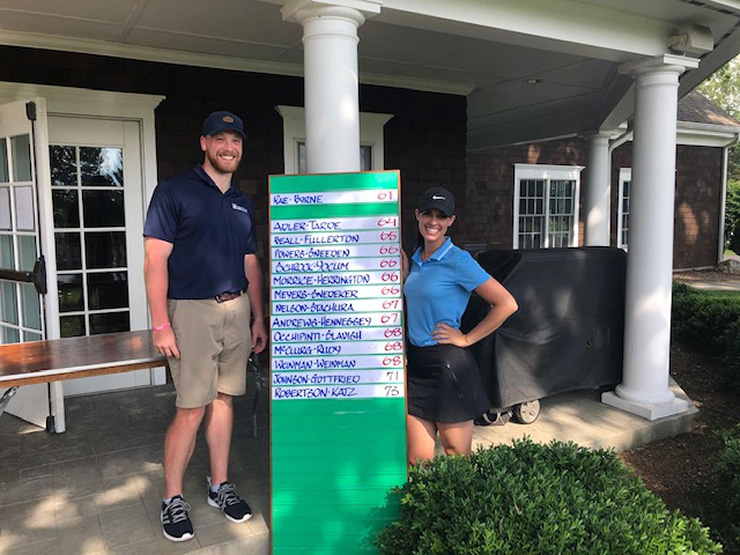 That being said, after winning by four, their handicaps are officially under investigation.

How many actual majors will Jon Rahm win in his career?
What country club(s) would I join if I won $1 million?
Would more on-course drinking improve my handicap?