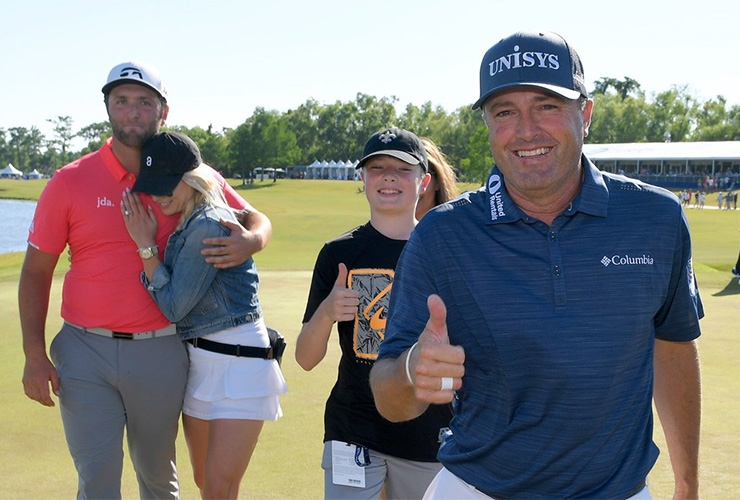 By Christopher Powers
Between the two of them, Jon Rahm and Ryan Palmer have five career victories on the PGA Tour, three for Palmer and two for Rahm. While the win count is similar, they couldn’t be at more different places in their career. Rahm, 24, has many more wins and years ahead of him, while Palmer, 42, had not won on tour since 2010. He knows better than anyone how hard victories are to come by.

That’s why Palmer was noticeably emotional following he and Rahm’s victory on Sunday at the Zurich Classic of New Orleans, where the pair combined for a final-round 69 in foursomes play to win by three strokes.

“Pretty special,” said a choked-up Palmer, whose wife and son rushed on the 72nd green to hug him. Palmer’s wife, Jennifer, just went through a cancer scare in 2018, right around the same time that Palmer had his own health issues. It was a long way back to the winner’s circle, and Palmer had a tough time putting it into words. Rahm tried to come up with a few for him as Palmer embraced his son.

“Nothing I can say right now is going to be better than that,” Rahm said. “It’s been a great week with him, he’s a great guy and I couldn’t be prouder. He played a lot of great golf today.”

For Rahm, it’s his third career tour victory, giving him one in each of his three full seasons. So far in 2018-’19, Rahm has made all 11 of his cuts, compiled seven top-10s and finished outside the top 25 only once.

Sergio Garcia and Tommy Fleetwood made a late run, but their Sunday 68 ultimately wasn’t enough. They finished in solo second, while the team of Kyoung-Hoon Lee and Matt Every and the team Brian Gay and Rory Sabbatini tied for third.

It's not only being outside and exercising that is good for us. It's how we learn to handle frustration, and even who we're with.