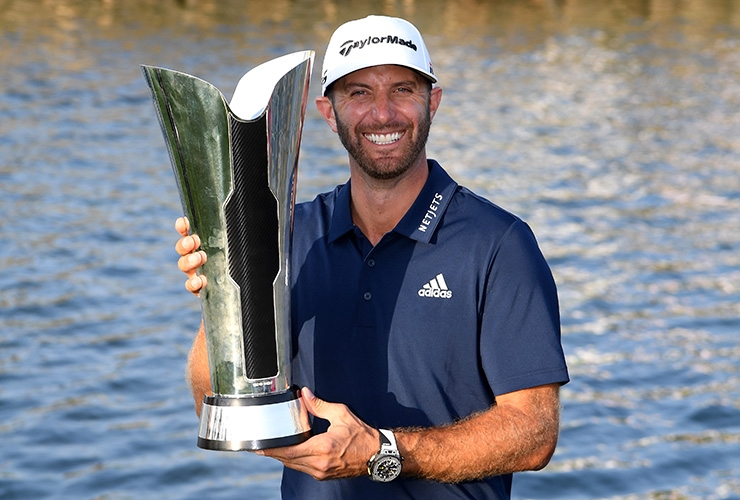 By Kent Gray
Tom Lewis owned the early magic to turn a two-horse race into a giddy three-way sprint before Haotong Li produced another piece of wedge wizardry to keep things interesting at the turn. Heck, even Dustin Johnson tried to get in Dustin Johnson’s way of winning the inaugural Saudi International late on Sunday at Royal Greens Golf & Country Club.

In the end, though, the world No.3 found a way to claim a 20th worldwide win, his sixth on the European Tour in 86 appearances but the first in a regular season start outside the co-sanctioned majors and World Golf Championships, the latter of which he owns five.

A closing 67 got the job done for the 2016 U.S. Open champion who finished on -19, two strokes clear of the gritty Li who earned some self-administered justice after that iffy 72nd hole rules infraction at the Omega Dubai Desert Classic last Sunday cost him a deserved share of third and the thick end of €100,000.

The sweet-swinging Lewis snared solo third on -15, a shot clear of rookie Australian professional Min Woo Lee who impressively negotiated his first weekend as a pro – after missing the cut in Abu Dhabi – with a pair of 63s. Lee started the week ranked No. 979 in the OWGR but seems he has no intention of letting sister Minjee Lee, the women’s world No.6, hog all the family limelight.

Sunday ultimately belonged to Johnson although this was no canter to a €508,260 payday that will see the 34-year-old American move to within a whisker of leapfrogging his good pal Brooks Koepka into second place in the Official World Golf Rankings (OWGR).

Starting tied at -16 with Li, it shaped as a two-man dogfight given Lewis was a distant, third five strokes back. It seems no one handed Lewis the final round script, however; the two-time defending Portugal Masters champion erased that deficit in a flurry of five successive birdies to open his final round. The 28-year-old Englishman was even briefly tied at the top with Johnson but could play the remaining 13 holes in just level par to sign for a closing 65.

Li was always going to struggle after his sensation 62 on Saturday, a round which included four eagles, the first three of them on par-4s which is a European Tour record.

The 23-year-old world No.44 led by one at the turn after chipping in from the rough above the 9th green but then handed the initiative back to Johnson by bogeying three of his next five holes.

Two ahead on the 16th tee and seemingly in control, Johnson gave Li renewed hope when he ditched his tee shot on the par-3 into the Red Sea seconds after the Chinese scrapper had knocked it to birdie range. But a gutsy third shot from a drop way back on one of the hole’s amateur tees set up a 10-footer that Johnson would will into the cup to escape with a championship defining bogey. By that stage, Li had already missed his birdie putt and what could have been a two-shot swing and another tie atop the leaderboard turned out to be a one-shot buffer for Johnson with two to play.

Li needed to repeat something akin to his sensational eagle-eagle signoff from Saturday but could manage only a par-birdie finish as Johnson closed birdie-birdie.

“It’s definitely very nice to get the first win of the year and especially first European Tour victory, very pleased to get it,” said Johnson who moves to solo fifth on the list of all-time American winners on the European Tour after Tiger Woods (40), Phil Mickelson (10), Jack Nicklaus (9) and Tom Watson (8).

“The bogey on 10 was bad, missed little a short putt, but the greens were so difficult to read. Every putt was difficult no matter how long it is

“The one [putt for bogey] on 16 was a big putt after I hit it in water which was just a terrible shot. I didn’t play my best today but found a way to get it done.”

With rounds of 68-61-65-67, including Friday’s nine-under course record, Johnson indeed found a way to win and in a deep field to boot, one containing four of the world’s top 5. Desert Swing champion Bryson DeChambeau was the best of the big name rest, the world No.5 closing with a 68 to finish T-6.

It must give you confidence heading into the majors, Dustin, especially as your conversion rate as a 54-hole leader on the European Tour had been one for six before today?

“I feel like my game, I’m in much better form than even last year…hitting a lot more quality shots. I felt a lot more in control of the golf ball in the wind, even [compared too the PGA Tour’s early events] in Hawaii, so I’m looking forward to the stretch coming up.”

“It was a very good match, especially on the front nine, playing really good,” Li said. “On the back nine, just a little bit off, and wasn’t my best over there today again. But I learned a lot and especially that last few holes was good for me. I think he deserved to win this event.”

Really pleased the way I played this week and 2nd spot. Congratulations @DJohnsonPGA on the ? Next event for me will be the @WGCMexico Thank you for all messages over the last seven days. ?? #TeamHL pic.twitter.com/O61Mb57GzV

Like Li, Lewis could only doff his cap to Johnson but drew satisfaction from producing a run of 13 birdies in 18 holes up to the 5th on Sunday.

“Yeah, I hit some really good shots and tap-ins a lot of the time. Unfortunately, I hit a poor shot into No. 6 and resulted in a bogey. I didn’t hole any putts coming in. The last three holes, I could have easily have holed, you know, up-and-down the last, and maybe done a bit better. But you know, I’m happy with the result this week,” Lewis said.

“It shows that I can go low over sort of the Friday, Saturday, Sunday period. Hopefully, if I can just start better, some tournaments, and then carry on doing what I’m doing when I do shoot 1-over, then maybe I’ll walk away with a trophy.”

Reed on his Saudi return: ‘If we can help inspire even a handful of people to take up the game, then it will be very rewarding’