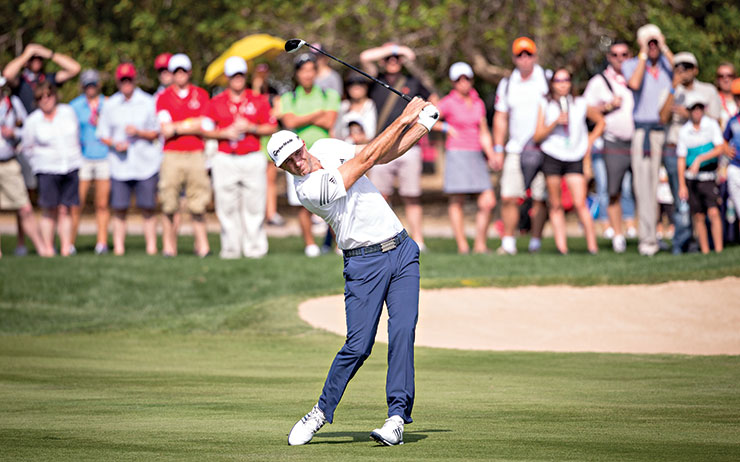 Stop. The. Press. Dustin Johnson, the big-bombing belittler of par 5s worldwide, hasn’t managed a single birdie in two loops of The National’s four longest holes. Watch out the weekend.

The great news is the world No.3 has made it that far in his Abu Dhabi HSBC Championship bow despite the statistical anomaly, a four-under 68 Friday seeing the U.S. Open champion squeeze above the cut line by two shots at -4.

The 32-year-old was joined on the 140 aggregate by defending champion Rickie Fowler who has carded matching if dissimilar rounds of 72-68 in the Desert Swing Opener.

Johnson was almost incredulous with his performance on the par 5s after his second round.

“I mean, still, after two days, the par 5s…I played eight of them at even par, no birdies,” said Johnson who was a combined 123 under on par 5s for 87 rounds on the PGA Tour last year. “Over the weekend, I really need to take advantage of the par 5s.”

Johnson at least has his trusty old putter working again after reverting back to the TaylorMade Itsy Bitsy Spider mallet he’d benched on Thursday. The mallet he wielded Friday has been in his bag since the BMW Championship in September, the PGA Tour’s penultimate FedEx Cup playoff where Johnson carded a course record 63 en-route to victory at Crooked Stick.

“Yeah, it didn’t go so well. Yesterday I putted really bad. It wasn’t a big deal that I put it back into play, and rolled it a little bit better today,” he said.

“Even par was about the worst I could have shot [Thursday], I didn’t make one putt. So I knew as long as I played halfway decent today, I was going to get right back in there.”

Also back in there, just, is Fowler who mixed five birdies with a bogey on 17 Friday.

“Obviously Martin [Kaymer] has had success here and he’s off to a good start. I’m going to have to get to at least the mid-to-high teens to have a chance. I’m going to need a good one [Saturday] just to put myself in a decent position.”