Jin Young Ko mishandles a five-stroke lead, will enter the final round one up on I.K. Kim 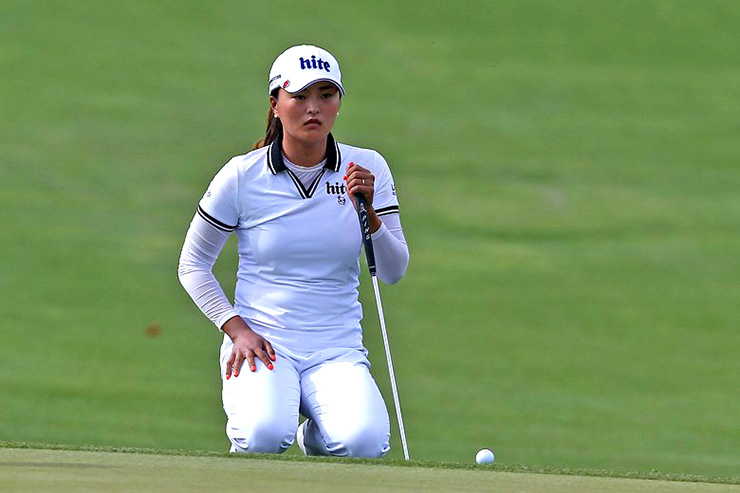 Jin Young Ko of South Korea, lining up a putt early in the third round of the ANA Inspiration, leads heading into the final round. (Photo by Matt Sullivan/Getty Images)

By John Strege
However one crunched the numbers at one point on Saturday, they invariably added to a Sunday victory for Jin Young Ko in the ANA Inspiration.

Take a lead of five with 26 holes left and factor in a final-round scoring average of 66.2 this year and go ahead and affix her name to the Walk of Champions adjacent to the 18th green of the Dinah Shore Tournament Course at Mission Hills Country Club.

Or not yet. Ko stumbled en route to her Sunday victory lap by making a double-bogey when she hit her tee shot into the water on 14, followed by a bogey on 15. She’ll take only a one-stroke lead over 36-hole leader I.K. Kim into the final round.

Still, she made up five strokes on Kim, who began the final round with a three-stroke lead, four ahead of Ko. A four-under par 68 from Ko still equalled the second-best score of the day (Alena Sharp had a 67). Kim had her own issues on the front nine, including a double-bogey on the par-5 ninth hole resulting in a five-stroke deficit heading to the back nine. But she played the final nine in two under and posted a one-over 73.

“It’s okay,” she said of the tee shot at 14. “I’m not a robot. I’m human. Don’t think about bad things. Just looking for good things. I had a great round still. Yeah, sometimes it happens on number 14 and 15 also, but I had birdie on 17. It was really pressure. Doesn’t matter. I’m not afraid of everything, so I’m just looking forward to Sunday.”

The numbers still are working in Ko’s favour, given her ownership of final rounds this season: 65, 65, 69, 68 and 64. Any of those numbers likely would assure a victory for the 23-year-old South Korean, who already has won three times in her short LPGA career.

Ko, fifth in the Rolex Rankings, has been on a remarkable roll. She has finished second, tied for 29th, tied for third, won the Founders Cup two weeks ago, and tied for second in the Kia Classic last week.

She is seeking to become the fourth Korean to win here, following So-Yeon Ryu in 2017, Inbee Park in 2013, Sun-Young Yoo in 2012, and Grace Park in 2004. But so is Kim, who also wants to settle a score with the tournament. Recall that in 2012, she missed a one-foot putt to win here and lost to Yoo in a playoff.

The two will be in the final pairing on Sunday. “We have a really great relationship,” Ko said. “She’s amazing. So I will really enjoy with I.K. tomorrow.”