Jim Nantz wasn’t where you thought he was for Tiger Woods’ winning putt, reveals how historic Masters moment went down 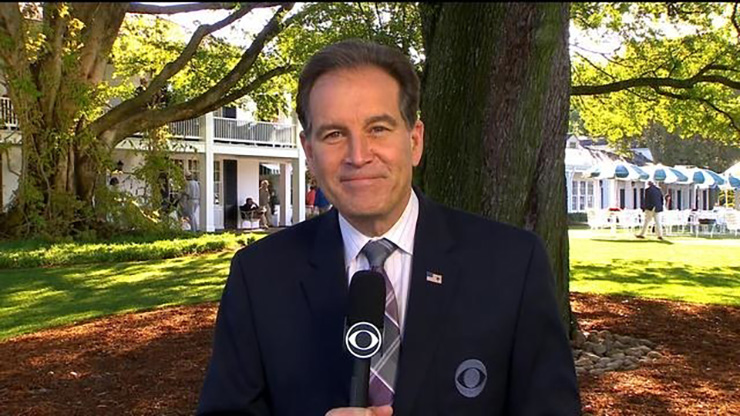 By Alex Myers
Jim Nantz has been widely praised for his handling of Tiger Woods’ win at the 2019 Masters, most notably for the two-and-a-half minutes he went without saying anything in the immediate aftermath while Woods celebrated a long-awaited 15th major title with his caddie, family, and other members of his inner circle. A week later, the CBS play-by-play man explained his strategy for calling such a historic event, but he also revealed a secret. Nantz wasn’t where golf fans thought he was for the big moment.

In an interview with Sports Business Journal’s John Ourand, Nantz said he was already in Butler Cabin for Tiger’s winning tap-in on the final hole. Meanwhile, booth partner Nick Faldo remained in the TV tower above the 18th green.

“After that putt dropped on 18, there wasn’t a chance in the world that I was going to say anything,” Nantz said. “Lance Barrow’s a great producer and we work together exceptionally well. He’s in the truck half a mile away. I’m in Butler Cabin already. And Nick [Faldo] is 300 yards away from me in the tower on the 18th green.”

Nantz said on a recent episode of the Golf Digest Podcast that former CBS boss Frank Chirkinian taught him early in his career to “use silence as a weapon.” He certainly wielded it in this case for the majority of an incredible four minutes of TV.

“As soon as the ball dropped, I said to Lance on the talk-back switch, ‘I’m not saying anything for a long time.’ Lance and I wanted to make sure since that none of us were together, the next time somebody spoke it was going to be me,” Nantz told Sports Business Journal. “We were going ride this thing out and sit back and enjoy it. I never would have jumped on a moment that was that big. It was just so big. There was nothing you could do to add to it. You could only ruin it.”

When Nantz, working his 34th Masters for CBS, did finally speak again, this was the back-and-forth with Faldo, which is even more impressive considering they weren’t sitting next to each other as originally thought:

NANTZ: “I never thought we’d see anything that could rival the hug with his father in 1997, but we just did.”

FALDO: “That will be the greatest scene in golf forever, Jim Nantz.”

NANTZ: “That hug with his children, if that doesn’t bring a tear to your eye if you’re a parent, you’re not human.”

Watch and listen to the four-minute clip below:

Nantz, of course, was in Butler Cabin for the green jacket presentation with Augusta National chairman Fred Ridley. However, there was more of a sense of urgency to the proceedings than usual with an approaching storm cell that had caused final-round tee times to be moved up by more than five hours. Nantz wound up conducting the brief ceremony before eventually doing a longer interview with Woods (and Faldo) more than an hour later when Woods returned to the building after his winning press conference in the media centre.

Since Woods’ fifth Masters win, Nantz has called it “the best event I’ve ever covered.” And given all the circumstances, one could argue it was also the legendary broadcaster’s best-ever call.