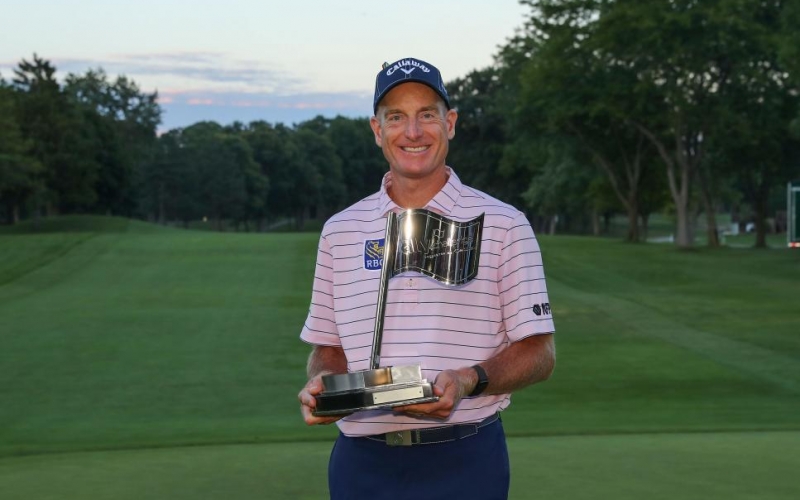 By John Strege
Jim Furyk needed no introduction, of course, but he emphatically made his presence known anyway by winning his PGA Tour Champions debut in the tour’s return from a five-month COVID-19 hiatus.

Nearly three months after turning 50, Furyk shot a four-under-par 68 at Warwick Hills C.C. in Grand Blanc, Mich., on Sunday to win the Ally Challenge by two. His 54-hole total of 14-under-par 202 was two better than another senior rookie, Brett Quigley, and Retief Goosen.

Furyk became the 19th player in tour history to win in his debut and the first since Miguel Angel Jimenez in 2014. He also became the third rookie to win in 2020, joining Quigley and Ernie Els, and forming a potentially dominant nucleus of newcomers to the senior circuit.

It was a surprise to no one that Furyk prevailed, principally because he remains competitive on the PGA Tour from which he likely has forged a World Golf Hall of Fame career. He came into the Ally Challenge 92nd in the World Ranking. The senior closest to him in the ranking was Els at 477th.

Furyk, who won 17 times on the PGA Tour, has made the cut in three of his last five PGA Tour starts, most recently at the Memorial, where he tied for 48th. He is only 16 months removed from finishing second in the Players Championship, and he is in the field at the PGA Championship at the TPC Harding Park in San Francisco this week.

He began play on Sunday in second place, trailing Quigley by a stroke, a deficit that grew to two on the front nine. But he pulled even on the 10th hole with a birdie to Quigley’s bogey.

Furyk and Quigley arrived at the 17th hole tied for the lead, but the latter bogeyed the final two holes by missing the greens in each instance. Furyk, meanwhile, missed only one of 18 greens in regulation and hit 13 of 14 fairways.

No doubt, his fellow senior competitors are wishing Fuyrk only the best of luck at the PGA at Harding Park. With a good finish, they can only hope, perhaps he won’t feel the need to come back and visit them any time soon.