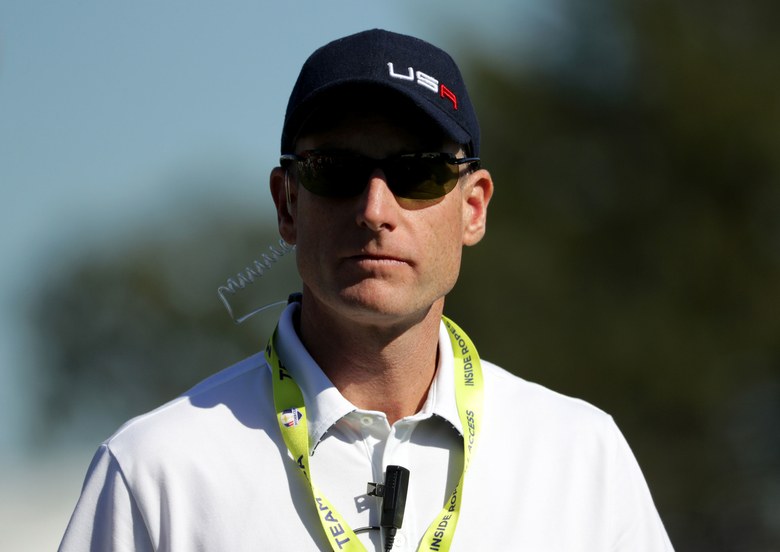 With nine Ryder Cups as a player on his resume, Jim Furyk will be the the most experienced captain in Ryder Cup history. Now the question remains: Will he be the first playing captain in more than half a century?

Furyk was asked just that on Wednesday after he was formally announced as U.S. captain for the 2018 Ryder Cup at PGA of America headquarters in Palm Beach Gardens, Fla. And after a long pause, this was his response:

“I don’t want to say no, but also, my main focus and what I’m really interested now, is being a captain,” said Furyk, who plans on playing a full schedule of 18-20 events this year.

In a Golf Channel interview following the press conference, Furyk added this:

“If this time next year, I’m in the talk, if I’m in the top eight (on the points list), then I think it’s time to have that discussion.” – new U.S. Ryder Cup captain Jim Furyk

Arnold Palmer was the last playing captain in 1963. Furyk, 46, is currently No. 37 in the Official World Golf Ranking.

The 2018 Ryder Cup will be played at Le Golf National just outside of Paris. It’s the first time France has hosted the event. Furyk will face a daunting task in leading Team USA to its first win on foreign soil in the event since 1993.

Last year, Furyk looked like he might play his way onto the team for a 10th time when he finished runner-up at the U.S. Open in June and then became the first player to shoot 58 on the PGA Tour in August. He wound up not being one of Davis Love III’s captain’s picks, but was a vice captain as the U.S. defeated Europe 17-11 to end an eight-year drought in the biennial event.

“It’s no secret this has been the favorite event of my career,” said Furyk, who owns a 10-20-4 career Ryder Cup record as a player. “I get chills just thinking about all the events I’ve been fortunate enough to play in. . . . I look forward so much to the next two years.”

Furyk’s first order of business on Wednesday? Naming Davis Love III, who led the U.S. to that win at Hazeltine, a vice captain.

And regardless of whether or not his Ryder Cup playing career is over, Furyk thinks it’s a plus that his PGA Tour career is still thriving.

“I wanted to be relevant on the PGA Tour,” Furyk said about the timing of being named captain. “I wanted to know the guys and know the young players well.” – Alex Myers is an associate editor at Golf Digest and the author of The Grind