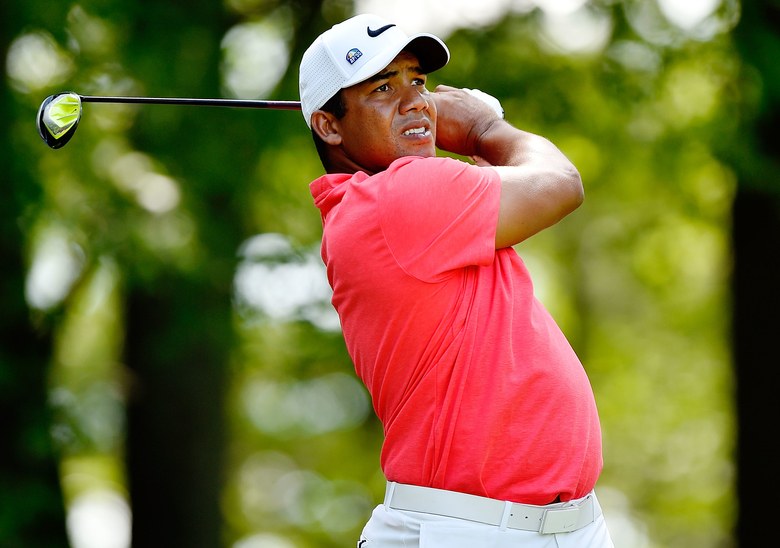 Jhonattan Vegas woke up Sunday morning and checked Twitter, much the way many of his fellow tour pros do. Only he wasn’t looking for the latest sports scores, a funny video or some other 140-character banter.

Venezuela—where Vegas was born, learned the game using a stick and a rock and still has many family members and friends—has been engulfed in deadly violence with protests over the election of a controversial new constitutional assembly led by the country’s President, Nicolas Maduro, who the opposition has said would turn the nation into a dictatorship.

“It’s always on my mind,” said Vegas, who was searching for an update on the latest news back home. “It hurts a lot, seeing the country the way it is, seeing a government that treats people that way when they don’t deserve it, just to remain in power, and all the suffering that even my family and friends that are having right now. It’s just not fair.”

Never mind that Vegas had to try to win a golf tournament with such heavy thoughts on his mind. He did anyway, closing with a seven-under 65 to finish regulation tied with Charley Hoffman before making a birdie on the first hole of a sudden-death playoff at Glen Abbey outside of Toronto to win the RBC Canadian Open for a second straight year.

Never mind, too, that Vegas had missed the cut in each of his last five starts and seven of his last nine coming into the week.

“I’ve had a horrible summer to put it the best way,” Vegas said. “But it’s golf, and you have to keep a positive mentality and always think that you’re going to play your best.”

He certainly did that on Sunday.

Vegas birdied four of his last five holes on the front nine to make the turn in 30, punctuated by a 40-foot bomb on the par-4 ninth to tie for the lead.

He added three more birdies and made just one bogey on the back, but after failing to birdie the par-5 18th he had to wait out his fate with Hoffman a stroke back and playing behind him.

Hoffman reached the finishing hole in two but narrowly missed his eagle putt before tapping in for birdie to cap a 68 and finish regulation at 21-under 267 with Vegas.

Playing the same hole a few minutes later, Vegas’ approach from the left fairway bunker hit the grass just above the lip but the shot had enough oomph to clear the water and go through the green.

“When I heard the clip, because obviously I didn’t see it, I knew that it was probably going to go in the water, because I didn’t know exactly how hard it hit [the lip],” Vegas said. “But then when I saw the ball in the air, it was still going really hard and forward.”

Vegas chipped to within a foot and when Hoffman’s birdie attempt from the greenside bunker rolled past the hole the 32-year-old Venezuelan had his third career victory.

“It’s been a special day,” Vegas said. “I just came out with an aggressive mentality, just feeling really good about my game. When I started making a few birdies, especially the putt for birdie on 7, I started feeling the same chills that I felt last year when I won, and I just knew that something good could happen if I kept that going.”

For Hoffman, meanwhile, it was another case of close but not enough.

For the third time in his last five starts the 40-year-old who lives in Las Vegas had a chance to win but didn’t.

“I gave myself a chance,” Hoffman said. “Except I putted horribly today and left everything short. Jhonny played great today. All credit to him. [I] didn’t make that many putts of any significance at all on the back nine unfortunately. … Just didn’t get the putts to the hole, which is probably going to be what I’m probably going to lose a little sleep over.”

Despite finishing a stroke out of the playoff, Ian Poulter had plenty to be pleased about. He shot 64, the best round of the day, and has turned his season around after facing the possibility of being without a PGA Tour card at the end of the year.

“I played good golf today,” he said. “The confidence tin was empty a few months ago … Life’s all good.”

It is for Vegas, too, after a rough two months. Still, his mind was elsewhere Sunday night as he held the trophy.

“It makes me a little bit angry obviously,” he said of the unrest in Venezuela. “But it’s something that obviously I use as motivation to raise a voice against the government that we’re having right now. Obviously by me winning and the exposure of me getting here can inspire other people in my country to revolt against the government. Obviously we need a change, and you know, hopefully by making this a little more public, we can get something positive going for the country.”