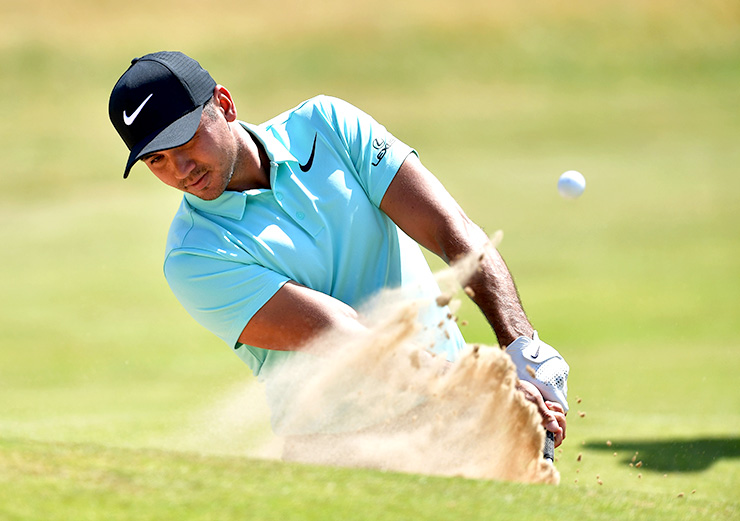 Asked to sum up his form leading into the 146th Open Championship at Royal Birkdale, Jason Day politely deflected. It spoke volumes.

“It wouldn’t be any words I’d use in here,” the former world No.1 retorted in the massive media marquee beyond the grandstands that tower above the Southport links’ 18th green.

It was also the only time the Australian was economic with his answers during a wide-ranging and often emotional interview that offered an intriguing insight into a player clearly struggling to regain his mojo. Donald Trump even rated a mention or three after Day delayed his arrival to Birkdale till Sunday to avoid running into the U.S. President’s travelling circus at JKF International following his visit to the U.S. Women’s Open, but enough of the Golfer-in-Chief already.

Day’s year has been an emotional rollercoaster after his mother was diagnosed with lung cancer, forcing the 29-year-old to tearfully abandon his defence of his WGC-Dell Match Play title in March.

He’s understandably struggled ever since, save for a runner-up finish at the Byron Nelson in May, one of just two top-10s in 13 starts. However, four missed cuts in 2017, including unwanted weekend’s off at the U.S. Open and Travelers Championship leading into this week, has seen Day slide to 6 in the rankings.

Golf in Dubai chairman Peter Dawson, this time in his guise as chairman of the Official World Golf Ranking board, presented the Aussie with the Mark McCormack Award at the conclusion of his press conference. It recognised Day’s 41 weeks at No.1 in 2016 but also served to emphasise Day’s dip after his five wins in 2015, the PGA Championship at Whistling Straits amongst them, and three last year.

So lets start at the start, where’s it’s all gone wrong?

“Okay. If you take my years 2015 and 2016, I hit it long and straight, straightish. I hit my iron shots a lot closer and I holed everything on the greens. And this year it’s not as long, it’s not as straight. My iron shots aren’t as close, and I’m not holing as many putts. So it’s a perfect formula for not having a good year.”

It runs deeper than that of course. Add in a back injury, his open admission of burnout at the end of 2016 and the “difficult” pressures of being No.1 to the almighty scare with his mother, and you get a sharper picture of his struggles.

“But I have to understand sometimes I’ve got to give myself a little bit of leeway, know that golf is a marathon, and hopefully at the end of my career I’m in somewhere way at the top, somewhere I’ve never even thought I would be.

“I’ve just got to be patient and just let things happen. Because I honestly believe good and big things are coming for me. I’ve got to just trust it and understand, keep working hard.”

Day’s conference ducked and weaved thereafter with insight into a recent text message from Tiger Woods offering putting advice, his thoughts on the pivotal, brutal par 4 6th hole at Birkdale and revelations his caddy had unwittingly led the R&A to turn the 10th fairway into an out of bounds for players taking a shortcut off the 9th in practice.

He was unrepentant when the questioning moved to his laborious pre-shot routine: “I think at the end of my career no one is going to go, he was a great golfer, but he was slow. To be honest, I don’t really care what people say. I need to do what I need to do to win a golf tournament. And within reason of respecting other players and the Rules of Golf. “

But his voice wavered when conversation returned to his mother Dening, who was initially told by doctors in Australia that she only had 12 months to live. Thankfully, her prognosis has improved since she joined her son in the United States for treatment.

“When you feel like you’re going to lose someone that are very close to you, there’s nothing you want to do more than just be with them and you don’t even want to think about playing golf or even think about working,” Day said.

“And obviously the time that I would be spending working and practicing, it caught up to me as I hadn’t been playing as great as golf as I should have, but within reason. I needed to take that time off because I thought I was losing my mom, and didn’t think she was going to be around anymore. Up to that time I’d only see her once every year and that was nowhere enough time to spend with your mom.

“Everything seems like it’s kind of coming back into balance for me. And I’m able to focus on just really getting after it and working hard and trying to really pinpoint what has been going wrong in my game, which is I alluded to earlier, driving, kind of the shorter irons, wedges and putting. And if I can really hit those, hopefully I’ll get back to the winning form and get back to No. 1. That would be the ultimate goal.”

Day’s best Open finish was his tie for fourth at St Andrews in 2015. He was T22 at Troon last year but given his 2017 struggles, does he see any chance of reigniting his legacy at Royal Birkdale?

“You always have to believe in yourself [but] it’s easier said than done. You can say that you want to win, but if you don’t truly believe in it, it’s not really going to happen.

“So I’m trying to not give myself too many expectations with regards to I’m coming in here, I’m coming in here and going to beat everyone else, and that’s it. I’ve got to understand the form hasn’t been great. I’ve got to just try and start with tomorrow’s first ball and just somehow find it on Sunday and hopefully I’m there in contention on Sunday.”