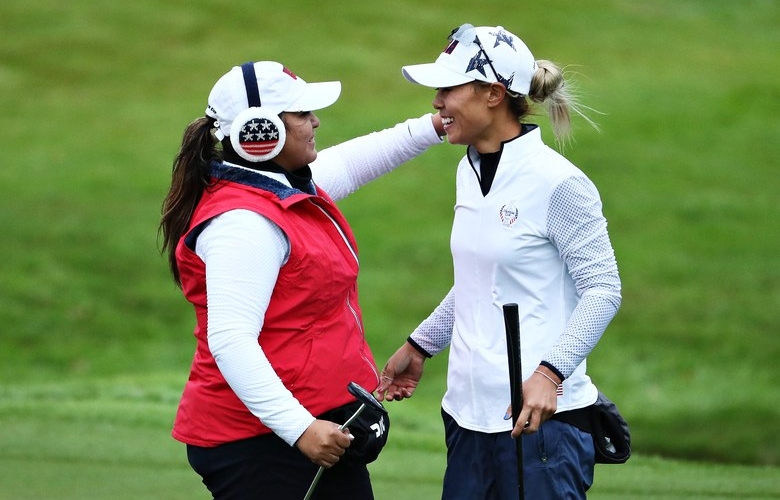 AUCHTERARDER, SCOTLAND – SEPTEMBER 14: Danielle Kang and Lizette Salas of Team USA celebrate winning their match on the seventeenth hole during Day 2 of the Solheim Cup at Gleneagles on September 14, 2019, in Auchterarder, Scotland. (Photo by Jamie Squire/Getty Images)

By John Huggan
GLENEAGLES, Scotland — Way too savvy and experienced an operator to publicly verbalise such a notion, U.S. Solheim Cup captain Juli Inkster clicked smoothly into diplomatic mode. A third straight Solheim Cup victory over the Europeans looks to be inevitable, you say? Of course not. Not with 12 singles matches to play and six points required for the American side to retain the trophy. Half a point more would mean a first-ever win for the visitors in Scotland.

But the look of quiet satisfaction on Inkster’s face at the conclusion of an endlessly windswept and occasionally wet Saturday at Gleneagles betrayed her. Armed with the deeper and higher-ranked of the two teams, and with the match now tied at 8-8, the seven-time major champion will surely feel—deep-down, at least—that her players are favourites to triumph for an 11th time in a biennial contest that began in 1990.

History is heavily on Inkster’s side. Traditionally dominant when playing without the benefit of a partner, the New World has “lost” the singles only five times in 15 previous Solheims. And only once—at Killeen Castle in Ireland eight years ago—have the Europeans claimed the cup after entering the third and final day’s play tied on the scoreboard.

“We’re ecstatic where we are because I think we’re pretty good in singles,” said Inkster, who somewhat controversially left out the unbeaten Korda sisters, Nelly and Jessica, from Saturday’s four-balls. “Hopefully the weather will be a little better tomorrow and we can see some really good golf from both sides. We will battle for the cup. That’s what we do.

“As for the Kordas, I just think they played twice yesterday and once today in some really tough weather. I’m going to need them in my singles matches. Those points are very valuable. And they need some rest.”

Good point. Events so far this week would suggest that the eventual destination of the spoils is far from certain. As the overall score would suggest, this has been a hugely competitive contest. And a closer look only confirms that fact. Of the 16 matches so far concluded, only six have failed to reach at least the penultimate green.

“There’s not much to pick between them teams,” said European captain Catriona Matthew. “They’re pretty fairly balanced. I’d rather be ahead than behind. But tied is good. We’re really pretty pleased. Tomorrow is just going to come down to probably the odd shot, the odd putt. It’s going to be pretty tight again, just like the first two days. It will be a small thing that will change the direction of the momentum one way or the other.”

All of which has taken some time, as well as, no doubt, a great deal of energy. By way of seemingly endless example, the second Saturday four-ball—an eventual halved match—between the European pair of Jodi Ewart Shadoff and Caroline Masson and Americans Lexi Thompson and Marina Alex took exactly six hours to complete.

There were, of course, plenty of excuses for the pace of play, most of them weather-related, although “we’re playing for our country” made an appearance, too.

“We were aware of how slow it is because we were on the clock and warned,” Thompson said. “But it’s tough to hear because the course was playing so difficult. We’re playing as fast as we can. We don’t want to be out there for six hours. But we have a lot on the line, and we want to hit the best shot that we possibly can.”

Indeed, conditions Saturday were variously described as “brutal,” “a grind” and “the toughest I’ve ever played in.” Which came as no surprise, the identities of participants on both sides at times barely discernible under their many layers of clothing. Lizette Salas was perhaps the only player to stand out. She was the one wearing earmuffs.

Then again, there will be those who will criticize the players, citing the wider damage done to the psyches of impressionable youngsters who will think that this is how golf is supposed to be played. An example: Watching on television at home, former European Tour player Raymond Russell’s young son, Leo, asked his father, “Has the screen frozen?”

Across the continental aisle, Matthew professed to be happier with 8-8 than she had been with the one-point lead her side had created Friday. Which was fair. Unlike the opening day when the visiting players finished stronger, 24 hours later the Euros did not lose any of the matches to finish on the 18th green. Where there had been weakness, there was strength.

Perhaps curiously, Matthew, like Inkster, did not see the extreme conditions as an advantage for the home side. Inkster pointed out how many of the “home” team actually live in Florida and Arizona and so are unfamiliar with cold and wet and windy. Or at least had only vague memories of such meteorological horrors.

“Maybe they grew up in this weather, but they’ve played over in the States for a long time,” she said. “This isn’t weather you’re going to go out and practice in. That doesn’t happen.”

No, it does not. In fact, this was the sort of day Scottish people make jokes about, the sort of day when they sit comfortably in the warmth of the clubhouse, shaking their heads at the “daft” visiting Americans out there, struggling in the wind and rain.

With the forecast for improved conditions Sunday, any frivolity will be replaced by a renewed ability to make birdies rather than slogging away for pars. The competition—intense enough so far—will be the better for that. Both captains seem to have followed similar philosophies when it came to their singles orders. Both have sprinkled their (on paper) strengths throughout, rather than going top or bottom-heavy. But there is one significant difference. Though Inkster’s magic number is 14—thus retaining the trophy for the U.S.—Matthew’s team needs to get to 14½ to regain possession.

The United States will be favoured by most informed observers. They nearly always are. But you never know. And Matthew was certainly talking a good game.

“We’re going in with a lot of confidence that we can do it tomorrow,” said the 2009 Women’s British Open champion. “I don’t really see many weak players on our team.”

Maybe Inkster does. But we’ll never know. She’s way too clever to let that sort of information slip.