‘It sucks:’ How Collin Morikawa’s fairy-tale start to 2023 turned into a nightmare 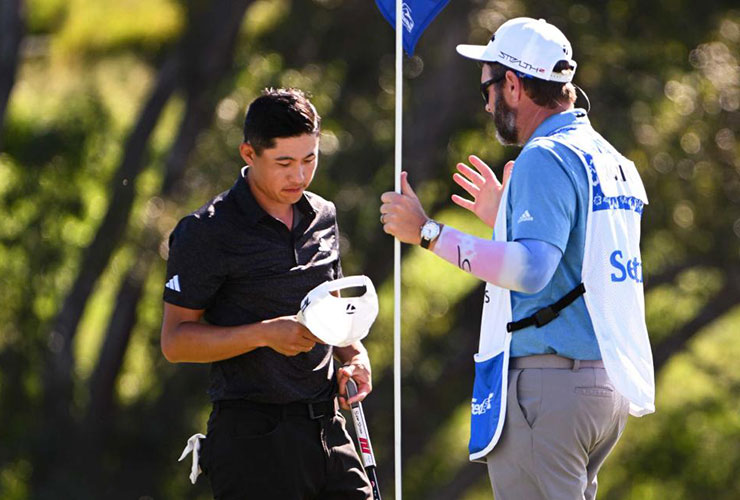 For three days at the Sentry Tournament of Champions, Collin Morikawa was composing a veritable symphony. It was a thing of beauty. Pitch perfect. Something that inspired awe in peers and spectators alike.

“He was bogey-free [for the tournament] until, what, until 14? Which is insane,” Jon Rahm said.

It was expected that the two-time major winner would end it with a magnificent crescendo. Instead, Morikawa produced a finish that was as jarring and discordant as fingernails across a chalkboard.

After an impeccable performance that enabled him to build a six-stroke lead through 54 holes, Morikawa couldn’t quite summon the same level of execution on Sunday. That opened the door for a charging Rahm to gallop past him for a stunning two-stroke victory at Kapalua Resort.

Stymied by one shot a year ago in an epic shoot-out with Cameron Smith despite blistering the Plantation Course for a 33-under 259, Rahm this time found enough strokes to get the job done, shooting a closing 10-under 63 for a 27-under 265 total and completing a comeback from nine shots behind with 17 holes to play. Of course, assistance from the front-runner was required, and Morikawa obliged with a trio of back-nine bogeys that left him with a one-under 72 — the second worst score on a brilliant day of sunshine and soft breezes.

“Had the same guy, the same Collin that we had the first three days, shown up, he would have been 30-something under. There’s very little we would have been able to do,” Rahm, 28, said after winning for the third time in his last four starts worldwide and collecting $2.7 million as the champion of the PGA Tour’s first ‘elevated’ event.

“You need a combination of both: me having a really good day, which I did, and Collin not having his best. It kind of happened to where it overlapped a little bit where I started really kicking in my next gear and he made a few bogeys. I’m lucky the golf gods were on my side in that sense.”

The heartbreaking setback was the second that Morikawa has endured in the last 13 months. At the 2021 Hero World Challenge, poised to become No. 1 in the world for the first time, the California native coughed up a five-stroke lead by stumbling to a four-over 76 while Viktor Hovland was 10 strokes better.

A different outcome was expected this time because this looked like a different Morikawa, one even more in command of his game and better equipped thanks to improvements to his short game and putting. Instead, he became the ninth player in PGA Tour history to surrender a six-shot lead.

“Sadness. I don’t know. It sucks,” said Morikawa, 25, rummaging through his emotions after being denied his sixth tour title and first since the 2021 Open Championship. “You work so hard, and you give yourself these opportunities and just bad timing on bad shots and kind of added up really quickly.”

Morikawa began the day six ahead of Scottie Scheffler, Matt Fitzpatrick and JJ Spaun, while Rahm was seven behind, and after a bogey at the first and a Morikawa birdie, the beefy Spaniard was nine back and not in the picture. And despite birdies on four of the next five holes, he had made up no ground by time he reached the par-5 ninth.

The complexion of the tournament changed when Rahm reeled off three birdies in a row starting at the short par-4 12th to climb within three strokes. And in the span of about three minutes, he was tied when he holed a 12-footer for eagle at the par-5 15th while Morikawa suffered his first bogey when he thinned a wedge out of a fairway bunker over the green at 14 and missed a 10-foot par attempt.

Once leading by 7, Collin Morikawa is now tied for the lead.

His first bogey of the week results in a co-lead with Jon Rahm. pic.twitter.com/PRiFBqvfGr

That’s when he felt pressure for the first time all day. “Once I made the bogey on 14 and they were walking off 15,” Morikawa said. “And didn’t see the leaderboard until I got on the green and you realise I’m putting for par to stay tied for the lead. At that point it’s a little different feeling than what you had early on.”

Morikawa was putting for par on the 15th hole because he pushed a 5-wood slightly and saw the ball roll off the steep slope some 30 feet below. Then he chunked his first chip. Things were slipping away, and they slipped farther away when he spun his approach off the green at the following hole for a third straight bogey. When Rahm sank a four-footer on 18 to go three ahead, it was over.

“It’s hard to look at the positives. It really is,” said Morikawa, who will take a few days off and then prepare for his next start at the Farmers Insurance Open near San Diego in three weeks.

Like Rahm, Morikawa knew he had lost the tournament as much as Rahm had gone out and won it. “A little bit of both. I mean one under on this course is not a good score. It really isn’t,” he admitted. “He still shot 63. But I still had it within reach. If I don’t make those bogeys and I make par, we’re right there. So he definitely made the birdies when he needed to. But I also made bogeys. When you’re getting bogeys at that time of the tournament, they’re costly. I definitely felt the weight of that.” 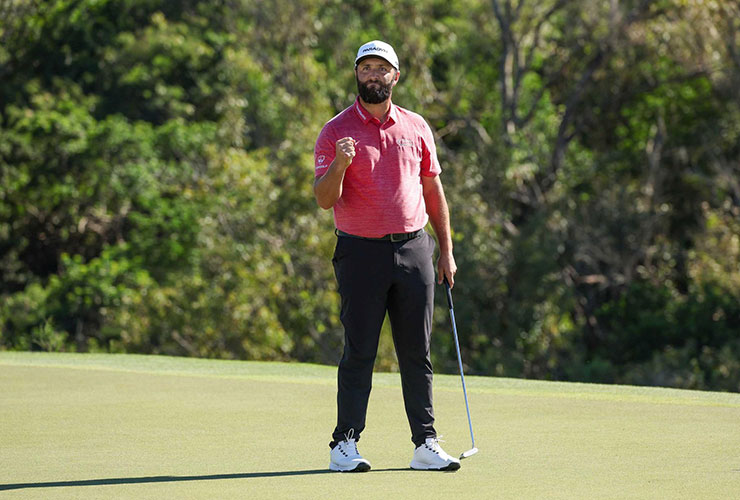 It was obvious he felt the weight of the loss, too. He kissed his new bride Katherine lightly on the cheek after emerging from the scoring room and accepted a hug from Rahm by the first tee. He answered questions dutifully afterwards and wore a tight smile recounting the day. There were a lot of positives to the week, but not the one he sought so desperately. He wanted to win. He didn’t want another lesson.

“My game hasn’t felt like that in a very long time. We saw, I saw little specs of it throughout kind of the fall season and was never able to put four rounds together,” he said “We’re still getting there, but for me I know there’s still a lot of work to do. Obviously it shows today, but I’m willing to put in that work. I think at this point now it’s just kind of going to hopefully just push me more and more to really figure out what it’s going to take for 72 holes.

“Don’t know what I’m going to learn from this week,” Morikawa added in the final analysis. “It just didn’t seem like it was that far off. It really wasn’t. Yeah, it sucks.”