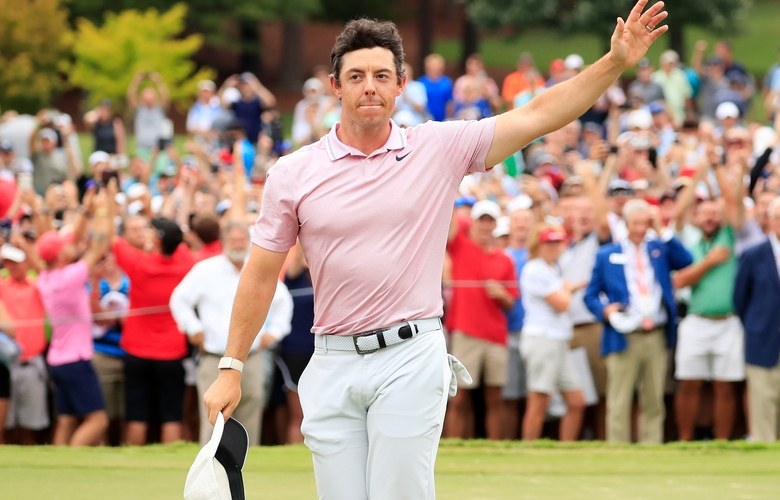 
By Joel Beall
In a shocking development, Rory McIlroy was named the PGA Tour Player of the Year overnight. McIlroy, 30, captured the honour over Brooks Koepka, Xander Schauffele and Matt Kuchar.

The award, which is voted on by PGA Tour members who played in at least 15 FedEx Cup events during the 2018-’19 season, apparently favoured McIlroy’s consistency over Koepka’s performance on the premier stages.

“I’m very humbled and very honoured,” McIlroy said. “It validates some of the decisions I made to start the year, and I couldn’t be more proud.”

McIlroy racked up a tour-best 14 top-10s in 19 events, highlighted by wins at the RBC Canadian Open, Tour Championship and the tour’s flagship event, the Players Championship. McIlroy also won the Byron Nelson Award for adjusted scoring average (69.057) for the third time in his career, and his 2.551 strokes gained were the best non-Tiger Woods figure in the statistic’s history. This is McIlroy’s third Player of the Year award, and his first since 2014.

“On behalf of the PGA Tour, my congratulations to Rory McIlroy on being voted the 2019 PGA Tour Player of the Year by the tour’s membership,” said PGA Tour commissioner Jay Monahan. “Rory’s season was a model of consistency punctuated by milestone victories and ultimately the FedEx Cup in Atlanta.”

Despite McIlroy’s strong output throughout the year, Koepka—who was named the PGA of America Player of the Year weeks ago—was thought by most to be the clear front-runner to win the award. That included McIlroy. After defeating Koepka at the 30-player Tour Championship for the FedEx Cup, the Ulsterman acknowledged that Koepka was the likely Player of the Year.

“He’s had a great season. He’s won another major, he’s won three times. And I know it’s going to sting because he most likely will win the Player of the Year, but he didn’t win the FedEx Cup,” McIlroy said following his victory in East Lake. “So I know it’s going to sting him for a bit, but I just wanted to tell him he’s playing so good. He’s the No. 1 player in the world, and he’s had a great season, and he said something similar to me, just happy for me.”

Koepka added his fourth major victory at the PGA Championship in May, building a seven-shot lead to hold off a surging Dustin Johnson at Bethpage Black. Koepka became the first player to defend both the PGA and the U.S. Open in a career, and joined Woods, Bobby Jones and Walter Hagen as the other players to defend two different majors. The win moved Koepka to No. 1 in the World Ranking, a spot that he continues to hold.

Koepka added runner-up finishes at the Masters and U.S. Open, along with a T-4 at the Open Championship, joining Woods, Jack Nicklaus, and Jordan Spieth as the only players to finish top four or better at every major in a calendar year. For his part, McIlroy had two top-10s at the majors and missed the cut at the Open Championship.

But Brooks’ season was more than the marquee events. Koepka notched wins at the WGC-FedEx St. Jude Invitational and C.J. Cup, and posted nine top-10s in 2019. Koepka led the tour in official money and was fourth in scoring. He won the inaugural Wyndham Rewards, which acknowledges the tour’s regular-season FedEx Cup points leader. He finished in a tie for third in the season-ending FedEx Cup/Tour Championship.

“Look, Brooks has had an incredible year,” McIlroy said. “This speaks volumes to what PGA Tour players think is important. I’ve harped on this: Players think more than just four weeks are important.”

This is the first time in 28 years the PGA Tour and PGA of America Player of the Year awards haven’t gone to the same golfer, and just third time overall. In 1991, Corey Pavin and Fred Couples shared the honours, with Nick Faldo and Wayne Levi doing the same in 1990.