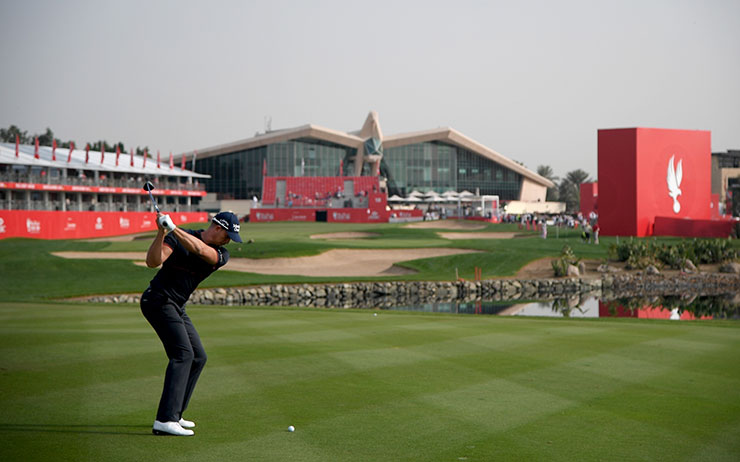 Henrik Stenson has the ‘Desert Slam’ back in his crosshairs after a sizzling opening 64 set the 12th Abu Dhabi HSBC Championship alight.

The 40-year-old Swede carried on from where he left off last season with a faultless eight-birdie circuit of The National Thursday. He lead by two overnight from German Maritn Kaymer, Englishman Oliver Fisher, Scot Marc Warren and Thai Aphibarnrat with another five players a shot further back.

Defending champion Rickie Fowler has ground to make up after carding an opening 72 while U.S Open Champion Dustin Johnson also starts the second round at even par. Only 32 players failed to match par as the field took advantage of a breathless day and Abu Dhabi Golf Club’s immaculate greens.

After capturing the 2006 Qatar Masters and the Omega Dubai Desert Classic the following year, Stenson admits the prospect of sealing the Desert Slam will spur him on over the next 54 holes.

“This is the first one [tournament of the year] so I didn’t come in here expecting too much given the light buildup I had, but with this start, of course, I hope I can keep it going throughout the week,” said Stenson who is off the first with American drawcard Johnson and Masters champion Danny Willett (+2) in the second round at 12.05pm Friday.

Stenson rolled in a birdie putt from eight feet on the par 5 10th to get his championship off to a fast start and went out in just 30 strokes, highlighted by a chip-in from 40 yards off the 14th green. Six stress-less pars followed before he birdied the par 3 7th from three feet and rolled in a four-footer on the 9th to sign for the 64.

The Open champion’s chip-in was the shot of the day but only just after DP World Tour Championship winner Matthew Fitzpatrick watched as his tee shot on the 7th cruelly lip out en-route to a 69.

“I don’t think I played as well as I scored potentially but the putter was working. I kept it tidy. Chipped in once when I missed the green and a couple up-and downs, and so not too much stress…a very good start to the year,” Stenson said.

The Iceman joked that a lack of practice might start to become his permanent pre-season routine after he flirted with The National course record he set in 2006, a 62 en-route to second place in the inaugural tournament. It’s the closest he has come to claiming the Falcon Trophy in what is now his 12th attempt.

“I didn’t do much practice before I left but the practice I did do was pretty good. I was quite amazed how good the game felt coming into today,” he said.

“So I didn’t put myself in too much trouble and yeah, 64, it’s the second best score I’ve had here in Abu Dhabi. I’m delighted with that score.”

Stenson will also tee it up in the Desert Classic and beyond that the majors are an obvious target.

“I just want to keep on developing my game. Keep on working hard on that, and come into the majors well prepared and well rested and try and put myself in contention. I feel like I can get the Claret Jug some company if I do that. I’m going to try my hardest.”

On the evidence of Thursday, the field in Abu Dhabi are going to have to work overtime to prevent Stenson getting his hands on a very big early-season bonus.