Hull keeps her eyes on the prize 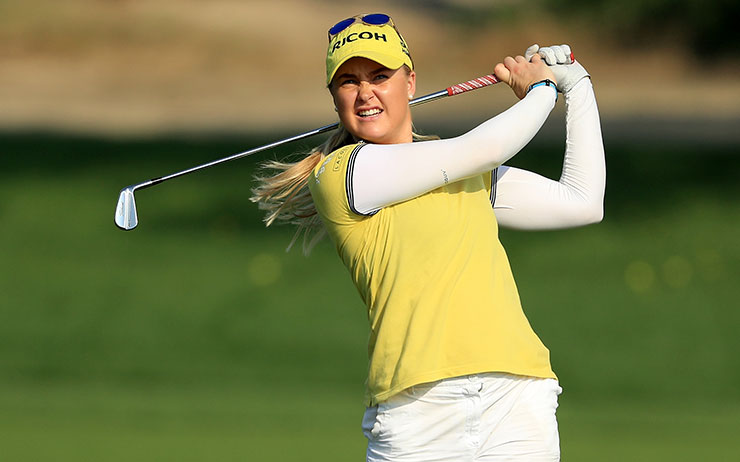 Charley Hull expects her name to feature prominently on the leaderboards dotted around Emirates Golf Club during this week’s 11th Omega Dubai Ladies Masters but won’t dare a peek at any of them until the Ladies European Tour season-ender is over.

The 20-year-old Englishwoman cashed in on a tip from Chinese star Shanshan Feng en-route to her breakthrough LPGA Tour win at last month’s CME Group Tour Championship in Florida.

“I actually learned something off Shanshan a few weeks back, because when she won, I think it was in Japan, she said that she doesn’t look at score boards on the way around. So I didn’t look at the score boards last week when I won in America. Hopefully I can do it again this week,” Hull said.

Given Feng ‘s record in Dubai, it’s sage advice to follow but Hull is one of the form players set to push the three-time defending champion all the way to the climax of Saturday’s final round.

Hull’s has pedigree of her own on the Majlis layout having captured LET Rookie-of-the-Year honours and the order-of-merit title in 2013 and 2014 respectively.

Her two-shot victory over Korean So Yeon Ryn in Florida saw her bank $500,000 and the priceless confidence she can complete a rare-hat-tick of titles in Dubai.

“ I felt like I was playing well leading up to [the CME Group Tour Championship] and to get the win feels really good and I feel dead confident,” Hull said.

“But at the end of the day, I kind of didn’t think about it for too long after, because I didn’t want to be on a high for too long. I was literally on a high for just the flight back and then kind of was like, okay, need to get back to work.”

“I feel pretty good with my golf game at the moment. So I will hopefully try to look for a win here because I’ve never actually won the tournament here. It would be pretty cool to finish the season on a high.”

Beyond that, the young superstar’s ambitions are boundless.

“There’s majors and I want to win more tournaments and you want to become world No. 1 and there’s the Olympics, so you’ve got loads of things. They [the LET rookie and order of merit titles] are just like the starting points. There’s so much out there to look forward to that I want to win.”