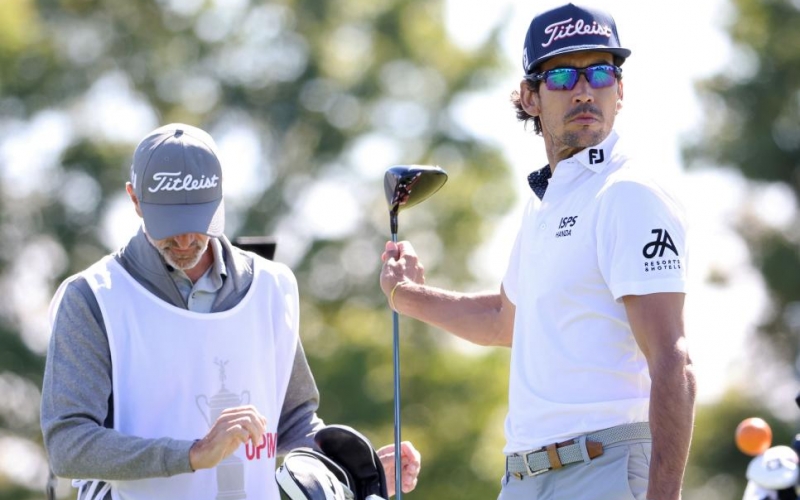 Jamie Squire
Rafa Cabrera Bello plays his shot from the second tee with caddie Colin Byrne during the third round of the 120th U.S. Open.

By E. Michael Johnson
Rafa Cabrera Bello is playing well at the U.S. Open, coming into the third round just two strokes off Patrick Reed’s lead, and is doing so by employing something you might find an everyday golfer try for his coming round on the weekend: changing up nearly every club in his bag.

According to Titleist, Cabrera Bello’s equipment company, a good part of the 36-year-old Spaniard’s early week prep centred on dialing in new shafts in his metalwoods, irons, and wedges, the work eventually leading to a change of driver head as well into the company’s new TSi3 driver.

Although highly unusual, the wholesale changes are an example of the benefits of communication between a player, his coach and equipment team along with that of fitting.

A Monday range session led to a discussion between swing coach Sean Hogan and Titleist tour rep Jim Curran about the shafts in Cabrera Bello’s irons—a split set of Titleist U500 utility irons (3-4) and 620 MB muscle-back blades (5- through 9-iron). The shafts were True Temper Project X LZ 7.0—a very stiff shaft that promotes a fairly penetrating flight but it was agreed to try the irons with the slightly more flexible LZ 6.5.

A range session on Tuesday revealed better yardages and enhanced consistency, leading Cabrera Bello to also try the same shafts in his Titleist Vokey SM8 wedges. While those were being built, Hogan and Curran eyed Cabrera Bello’s metalwoods, resulting in a switch to True Temper Project X HZRDUS Smoke Black RDX shafts in his driver (60 grams) and 3- and 5-woods (80 grams). For the driver, they also had Cabrera Bello try the company’s new TSi3 driver. Using a 10-degree version of the club, Bello noticed better ball speed and launch conditions and put it in the bag.

Through 36 holes, he had hit 17 of 28 fairways at Winged Foot (ranked sixth) while averaging 319.3 yards off the tee, ranked 17th. It’s a marked difference from the way Cabrera Bello had been playing recently, having gone 29 starts on the PGA Tour since posting his last top 10 finish, which came at the 2019 Arnold Palmer Invitational.

The seeming ridiculousness of making changes to 13 of the 14 clubs in the bag was not lost on those involved, leading one to jokingly ask, “Should we re-grip the putter?” Alas, the putter remained intact.

Here’s all the clubs and shafts Cabrera Bello has in the bag this week at Winged Foot: