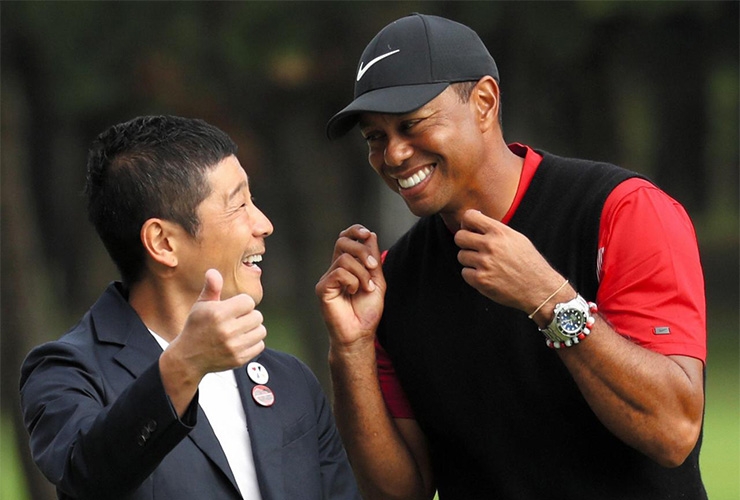 Tiger Woods and Zozo, Inc. founder Yusaku Maezawa share a laugh during the awards ceremony of the inaugural Zozo Championship, which Woods won in October 2019. The Asahi Shimbun

By Daniel Rapaport
At present, South Korea has some rather severe restrictions for incoming travellers. Any foreigner visiting the country is required to download an app at the airport and undergo a mandatory two-week quarantine period. In addition, no visitor is permitted to fly domestically within South Korea until completing the 14-day requirement. It’s part of the nation’s largely successful strategy to mitigate the impact of COVID-19—South Korea was one of the first countries to experience a major outbreak, but contact-tracing efforts and an advanced testing apparatus have coincided with steadily dropping infection and death rates.

On that front, it’s hard to argue with the mandatory quarantine. But as far as holding a golf tournament goes? It’s a bit of a deal-breaker.

“When those restrictions took place,” said Ty Votaw, executive vice president and chief marketing officer for the PGA Tour, when discussing the status of the tour’s Asian swing events, “we were confronted with the reality that if [the restrictions] stayed in place between then and the tournament, very few, if any, players would fly to Seoul, sit in a hotel for 14 days, then fly to Jeju Island for the CJ Cup.”

Without golfers, there are no golf tournaments. So if the PGA Tour wanted to host this week’s CJ Cup, or the Zozo Championship, set for the following week at Accordia Narashino Golf Club in Japan (where there are similarly stringent quarantine requirements), it would have to make alternative arrangements.

But before any of that could go forward, the tour needed approval and cooperation from both title sponsors, which signed up to host tournaments in Asia, not the western region of the United States.

Those discussions began in late April, and both CJ and Zozo were on board with moving forward.

“There were strong concerns about hosting the event, but our top management wanted to make sure that the show goes on,” said Brian Kim, executive director of the CJ Cup, which was first held in 2017. “We felt that we had obligations to the global golf audience to continue the legacy of the CJ Cup. Cancellation was not in our mind at all.”

That was no small commitment. CJ Group, a Korean conglomerate with business interests in a number of sectors, does significant food-services business in the United States, including its Bibigo Kitchen restaurant chain. But Zozo, a massive online fashion retailer based in Japan, does not have a presence in the U.S. market.

“We had so much momentum after last year, hosting the first PGA Tour event in Japan and having Tiger win it,” said Megumi Hatakeyama, golf marketing vice president for Zozo, Inc. “We didn’t want to let that fire go out.”

Logistical reasons forced the tour’s third Asia-based event, the WGC-HSBC Championship in China, to be cancelled. 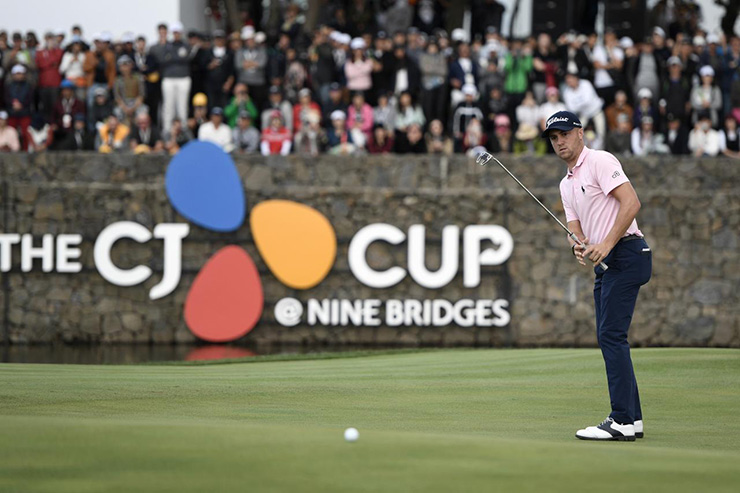 Justin Thomas has won the CJ Cup in two of its first three years as a PGA Tour event. JUNG YEON-JE

With the sponsors on board, next came finding host venues. MGM Resorts International had been in contact with the tour during the 11-week hiatus, as well as other sports leagues, about ways in which they could help sports restart in America. (MGM, it has been reported, offered to provide a “bubble” for the NBA). And the tour was familiar with MGM’s golf course, Shadow Creek in Las Vegas, because it hosted the $9 million match between Phil Mickelson and Tiger Woods in November 2018.

Two other factors worked in Shadow Creek’s favour: First, its standing as the premier golf course in Nevada—the Tom Fazio layout is No. 26 on Golf Digest America’s 100 Greatest course ranking—and second, and perhaps most crucially, the simple fact that the tour was already going to be in Vegas for the Shriners Hospitals for Children Open, at nearby TPC Summerlin. In addition, not having to accommodate fans from an infrastructure perspective made the task more manageable for Shadow Creek.

For reasons similar to Shadow Creek, Sherwood Country Club, located in Thousand Oaks, northwest of Los Angeles, quickly emerged as a potential one-time host for the Zozo. The Jack Nicklaus signature design is also a world-class golf course, ranked in 2019 at No. 195 in Golf Digest’s Second 100 Greatest Courses. It’s also just four traffic-dependent hours away from Las Vegas, allowing players to avoid flying between tournaments and making it easier for the tour’s travelling infrastructure—TV compounds, Shotlink machinery, golf equipment trucks, etc.—to get from place to place. The location is also preferable because the 15-hour time difference between Los Angeles and Tokyo means the tournament will finish at a manageable time on Monday morning for Japanese fans. There’s also the familiarity aspect, as the PGA Tour Champions has held an event there since 2016.

And then there’s the Tiger connection. Woods, of course, won his record-tying 82nd PGA Tour event last year at the Zozo. From 2000 to 2013, Woods hosted his foundation’s golf tournament at Sherwood and won the event there five times. As far as a place to defend his title and chance at win No. 83, it doesn’t get more comfortable. A deal was finalized at the end of August. Woods is committed to playing in the Zozo, as are Justin Thomas, Hideki Matsuyama, Rory McIlroy, Phil Mickelson, Jon Rahm, Rickie Fowler, Justin Rose and Jordan Spieth. The CJ Cup, with Thomas as the defending champion, has a similarly stacked field—16 of the top 20 players in the world rankings were entered before the withdrawals on Tuesday of Dustin Johnson, due to a positive COVID-19 test, and Tony Finau.

Surely the two events’ proximity to the Masters plays a role in the star-studded fields. The Zozo falls just three weeks before Augusta, and plenty of players will use the Zozo as their last start before the year’s final major. And both tournaments are an opportunity to get four guaranteed rounds in, as each features a 78-man field with no cut.

But don’t underestimate the impact the sponsors had in securing marquee commitments, as well as the two elite host venues the tour secured.

“I think every player, down to the last player, appreciates what CJ and Zozo,” Votaw said. “And the fields these next two weeks reflect that.”