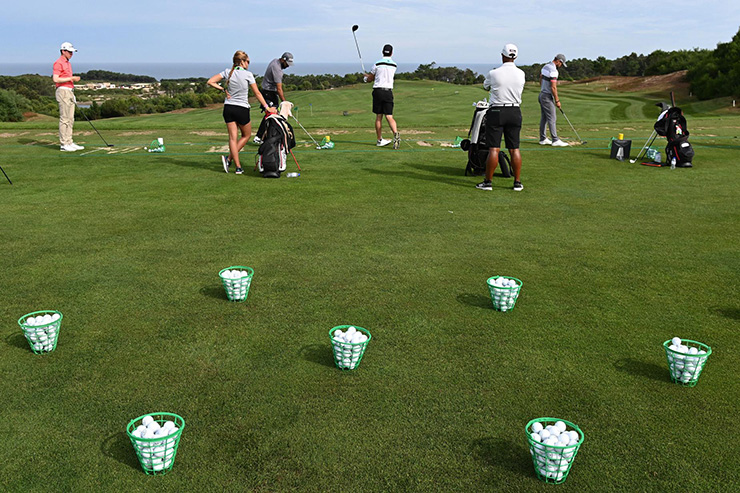 By John Huggan
For 13 weeks now, exactly one-quarter of this year like no other, the European Tour has been hosting post-lockdown tournaments. And things have not been easy for golf’s second-biggest circuit. With the exception of last week’s Scottish Open and this week’s BMW PGA Championship, both $7 million Rolex Series events, the prize money available to players has dropped markedly. In turn and across the board, the stature of fields has fallen commensurately.

Still, at least one positive aspect has stood out amidst any negativity. If COVID-19 test results are our guide, the European Tour’s “bubble” system—in which players are required to travel solely between the course and hotel during tournament week and eat with only designated “buddies” at specific locations—has been hugely successful. Only one player, Frenchman Alex Levy, has so far been the subject of a positive result. And only John Catlin, subsequently a two-time tournament winner, has been caught violating the prescribed protocol. The American was ejected from the bubble surrounding the English Championship and forced to withdraw from the tournament in August when he visited a local restaurant.

Perhaps even more happily, the obvious potential for mental health issues has been nullified as much as possible. Many precautions are in place. The tour offers the players access to a support hotline, which operates 24 hours a day. Nutritionist Graham Close has been advising the designated hotels on their menus. And players have the option of withdrawing from events at the last minute, with no threat of financial penalty. Given a ripcord they can pull, any feeling of being “trapped” is mitigated.

Still, no one is pretending that life inside the bubble is fun. But only one or two players, most notably Andrew (Beef) Johnston, who withdrew from the British Masters after nine-holes citing “unease” with the on-site environment, have had problems in that department.

Indeed, for the vast majority, the opposite has been the case. As the world sees every two years at the Ryder Cup, the concept of team is strong on the European Tour. And, as it turns out, not just at the elite level. Chats with a number of players at the Scottish Open revealed a strong appreciation for the fact that the tour is operational amidst a global pandemic. That sensation is, for now at least, superseding any negative feelings. Playing tournaments obviously preferable to not playing them, even if it means they are far removed from what used to be “normal.”

“Players are sticking together and looking after each other,” says Lee Crombleholme, a sports psychologist who works with tour players Andy Sullivan, Paul Waring, Kiradech Aphibarnrat, Chris Wood, Justin Walters, Alejandro Canizares, Matt Baldwin, Lee Slattery, David Law and Liam Johnston. “The first event [the British Masters] was a shock to just about everyone’s system. The feedback I got was that it was very demanding, to the point where it could provoke anxiety. It was a very strict environment, which of course it had to be. Everyone understood that. But I did recommend to my guys that they should, as much as possible, maintain the level of social interaction they were used to.”

Which is not to say that mistakes haven’t been made. Jordan Smith can smile now about how he walked off the course during the Andalucia Masters at Valderrama last month, but at the time the 26-year-old Englishman could take no more. That event was his seventh consecutive week in seven different bubbles. So his issue was not related to mental health, more mental exhaustion.

“It was the first day,” says Smith, who finished T-9 in the 2017 PGA Championship. “I wasn’t playing well. And I just wasn’t in the right head space. It had been a long seven weeks. I’m not sure what I was thinking playing that many in a row. I wanted to walk down the street and do normal things. I wanted to be at home on the sofa. I think everyone understood where I was coming from and where I was mentally. Just about every message I got afterwards was positive. But I must say it was nice to have those days off. I’ve been fine since.” 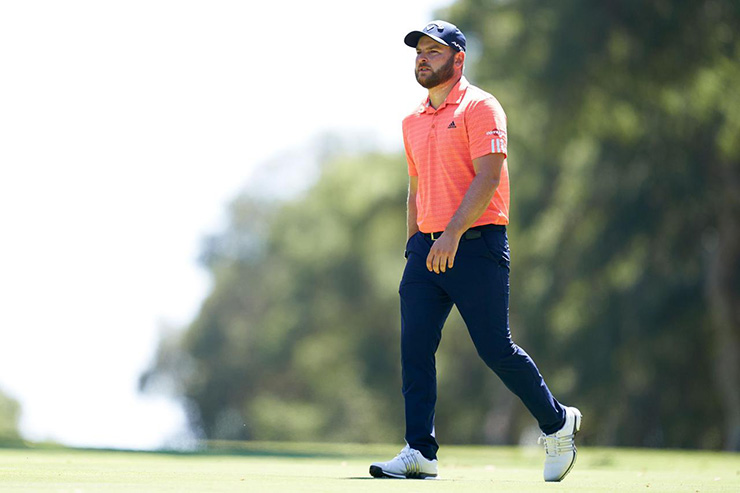 Jordan Smith admits playing seven straight weeks was too much as he explained why he withdrew after nine holes at Valderrama last month. “I wanted to walk down the street and do normal things,” he said. He returned shortly after and has been fine since. Quality Sport Images

Lucas Herbert is enjoying a similar degree of contentment, which is a nice contrast with the summer of 2019. It was then that the young Australian left the tour in despair, such was his state of mind at the time.

More than 12 months later, things are much improved for Herbert, who won the Dubai Desert Classic in February.

“I’ve dealt better with the issues I had last year,” he said last week in Scotland. “I don’t think mental-health issues ever really go away. They tend to linger in the background. It’s something you have to keep on top of. And I’ve done that quite well over the past few months. But I’m glad to be going home next week.”

Indeed, a word of caution is perhaps required amidst all the “happy family” talk with regard to the caring, sharing European Tour.

“For me, the current situation has been fine,” says Robert Rock, a 17-year European Tour veteran. “I tend to keep myself to myself once rounds are finished. Plus, I don’t play as much as I used to. So I’ve not really had any psychological issues. I choose to do my own thing, it just so happens that my thing fits the present more than most. But I do have sympathy for lads who are new to the tour. They won’t know so many people. They will be travelling to new places and maybe getting stuck on their own. That is tough. Getting to know people on the tour isn’t that easy right now.” 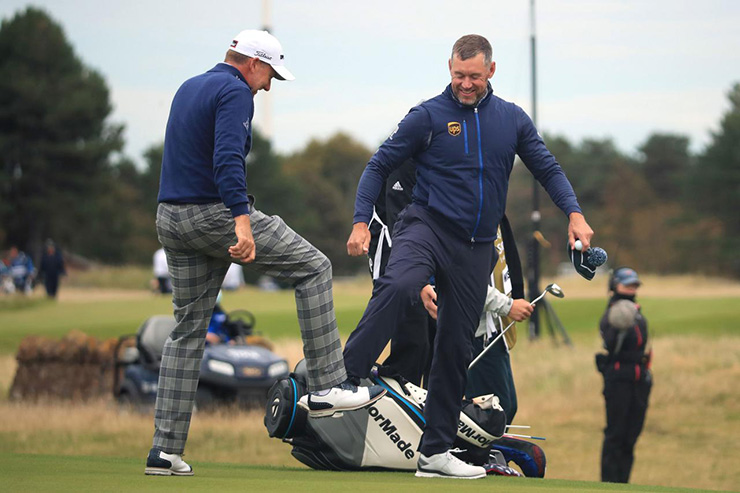 Ian Poulter and Lee Westwood shared a foot tap after their round at last week’s Scottish Open in acknowledge the social distancing practices that prohibit handshakes on tour. Andrew Redington

Matt Fitzpatrick, ranked No. 20 in the world and a cardholder in both Europe and the United States, is another voicing a need for awareness at all times. “In Europe, it is easy to feel isolated,” said the 26-year-old Englishman. “I can see why people might struggle with it after a while.”

Inevitably, comparisons have been made between protocols on the European Tour and what is happening on the PGA Tour, where the “bubble” in place since its restart began in June is less restrictive for players and caddies. A common perception is that things are more cautious in Europe, although the PGA Tour did have just 10 positives tests out of 3,591 administered from the Charles Schwab Challenge through the Tour Championship in September. Still, cynicism isn’t hard to find.

“In America, you can basically do whatever you want,” said Matt Wallace, like Fitzpatrick exempt on both sides of the Atlantic. “At the start I actually found that a bit nerve-wracking. The virus was in full flow, and I was seriously worried about catching it. All I saw was course and the house. In a way, I created my own bubble, which is why, when I was paired with Denny McCarthy and Bud Cauley [at the Travelers Championship in June] and Denny tested positive, I knew I was most likely OK. The only way I could have caught the virus was from him.

“In contrast, the European Tour is secluded and feels safe,” Wallace continued. “Which is not to say I’m enjoying it. It’s more fun on the PGA Tour because they give you more freedom. But I feel way safer in Europe. On the PGA Tour, you are relatively safe and very comfortable. On the European Tour, there is more security but less comfort.” 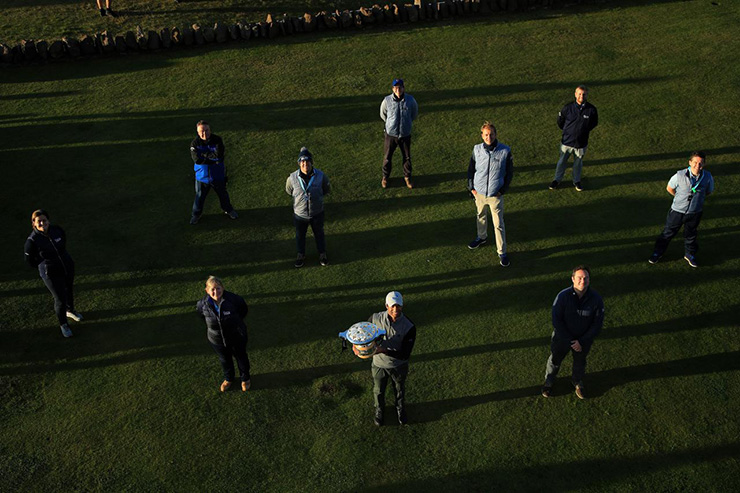 Even trophy ceremonies follow strict protocols, as Scottish Open champion Aaron Rai learned on Sunday when he posed with the tournament committee after his playoff victory over Tommy Fleetwood. Andrew Redington

Wallace’s view is backed up by Fitzpatrick.

“The comparison between the PGA Tour and the European Tour isn’t even close,” Fitzpatrick said. “The two bubbles are completely different. I wouldn’t even call what the PGA Tour is doing a bubble. But it’s very real on the European Tour. Things are much stricter there. You can’t go to the shops. You can’t go out for dinner once you’re in the bubble. I’m not saying things are better or worse on either tour. But I prefer the PGA Tour bubble just because you can have a bit more of a normal life.”

In the midst of this most serious of situations, there remains room for at least a little humor. Step forward caddie Billy Foster, who includes Darren Clarke, Lee Westwood, Sergio Garcia, Seve Ballesteros and Tiger Woods among his previous clients, and now works for Fitzpatrick.

“Selfishly, I have to say I’ve found a lot of benefits in the current state of affairs,” said the jovial Yorkshireman. “When I’ve flown to America, there is no one at check-in. There’s no one on the planes. There is no line at immigration. There’s no one shouting ‘ba-ba-booey’ or ‘mashed potatoes’ on the course. And we’re playing for the same money. So, from that point of view, it’s great.”

Preparations are underway for the upcoming* Ryder Cup