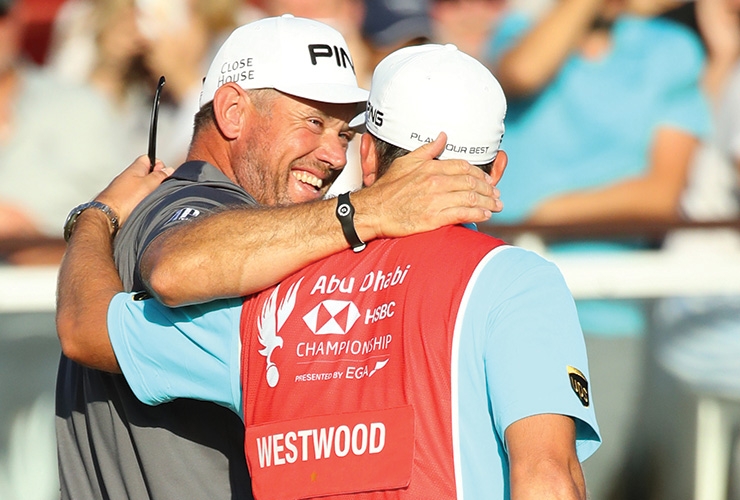 ByJohn Huggan
ABU DHABI — It must have been about 18 months ago that something changed in Lee Westwood. The amount of effort he put into his golf on the course didn’t alter, but his attitude on and off the course certainly did. And by the time he arrived at the Abu Dhabi HSBC Championship in January 2019, the then 45-year-old was looking and sounding like a new man.

With girlfriend Helen on the bag—as she had been when he won the Nedbank Challenge In South Africa two months earlier—Westwood finished a respectable T-16, nine shots behind the eventual champion, Shane Lowry.

“I think it helps having all the responsibility and not listening to another opinion,” said Westwood at the time.

“I’ve been out here 26 years. I ought to know how far it is, what club to hit, how to judge the wind and where not to miss greens. I feel like there is a lot more clarity to my head when I’m stood over the ball. There’s only one opinion and it’s mine. Even if I am wrong it is better to go with what I think rather than have a doubt in my mind.”

Exactly one year on from those now prophetic remarks, Westwood finished 15 places higher in claiming his 25th European Tour victory—and 44th worldwide. In so doing he is only the third man, following Mark McNulty and Des Smyth, to win on the Old World circuit in four different decades.

“I can’t see it being five,” was Westwood’s light-hearted response to the news.

Ross Kinnaird/Getty ImagesWestwood is greeted by young fans on the 18th green during the trophy presentation after his Abu Dhabi victory.

Anyway, displaying just about all of the attributes he had previously ascribed to his own self, the now 46-year-old Westwood shot a closing 67 at Abu Dhabi Golf Club to reach 19-under-par 269 for the week, two shots clear of Frenchman Victor Perez and a pair of Englishmen, Tommy Fleetwood and Matthew Fitzpatrick.

“I wasn’t really paying any attention to what other people were doing,” said the new champion, who picked up $1,166,660 for his trouble.

“I was trying to control me, control my emotions and control what I’m working on in the golf swing. Just managed to do that. With what I’m working on, if I don’t quite do it, I hit a pull. But I hit some good shots coming in. I’m really pleased with the way I controlled myself.”

Westwood’s only moment of doubt down the stretch came at the par-4 16th. An almost perfect tee shot left him an appetizing angle into the flag but the appearance of that dreaded pull left him just off the putting surface, maybe 15 yards from the cup. The approach putt was good for weight but not so much for line, and the four-footer for par was always left of its required line. His fourth bogey of the week was on his card.

Now needing two pars to win, Westwood played the final two holes immaculately. His full swing—always a strength—crucially found the penultimate fairway, as it did the green. The putt for birdie came up short, never a good sign in any leader, but the par was safe.

Experience then took over on the par-5 final hole. A 3-wood from the tee took any trouble out of play and the hybrid second was unerring, right into the middle of the distant putting surface. Two putts later he had his 21st birdie of the week (along with one eagle) and a victory that surely seemed unlikely to all of those who watched the flawed performance Westwood produced in his 10th and most recent Ryder Cup appearance at Hazeltine in 2016.

Speaking of which, the biennial contest between Europe and the U.S. is never far from Westwood’s mind. An assistant to European skipper Thomas Bjorn in 2018 and a strong favorite to be captain in 2022, he is now a legitimate contender to play for an 11th time later this year at Whistling Straits.

“I’ve been on losing Ryder Cup teams and I’ve been on seven winning ones,” he said. “It’s a big honor to represent Europe in the Ryder Cup. And I would love to play another as long as I’m good enough. I wouldn’t want a pick, but if I qualified I would definitely play. So I’ll be trying my hardest. But you can’t control qualifying for a Ryder Cup team. I’ll just be trying to do the small things right and it will lead on to the big things, like qualifying for the side. For now, it’s just nice to come out and keep proving that I’ve still got it.”

For those in Westwood’s immediate wake, there was also much encouragement for the year ahead. Celebrating his 29th birthday with a nine-under-par 63, Fleetwood was one of those. Round by round, the 10th ranked player in the world improved both in his ball-striking and scoring.

“I’ve been practicing really well,” Fleetwood said. “But on Thursday I got out there and didn’t play as well as I wanted to. But that was good in a sense. My tendencies showed up and knew what to work on. As the week progressed, my iron play really improved, especially over the weekend. I feel like this is as sharp as it has been for the last year. I’m happy that I performed and happy with how I feel. It was nice getting the juices flowing.”

Meanwhile, Fitzpatrick finished with a bogey-free 67 that left the 25-year-old Yorkshireman encouraged at the beginning of a year in which he is surely destined to make a second Ryder Cup appearance. He even found time for a wee joke.

“That Tommy Fleetwood, he’s so annoying,” he said with a smile. “He just comes from everywhere.”

The same might be said of the third runner-up, Victor Perez. Winner of the Dunhill Links Championship last October, the Scotland-based Frenchman matched Fleetwood’s 63, playing the final four holes in four under par. More and more, he looks like la chose réelle (the real thing).

“Winning at St. Andrews showed me that I can do it at this level,” Perez said. “I come into these types of tournaments feeling a lot more comfortable now, al ever different from 12 months ago. It shows how quickly things can go in this game. Now I’m going to try to keep on going.”

The last words, however, must go to an emotional Westwood, who shed some uncharacteristic tears in his post-round TV interview. Which was fair enough.

At a time when many observers had largely written off his ability to compete at the very highest level of the game, the man who has 19 top-10 finishes in major championships without a victory is still going strong, his work with psychologist Ben Davis much to do with that fact.

“Ben has instilled in me the fact that I’m playing the game I love for a living, and I should enjoy it,” said Westwood, who is in middle of an attempt at a “dry January” that he felt may prematurely go by the wayside with a few celebratory toasts.

“Sometimes it gets to the point where you don’t enjoy it enough. We’re lucky to be doing what we’re doing and a lot of people are far less fortunate. So I don’t really lose my temper anymore. I’ve never been a club breaker, but I don’t really get wound up too much. I’ve become much more analytical and less emotional on the golf course.

“All of that is spreading through my whole game and my putting,” Westwood continued.

“Everything really. I’m on a very even keel, even if the ball doesn’t go in. The only thing I can control are the movement and the actions I’m doing to roll it on line to the hole. It might hit something or I might misread it. But I brush it off and move on to the next. That approach is serving me well. And this week I played some quality golf.”

That he did. Not for the first time and, on this form, surely not for the last.