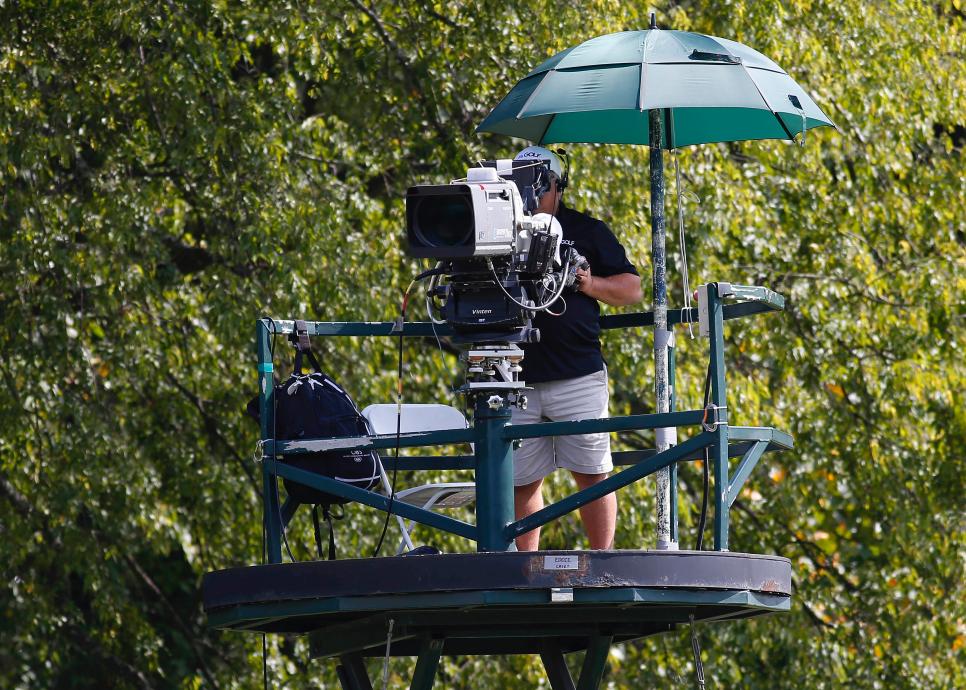 By Tod Leonard
Golf broadcasting has travelled light years since the days of those “Shell’s Wonderful World of Golf” matches that began in the early 1960s, when they drove around a single camera on the back of a truck. Heck, the biz has come a long way since the last U.S. Open played at Torrey Pines in 2008.

Like imposed yard lines for football games, we now wonder how we ever got along without tracers or putting “make” percentages. But we also know there is plenty more technology coming, and NBC reached another frontier last week at the U.S. Women’s Open that will be on display for a larger audience for the 121st U.S. Open.

On the sixth hole on the Torrey Pines South Course alone, there will be 88 cameras to capture the players’ swings. Let that sink in. Eighty-eight. On one tee box. That’s more cameras in one spot than NBC had on the entire grounds at Torrey Pines in 2008. The cameras, set up in a ring around the tee box, are part of the 4DReplay developed by Cisco that show a player’s swing at 360 degrees, and the video can be paused at 34 different junctures in the motion.

What makes the system truly revolutionary is that after recording the swings, the video goes to a 4DReplay truck on-site, and those producers push the content to the U.S. Open app, where fans can choose and watch the swings of players of their choice on their phone.

“It’s a really good tool for Paul [Azinger] to analyse these swings,” said NBC golf producer Tommy Roy. “And I can’t wait to see what [Bryson] DeChambeau’s swing’s going to look like there. So that’s why you require all of those [cameras] there.”

Elsewhere on the course, Roy laughed when he ran through the various other cameras that would be in the mix throughout the course. Included in those are the scorpion crane, rat cams and a frog cam. “The veritable wild kingdom out there,” Roy said.

Roy had an explanation for each of the various cameras.

Scorpion crane: “We have at the first hole that’s covering tee shots where, it’s basically a speed shot, where the crane is positioned halfway between the teeing ground and the landing area, so the ball goes whipping by, and then it reveals what the next shot is. And that crane moves, then, to 18 where we do it on our approach shots as well.”

Rat cam: “If you remember the old TV show from years ago called ‘Rat Patrol,’ it’s what inspired that name. It was a show about these Army guys that rode around in Jeeps and had machine guns on the back of them, and that’s sort of what these vehicles look like that we have. They’re basically a super golf cart with a camera on the back of it that can zip around, and we use those to receive the tee shots that are struck.”

Frog cam: “We have that in the pond at 18. You know that’s called Devlin’s Billabong, where I believe he made a 10 en route to finishing up an event there one year [1975]. That hole, it’s very easy to suck a ball back off the front of that green, and so we have a camera positioned on that bank at all times to be able to cut to immediately to show the ball going into the water. So we have that, a camera actually in the water.”

Roy and his crew are excited about the week because of the experience they had in 2008, as well as the opportunities that Torrey Pines and the San Diego coastline have to offer.

“It’s a gorgeous piece of property with the canyons and the barranca, which it actually creates more opportunities for us, like the drone,” he said. “You can’t have a drone flying over top of people, over galleries, and so there’s plenty of places for him to fly there, which is terrific.

“… I love having some holes out by the ocean where the wind is going to blow, and then having the finishing up by the clubhouse where it’s a reachable par 5 with Devlin’s Billabong in the front creating all this danger, the risk/reward. You won’t get me saying anything bad about this place. It’s awesome.”