Here is everything that happened at ‘MGM Resorts The Challenge: Japan Skins’ while you were sleeping 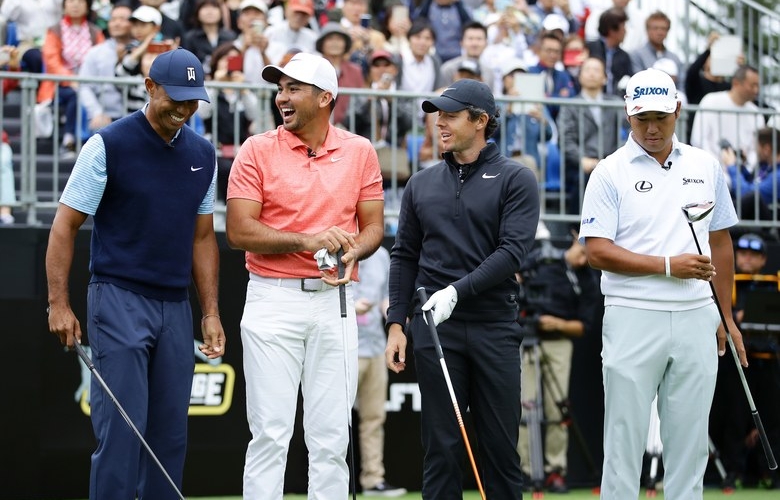 By Christopher Powers
If you were expecting the excitement of Sunday at the Masters, that would have been silly of you, because that’s not what MGM Resorts The Challenge: Japan Skins was going for. Instead, the made-for-TV event’s goal was to entertain, and it did just that, even if it took its time in doing so.

Eventually, Tiger Woods, Jason Day, Rory McIlroy and Hideki Matsuyama settled in, and those who settled in to watch on their couches well past midnight on the East Coast were treated to a fun, laid-back affair. As for those who went to bed, don’t worry, we’ll get you all caught up below. Here’s everything you missed from The Challenge while you were in sleeping.

RELATED: Tiger Woods doesn’t rule himself out as a Presidents Cup captain’s pick

The foursome needed time to warm up

The boys were slow in getting started over the opening few holes as they felt out the course and the format. Day struck first with a birdie at the par-3 third hole, winning three skins and $30,000.

On No. 4 came the event’s first “charity challenge,” which allowed the players to choose which of the hole’s two greens to play to. As Geoff Ogilvy went on to explain during the broadcast, many Japanese golf courses have two greens at each hole, one for the summer months and one for the winter. The summer green is usually seeded with Bermuda or zyosia grass, and the winter is seeded with bentgrass. The idea is that customers will always have a good putting surface to play on no matter the time of the year.

After all that background, it felt deflating to say nothing really happened on the hole, which was tied with pars. Tiger made one of them, causing him to jokingly say, “Look at that, I played a hole,” a jab at his slow start. (We’ll cut Tiger some slack given this was his first competition since August.) He finished the next hole with a par, too, but this time it surprisingly earned him two skins and $20,000 when Day, McIlroy and Matsuyama all found the water off the tee on the par 3.

Rugby players spice things up
After six quiet holes, four rugby players in Japan for the Rugby World Cup added their own brand of excitement. Mike Tindall of England, George Gregan of Australia, Bryan Habana of South Africa and Brian O’Driscoll of Ireland were part of the second “charity challenge,” which paired them each with one of the pros. The hole ended in a tie, but it was an electric tie at that. Matsuyama made the first birdie from way downtown, causing his partner, Habana, to jump into his arms/scare the hell out of him. Moments later, O’Driscoll buried his birdie putt for the halve:

Hideki and Rory will both remember the 7th for two very different reasons.

That’s one sweet putt by O’Driscoll, whose swing was by far the most impressive of the four rugby players.

At the next tee, Woods said what we were all thinking about Habana and Hideki’s celebration:

A big putt from Hideki Matsuyama.
A bigger hug from @BryanHabana.

Tiger gets on track
Later this week, Woods makes his 2019-’20 PGA Tour debut in the ZOZO Championship, which will also be played at the same course (Accordia Golf Narashino Country Club) as The Challenge. We’re guessing Tiger will be happy he got an early look. The skins format allowed Woods to settle in and come up clutch when he needed to, like at the 8th hole, where $40,000 was on the line:

A birdie for @TigerWoods from the rough.

Rory joins the party
For much of the day it was the Tiger and J Day Show, both on the scoreboard and on camera. Their back-and-forth with each other was pretty cool. As for McIlroy, he didn’t have much going … until the 12th, which just so happened to be worth $60,000 after ties at nine, 10 and 11:

Rory was *this* close to holing out on the 12th hole at #TheChallengeJapanSkins. ?pic.twitter.com/0U2mNidoNZ

The most impressive part about that shot was that he hit it while scarfing something down. Then, seconds later, GOLFTV’s Henni Zuel conducted an interview with Rory as he walked to the green, and she asked about Brooks Koepka’s recent comments. Naturally, McIlroy was as honest as ever:

Reason No. 1 million McIlroy is the best quote in golf. Oh, and after delivering this gem, he made birdie and took $60,000. Take that, Brooks!

The one-club challenge!
After Matsuyama got on the board with his first skin at the 13th, the last and most intriguing “charity challenge” awaited on the 14th hole. The challenge? Players could only use one club on the par-5 14th, setting up an interesting decision on the tee box. We came close to some real fireworks when McIlroy nearly decided on 5-wood but got talked out of it:

Rory quickly ditched his 5-wood on the One Club Challenge. pic.twitter.com/czqPgkHCn0

Woods went with 4-iron and striped one off the tee:

Day, also with a long iron, did this from a greenside bunker:

Jason Day, from a bunker, with a long iron. ? pic.twitter.com/X5hXEOEWzB

Immediate Seve Ballesteros comparisons were made, and they were 100-percent warranted. Incredible shot. We need more one-club challenges on the PGA Tour, preferably on the 72nd hole of every event. Too much? Keith Pelley would do it.

The sun is going down, but the competition at #TheChallengeJapanSkins is heating up. ? pic.twitter.com/wpR59aMqmW

Cha-ching ? @JDayGolf picks up the four skins and $80K to take the lead heading to 18.

By the way, this was the second time on the day that a hole was won with a par. Hmm … $80K to make a par as a tour pro. Good work if you can get it.

Day finishes it off
Everything was still up for grabs at the 18th hole, which was worth $100,000. Even Matsuyama, sitting at just $20,000, could have stolen the overall title. He didn’t, nor did Woods or McIlroy, who made the best effort of the three to tie the hole with a chip that just missed the left edge. But par wasn’t enough to beat Day, who got up and down for birdie to finish it off:

We have a winner in Japan. ?

Obviously, it’s not an official victory, but it’s always nice to come out on top no matter what’s on the line, especially against the likes of Woods, Matsuyama and McIlroy. The extra $210,000 ain’t so bad, either. By the way, Day won while wearing Tiger’s sweater vest, which Tiger must have loaned him earlier in the round. Don’t believe us? Check the logo:

Tiger literally giving people the shirt off his back. YLTSI pic.twitter.com/2Xc1V8TQxn

It might not be a Sunday red polo, but a TW sweater vest could be the next best thing. No chance Day is giving that thing back.