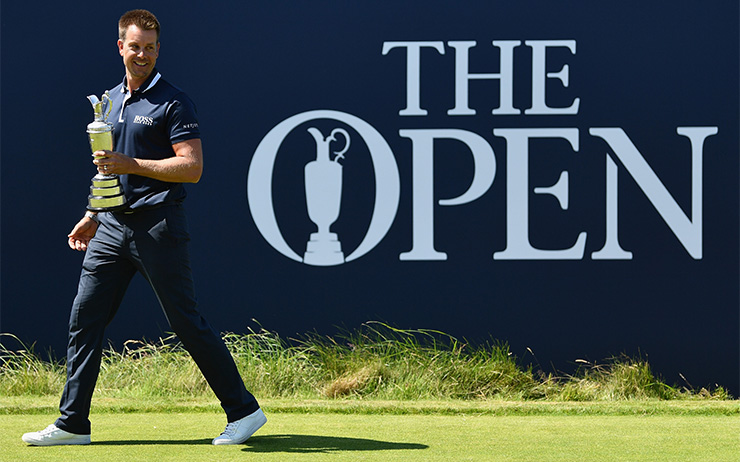 It turns out reports of Henrik Stenson’s form demise has been slightly exaggerated, by the Swede himself.

The Open Champion cut a downcast figure when a potentially great finish at the Scottish Open last Sunday turned into a good one, a final round 68 earning the 41-year-old a share of 26th place at Dundonald Links.

Asked afterwards to assess his chances of emulating Padraig Harrington by defending the Claret Jug at Royal Birkdale, Stenson offered a cautionary response. “I think we’re hoping for a lot in terms of what we saw this week.” It was an answer that no doubt had a little scar tissue attached to it from a Saturday 75 in miserable Ayrshire weather.

Fast-forward to the media centre at Royal Birkdale Tuesday and the real Henrik Stenson was back.

“Yeah, the spirits might be another five percent up compared to Sunday after a couple of dropped shots coming in,” Stenson joked with the international press corps.

“It could have been a good finish or a good final round at the Scottish Open. Lipped out for eagle on 14 to go for 7-under for the round, and then finished 4-under. So it was not the finish — I guess it was a bit of frustration on that, in one of the interviews after the round there.”

So, can you rekindle that Royal Troon magic from 12 months ago?  The answer was a definite maybe. Remember his spirit-metre is still on low charge.

“I don’t feel like I’ve had the consistency I want to have [but] to be honest I didn’t think I had that last year if I compare it to 2013 for instance. Even though it was the best year of my career last year, I felt it was well timed. I played my best at a few events that really mattered.

“I’m kind of working on that, trying to get that consistency back. Whether it’s going to be good enough this week or not, I can’t tell you, but I couldn’t tell you how I was going to win before the week last year either. In golf, I guess you’re only a couple of good shots and picking up some nice solid feelings away from having a really good week.

“So I hope this could be the case and more than anything I’m going to enjoy being out there. I worked hard my whole career to be able to win that championship last year, and I can’t really put the pressure on myself that I’m going to win it again. It took a lot of chances to win that one, so I’m just going to go out there and do my best, really.”

Stenson was quizzed on why he thought The Open had consistently produced the oldest winners of any of the majors over the past quarter century.

A player 38 years or older has won the Open 32 percent of the time in the last 25 years. In the other three majors combined, that average hovers at 10 percent. The contrasting averages for 40-year-old winners is just as vast: 20 percent at the Open, 5 percent at the rest.

“I think the type of golf that they play on links courses and also when the conditions and the weather gets tough, I think experience and having done it over the years certainly helps in that aspect,” he said.

“I think when you’re coming out, you can be a great young player, but if you haven’t been tested in those elements a number of times, I think you’ve got less chances of succeeding. That being said, it doesn’t have to be so, but I guess the age of the winners kind of speak that language.

“Just being tested on those conditions for a long time, it certainly helps, when you’re standing there on a Saturday or a Sunday and the wind is howling and the type of shots that you need to play, you don’t always necessarily need to play those shots in the modern golf. It tends to be more we give it a full rip off the tee, and wherever you have it, you can try and hit a 9-iron or pitching wedge on the green a lot of times, and that doesn’t always work in these conditions and on these golf courses, I think.”