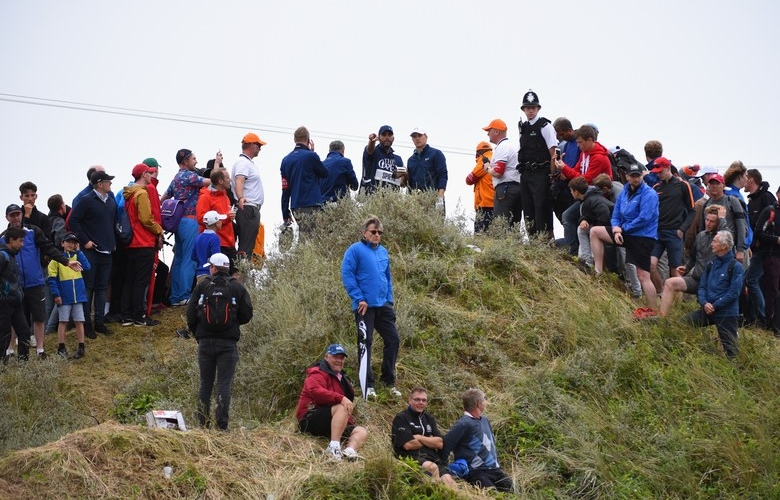 By Alex Myers
Whenever the first Jordan Spieth biopic comes out, what happened on Royal Birkdale’s 13th hole during the final round of the 146th British Open will feature prominently. The strange and somewhat miraculous bogey kept the young star in contention and set off a brilliant four-hole stretch that earned him a third major before his 24th birthday. How that hole played out has been discussed at length already, but this is the best account of it that we’ve heard so far. And not surprisingly, it came from the other half of Team Spieth.

On Tuesday, Spieth’s caddie, Michael Greller, joined SXM PGA Tour Radio to talk about the big win and describe that crazy scene. Greller says he was amazed by how calm things were for the duo considering the situation. Well, once Spieth’s golf ball was found, that is. It’s hard to be calm when you’re looking for a needle in a haystack filled with fans.

RELATED: ‘This is as much of a high as I’ve experienced in my life”

“I was forearm shivering guys in the crowd there initially in the fescue,” Greller said. “I mean, there were 500 people, we can’t find the ball and I’m thinking someone could grab it. It was just absolute chaos and then out of right-field you hear someone yell there’s a ball on the other side of the dune. And Jordan goes bouncing up there like a billy goat and I went back to the fairway because I didn’t think it was a ball, I thought there was no chance he was over there.”

But it was there. And although there was still plenty of drama to play out — Spieth went 21 minutes in between hitting shots — the 23-year-old was in control despite most golf fans wondering what the heck was going on as he took a tour of the equipment trucks parked on the range.

“From that moment, when he found that ball, I don’t think people can appreciate his being in the situation and for him to have the thought process to think is that range in play or out of play. You would assume it’s just out of bounds. He asked the question and found out it was in play so he knew he could go as far back as he wanted by taking an unplayable.”

Greller says the reason it took so long was that it was a tricky ruling, and had little to do with them figuring out their line or distance for the next shot.

“While he was doing that, it gave me the time to work my sixth grade math numbers and A squared plus B squared equals C squared, because it was 125 yards off from where Kuchar was,” said Greller, a former sixth-grade math teacher.

Of course, after taking his penalty and his drop, Spieth hit his third shot back in play and got up and down for a bogey. He then played the next four holes in five under to claim his first claret jug.

“The cool part about it . . . was how slowly everything moved from a mental standpoint,” Greller said. “There wasn’t a sense of panic, it’s over.”

Have a listen to the clip:

.@JordanSpieth's caddy Michael Greller gives you a first hand account of what was going through the Texan's mind on the 13th hole @TheOpen pic.twitter.com/uNefivIaUq

The Open 2017: ‘This is as much of a high as I’ve ever experienced in my golfing life’

The Open 2017: Jordan Spieth thanking Matt Kuchar in his victory speech might have been the Open’s best moment

The Open 2017: Michael Greller helped Jordan Spieth more than you know on Sunday