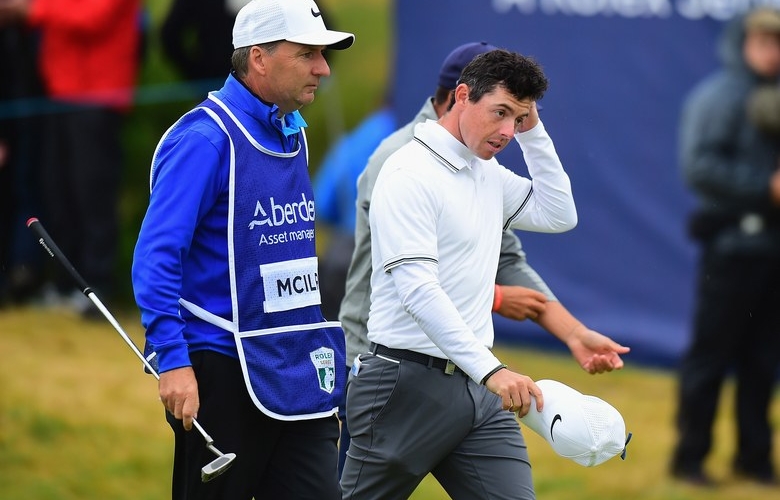 This is getting to be a habit—and not in a good way. For the third time in Rory McIlroy’s last four starts, the Irishman’s golf will not be on public display on a tournament weekend.

Adding a second-round 71 to the opening 74 he shot over the Dundonald Links, the four-time major champion missed the cut at the Aberdeen Asset Management Scottish Open. As a result, the 2014 Open champion at Hoylake will arrive next week at at Royal Birkdale seriously short of competitive practice and, more importantly, a long way short of his best form.

Not surprisingly, McIlroy’s participation in Scotland ended badly, and typically, given his well-chronicled putting woes. Needing a birdie on the par-5 ninth hole (his 18th) the World No. 4 pulled his approach well left of the green, where it struck a spectator. The pitch-and-run that followed was decent enough, expiring roughly six feet from the cup. The putt, however, can only be described as horrendous. Badly pulled right off the putter face, the ball missed the hole by a good two inches on the left.

“I knew what that last putt meant,” McIlroy sighed. “I knew the cut was going from one under to even and back again. I just pulled the whatever off it. It was a terrible putt.”

The bigger picture isn’t much more encouraging. Having missed a good chunk of the early season due to injury, the last thing McIlroy needed right now is to miss even more competitive practice.

“I haven’t had enough tournament rounds this year with the injury,” he acknowledged. “I’ve missed a lot of events. So it’s been tough. And I’ve been playing catch-up all year. I just haven’t played enough. I’d love to have played more.”

But, as ever, he was keen to look on the positives of the past two days rather than the negatives.

“I’m frustrated, but at the same time I thought I saw some good signs out there,” he insisted. “My putting improved this week, compared to last week. My wedge play, too. But there is still room for improvement. It’s not that bad though. I shot one under par today. I’m close without me being able to put my finger on anything specific. It’s not like I’m shooting 76s and 77s. It’s all around even par. But that isn’t good enough these days.

“I’m waiting for something, some sort of spark to go right. The last couple of weeks have not been like that. I just have to keep plugging away and hope it turns round next week.”

Still, for all his obvious disappointment, McIlroy is surely correct to say he not far from producing better form. His immediate problem, however, is that his mistakes are bigger than they should be. Take his play on the 430-yard par-4 13th. Having made double bogey there on Thursday, McIlroy repeated the feat a day later, needing two shots to escape a greenside bunker.

“I shot three under on the front nine today and felt pretty good,” he said. “But the 13th hurt me. There was so much sand in that bunker. I told myself I had to hit it really hard. And I couldn’t have hit it any harder. But it still didn’t come out.”

So it is on to Birkdale.

“If I go down there and shoot even par in the first two rounds, I’m not going to be too far off the lead,” was McIlroy’s parting shot. “I’m not that far away. I’m just the wrong side of something good. I just have to stay patient. I know I’m saying the same things every week at the moment, but hopefully next week I can say I stayed patient and it all worked out. Birkdale will be a tougher test, but I’m more than capable of going there and shooting a score in the 60s and getting myself into contention.”

There was maybe one little piece of good news for the beleaguered Irishman. The weather forecast for the west coast of Scotland over the weekend is best described as “bleak.” So a wee trip south to Lancashire might just prove more beneficial than battling wind and rain for two days.