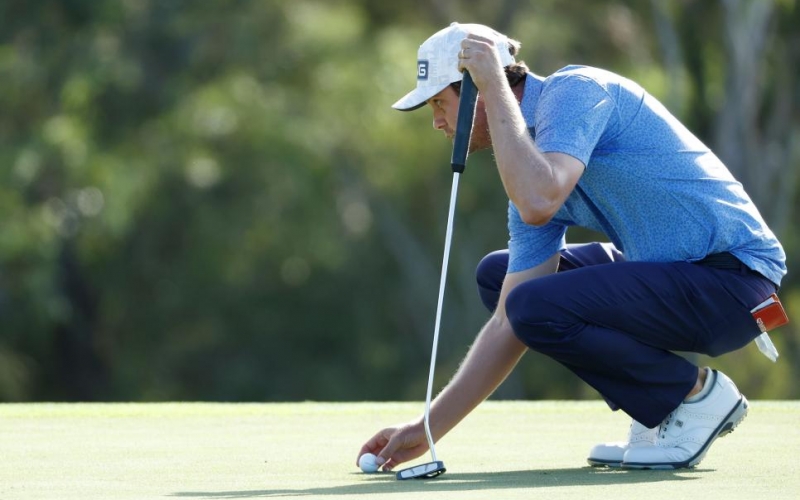 Cliff Hawkins
Harris English lines up a putt on the 18th green during the final round of the 2021 Sentry Tournament of Champions.

By Brian Wacker
HONOLULU — Success can sometimes have its pitfalls. Take Harris English, for example.

In 2013, English won twice in a five-month span on the PGA Tour. Just two years removed from turning pro, many considered the four-time All-American out of the University of Georgia to be one of the game’s rising stars. And that’s when Callaway came calling.

“They made a nice offer,” said English, who until that point had used Ping equipment.

But with the new deal came new clubs. That meant the putter had to go, too.

Not that English minded. He said the experience was awesome, that it was like being recruited to college all over again, and he had a respectable 2014, notching five top-10 finishes for the year, followed by second- and third-place finishes each of the next two years. Still, at the end of 2016 his contract with Callaway ended, so he decided to go back to Ping, re-signing with the company in January 2017.

That decision eventually reunited him with a familiar tool—Ping’s Scottsdale HoHum mallet putter, 35½ inches long with 3 degrees loft, the same one he’d used in college—and for his two prior PGA Tour wins. English put the club back in play midway through the 2017 season and it has been his primary putter since.

“My assistant coach took it off the putting green, and he was like, ‘Man, I’m a terrible putter. If I can make putts with this putter, anybody can putt with it,’” English said, describing how he first came to use the putter while in school. “It’s been a staple that I’ll always go back to. It’s something with the face: It’s pretty soft. It’s very unique, easy to aim. There’s a reason why I go back to it. It’s kind of an old faithful putter, and I feel like I’ve had some of my best putting weeks with that putter.”

That included last week at the Plantation Course, where he led the field in strokes gained/putting and won in a playoff over Joaquin Niemann.

Now he’ll try to pull off an Aloha double the way Justin Thomas did when he won both of the tour’s Hawaii events in 2017. And he’ll have the familiar flat stick by his side.

“I [first] played Ping clubs since I was 12 years old, and just have a lot of confidence in them,” English said. “It’s tough to say, but it was a good run when I was in my 20s, but I feel like I’m really happy with what Ping is doing and confident in what I’m playing right now.”