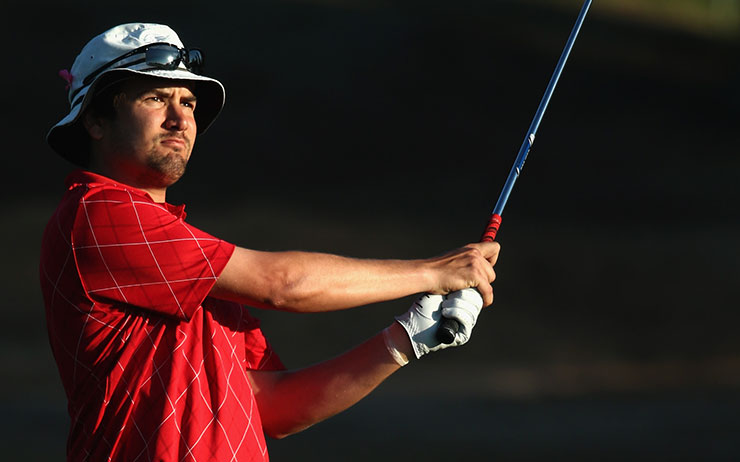 Dubai-based amateur Michael Harradine admits he has some serious soul searching to do after a fifth fruitless attempt to earn an Asian Tour card.

The 33-year-old Swiss national team representative carded a second successive 73 at Suvarnabhumi Golf & Country Club Thursday to miss the cut in the final stage of qualifying by six shots.

Harradine’s heartache was matched by reigning MENA Tour order-of-merit champion Craig Hinton after a second round 74 saw the Englishman also fade to +2 and an inconsequential share a 193rd place.

Middle East interest is now focused on two-time MENA Tour winner Luke Joy who snuck into the weekend on the number, -4, following a second successive 70. Joy was one of 30 players in a share of 92nd place; the top 80 and ties made the cut.

Australian Todd Sinnot backed up his opening 64 with a seven-under 65 to remain atop the leaderboard in Thailand where the top 35 and ties earn tour cards for 2017. Sinnot was joined at -15 by countryman Richard Green following a sizzling 63 from the former Dubai Desert Classic champion, and Japan’s Junya Kameshiro.

Harradine was close to abandoning his dream of a professional career six weeks ago but found some surprising form in the first stage of qualifying, finishing equal top of his section B tournament on a different course at Suvarnabhumi.

But the short game he used to finish -22 in the first stage deserted him the past two days and left him contemplating the future.

“To be honest, I am not too sure,” said the Sharjah Golf & Shooting Club member of his next move.

“Like I said, I was set on putting away the clubs a few months ago but now I am not too sure. I would love to be able to play golf professionally and actually make a living out of it but who wouldn’t. I am going to have to have a think about it when I get back to Dubai and see. “

Harradine had been worried about an uncooperative driver heading into the final stage but it turned out to be the rock of his game.

“I only just missed two fairways yesterday which got me into way more trouble than they should have and hit every fairway today,” he said.

“The strongest part of my game last week [his short game and putting] was what I really struggled with these two rounds. My distance control was horrendous, couldn’t get any wedges close enough for an easy birdie.

“Last week it felt like I couldn’t miss a putt, instead now I felt like I had no feel whatsoever… that’s golf I guess.”

Two three putts in his first four holes Thursday was a deflating start for Harradine in a round where he knew he needed to go low.

“I slowly managed to get it back to -1 after 10 and at that point I thought that if I could get another four birdies, I might have a chance of making the cut. But I stupidly went for a pin that I shouldn’t have on 11 with a 3 iron which ended up in a double.

“That took any wind I had left out of my sails that and wasn’t able to get it back on track. I made a birdie on 15 but then three putted again on 17 to finish one over.

“I’m just very disappointed, especially after having played and putted so well last week. I can’t be anything but disappointed with that.”

Joy went to bed Thursday four shots outside of the top 35 and ties but is a positive mood after reaching the final stage of qualifying for the third time.