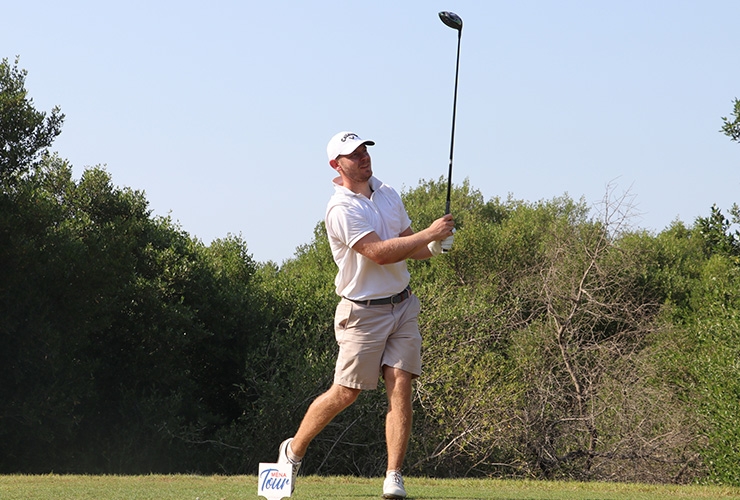 Scotland’s Scott Henry fired a 66 Tuesday to edge into the lead at the RAK Open. Photo: Joy Chakravarty/MENA Tour.

By Kent Gray
Scott Henry will take a one-stroke lead, European Challenge Tour pedigree and some handy family support into the final round of the $75,000 Ras Al Khaimah Open at Tower Links on Wednesday.

With brother-in-law Christopher Walker on his bag, Henry has compiled rounds of 65-66 to be the pacesetter in the MENA Tour by Arena event on 13-under-par.

The 32-year-old Scot is the closest of margins clear of Swede Niclas Weiland (67) and first-round leader Marco Iten (68) of Switzerland heading into the final round of the regional developmental circuit’s final regular-season event. England’s Kyson Lloyd (65) starts in solo fourth on 11-under-par 133, while Australia’s Daniel Gaunt (68) continues to nip at the heels of Journey to Jordan leader MG Keyser in a share of fifth place on nine-under-par 135 alongside Sweden’s Gabriel Axell (68). South African Keyser is five-under-par, four shots adrift of Gaunt, heading into Wednesday.

Henry is a Challenge Tour winner and showed the class that carried him to the 2012 Kazakhstan Open with a superb display from tee to green at Tower Links on Tuesday, especially on the front nine which included an eagle on the 7th.

The Clydebank pro had rattled off seven first-round birdies with the help of Walker, a regular Ladies European Tour (LET) bagman for Henry’s wife Kylie, and backed it up with seven more and the eagle in his second round.

“I was five-under-par through seven holes and I think it was the best I could have ever played tee-to-green,” said Henry.

“The back nine was a bit up and down and I played some scrappy shots coming in. But a birdie on the last was a good way to finish and I am looking forward to the challenge tomorrow.

“I have my brother-in-law on my bag this week and we had great fun on the course. He caddies for my wife (Kylie) on the LET, so he knows his business and he helped me enjoy my round.

“It doesn’t matter whether I am in the lead because I will have to go and play some aggressive golf and shoot some low number tomorrow. There are a lot of birdies on this golf course, so the only way I can protect my lead is if I make a few myself and stay ahead.” 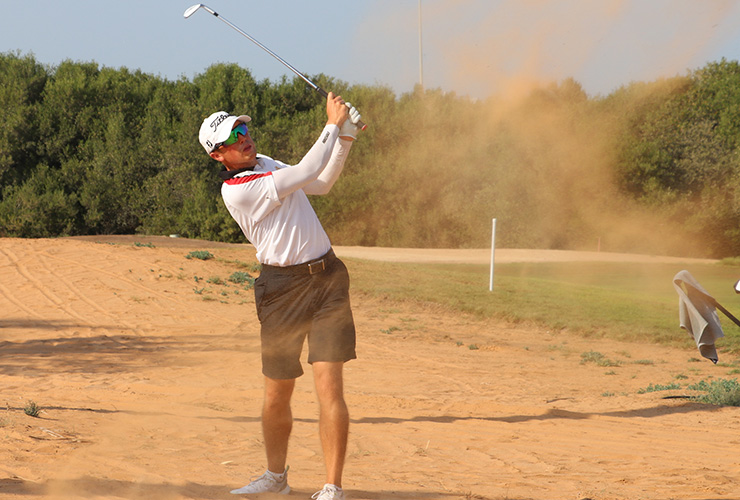 His playing partner Weiland had an equally good start and was also five-under-par through seven but could not keep pace with Henry on the back nine. Even though he was four shots worse than his opening round 64, Iten was happy with his 68.

“The only disappointment was a bogey on the 17th when I really wanted a birdie there and the last. At least I got one on the 18th. I am playing good golf, so let’s wait and see what tomorrow brings,” he said.

Sweden’s Erik Lindwall made a hole-in-one on the par-3 8th hole, hitting a perfect six-iron shot from 214 yards. That helped him finish the round on four-under-par 68.

Hole in One!! Sweden’s Erik Lindwall aced the par-3 eighth holes at @TowerlinksGolf today in the second round of the RAK Open by Arena.

His ‘perfect shot’ was with a 6-iron from 214 yards.@RAKTourism pic.twitter.com/C0zPbDwV9j

The cut was applied at even-par 144 and 48 professionals and nine amateurs made it to the final round on Wednesday. Among those going through was Othman Almullah (70), the first professional golfer from Saudi Arabia, who birdied his final three holes in fading light to finish on even-par 144.

Saudi Arabia’s first professional golfer and a popular member of our Tour @o_almulla_golf made his first pro cut at the RAK Open by Arena in stunning fashion with three birdies in his last three holes!

He spoke to us about what the achievement means to him… @Golf_Saudi pic.twitter.com/MuaACRoSjC

Recent Journey to Jordan #2 Championship winner Robin ‘Tiger’ Williams is the leading amateur heading into the final round on -5 after rounds of 69-70. Dubai’s Arjun Gupta (-3) and Toby Bishop (-2) also survived along with amateur Journey to Jordan leader Curtis Knipes (1) although the Englishman will be wary of Williams above him.

After the giddy highs of last week when he became the youngest winner of an Official World Golf Ranking, Josh Hill unsurprisingly missed the cut by three shots but can take solace from the fact he backed up a scrappy opening 78 with a 69 on Tuesday.