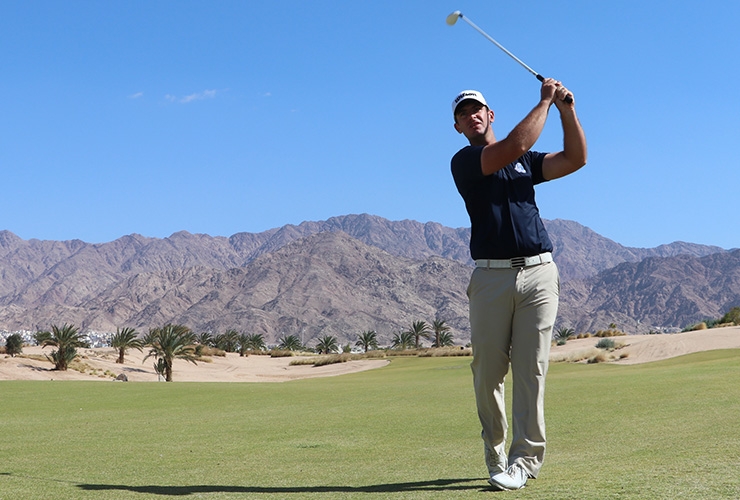 By Kent Gray
Forget Goliath – this is a battle between David and David.

More accurately, it’s a battle within the battle at this week’s $75,000 Journey to Jordan #2 Championship back at Ayla Golf Club in Jordan, the MENA Tour by Arena’s destination partner.

The leader of the overall Order of Merit after the 54-holer in Aqaba, which marks the official halfway stage of the regional circuit’s regular season, earns a precious invite to the Trophee Hassan II from June 4-7. Furthermore, either of the Davids, Langley and Hague, will win free accommodation at the European Tour event’s official hotel in Morocco, nothing to be sneezed at when you are trying to make your way in the expensive world of professional golf.

Langley has the advantage heading into Monday’s opening round – just. The 25-year-old Marlow man leads the Journey to Jordan OOM (not to be confused with the name of this week’s tournament name) but only by $784 from Hague. Langely also has special memories of Ayla G.C. having captured the season-opening Journey to Jordan #1 Championship at the Greg Norman-designed layout.

“Absolutely. The spot in Morocco is on my mind and if someone else in my situation says they are not thinking about it, they’d probably be lying,” said Langley.

“But it is not something that is going to control my shots during the tournament. It is something you think outside of it. I will be focused on each shot that I hit when I play the tournament.

“I have very happy memories of this golf course, and obviously, having played it quite a few times, I am very familiar with it. I drove the ball very well and made almost every putt from inside 10 feet when I won the Journey to Jordan #1, and I will have to do pretty much the same again this week.”

The equation for Hague, meanwhile, is simple. With $400 assured for the last-placed player this week, the Yorkshireman will have to finish inside a two-way tie for the 12th place or better to have any chance of overtaking Langley. 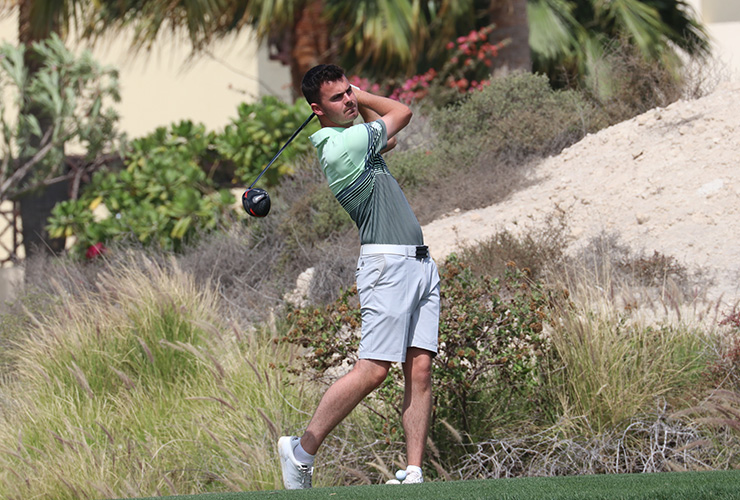 Hague does have the advantage of momentum after winning last week’s Bahrain Open while Langley struggled with a final round 79. It was almost a case of reverse fortunes; when Langley won the season opener, Hague started his professional career with rounds of 81-77 to uncomfortably miss the cut.

“I won’t say Morocco is my top priority right now. I am pretty good at taking every competition as it comes. It’s just a consequence of playing well and that’s what I’d be focused on this week,” Hague said.

“I did not have a great start to my professional career here, but I am looking forward to competing on this course. I think I was too aggressive here the last time and threw away a few shots through careless mistakes. That’s something I want to avoid.”

Hague, who turned pro after MENA Tour by Arena Qualifying School at the same venue, has not touched his clubs after playing the Pro-Am in Bahrain a day after his victory.

“I got into Aqaba only last night after facing a few travel issues and today was the first day I actually practiced. It’s been a crazy couple of days with so many messages from friends and people I know. I am so looking forward to going back home next week, but I have a job to do before that.”

Fittingly, Langley and Hague have been paired together for the first two rounds and start their campaigns on Monday at 9.20am local time (11.20am UAE time).