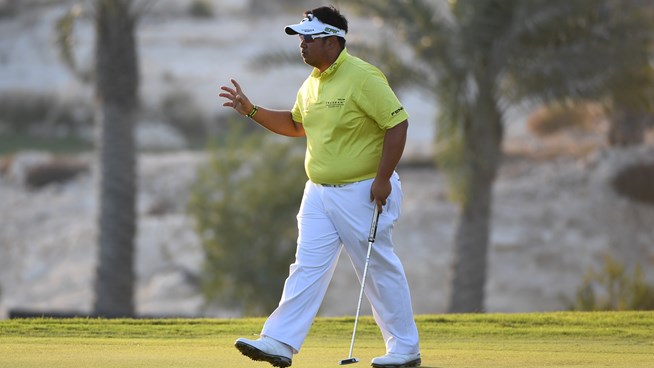 A fast getaway on moving day will be no cinch after Friday finished with a record nine-player grid lock atop the Commercial Bank Qatar Masters leaderboard.

Welshman Bradley Dredge, who carded an even par 72 following a sizzling opening 64, held onto his overnight lead but now has eight players for company at the summit on -8.

There was a nine-way tie for the first-round lead at The Celtic Manor Wales Open in 1997 but never before in European Tour history have nine players shared the lead after 36-holes.

Another seven players are a shot adrift and with the cut made at -2, 70 players in total have made the weekend at Doha Golf Club. Each and every one of them is a genuine chance in the filling event of the European Tour’s tasty Desert Swing sandwich.

Koren Jeunghun Wang, a two-time winner last season and the European Tour’s Rookie-of-the-Year, and Spaniard Jorge Campillo made the biggest impression on the leaderboard Friday with second round 67s seeing them leapfrog 28 places into a share of the lead.

We have a nine (yes nine!) way tie for the lead after 36 holes. pic.twitter.com/fQYjKI6K1U

Among those to make the cut was Englishman Chris Paisley whose luck turned on the 17th hole when he sucked a 9 iron into the cup on the 135-yard par 3.

“I was in between a wedge and a nine-iron, and decided to go with a little nine-iron. I just hit it perfectly and when it landed, I said, ‘go in’, and it did, so I’m just delighted,” said Paisley, who also birdied 18 for a tournament-changing 67.

“It was a great feeling, but strange, as I went 27 holes this week without making a birdie and was three-over-par, struggling to make the cut. All of a sudden I made a couple of birdies and had a hole-in-one and I was inside the cut mark. I suppose it shows you…never give up!”

Paisley joins Jarrod Lyle and Van Zyl as the only players to make an ace in the 2017 Race to Dubai so far.  It was his fifth ace but first on the European Tour and the 10th in the 20 editions of the Qatar Masters. He is the first to do so on the 17th hole since Warren Bennett 12 years ago.

Tommy Fleetwood was among the big names to miss the cut with rounds of 73-73 a week after capturing the Abu Dhabi HSBC Championship. Other notable names with the weekend off are Matteo Manaserro, Thongchai Jaidee (both -1) and Stephen Gallagher at +2 alongside Fleetwood.