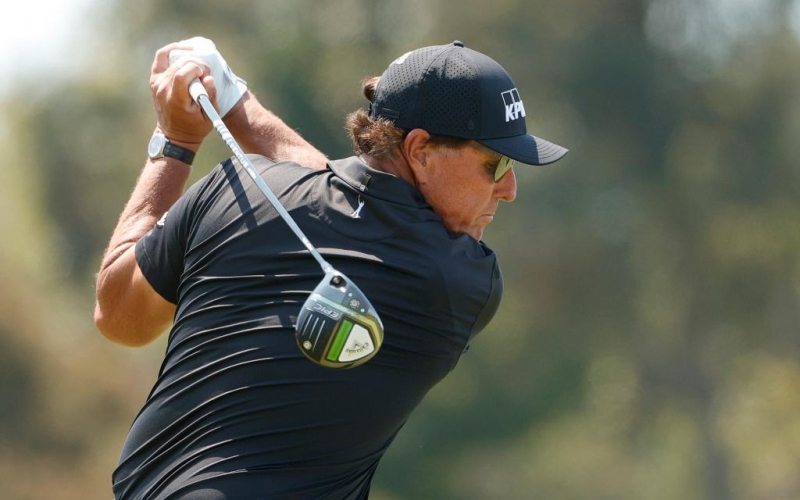 By Mike Stachura
Regarding Bryson DeChambeau and Phil Mickelson and their lust for 48-inch drivers, golf’s ruling bodies have only one thing to say: Not so fast.

Technically, Tuesday’s announcement that the USGA and the R&A will reduce the maximum shaft length from 48 inches to 46 inches counts as a suggestion. It’s what’s called a Model Local Rule, which is generally designed to give tournament organisers or presumably any tour the right to implement a rule limiting driver length. But a spokespeople from the PGA Tour and the LPGA Tour confirmed its tours would implement the local rule in 2022, with the PGA Tour confirming Jan. 1, 2022 as the first date of enforcement. The USGA’s Thomas Pagel, senior managing director of governance, said the new limit will apply to all 14 USGA championships, also beginning in 2022.

“I think it’s very fair to say that this is a proactive measure,” he said of the new limit, which has been discussed and researched by the USGA and R&A since 2014 with a few stops and starts in between. It was announced as a proposal back in February.

“You saw a trend of more players experimenting, and I would say the governing bodies have been accused in the past of being reactive, and this was an opportunity for us to be proactive and cap something that is going to have a really small impact as far as the number of individuals. Had we waited, I think the change would have been that much harder.”

To be fair, Pagel said no one player’s use or success with a longer driver accelerated any decision. In other words, Mickelson’s win at the PGA Championship in May with a driver that measured 47.5 inches did not impact any decision on the shaft length rollback. Pagel called the model Local Rule “the least disruptive” approach, making it clear that the rule does not affect recreational golfers or any manufacturer interested in selling drivers longer than the new 46-inch limit.

“If there are recreational golfers that happen to be playing with something longer than 46 inches they can continue to play with that if they’d like,” Pagel said. “We felt it was appropriate to handle as a Model Local Rule now. It doesn’t mean that at some point in the future that it becomes a rule of golf, perhaps even a shorter length club is even considered. That’s nothing we’re discussing now, but it’s difficult to say never.”

Here’s the statement from the PGA Tour on Tuesday acknowledging it would implement the rule: “After understanding the feedback received from the golf manufacturing community, we also undertook a survey of usage of clubs in use across the PGA Tour, PGA Tour Champions and the Korn Ferry Tour and found that a very small number of players either have used or are currently using clubs greater than 46 inches. The PGA Tour Player Advisory Council recently reviewed the subject and we have concluded that the PGA Tour will implement the Local Rule on Jan. 1, 2022.”

The LPGA Tour didn’t provide a definitive timeframe with its response: “[We] plan to implement the new rule at some point after the 2021 season. We have already started communication with the small number of players who may be affected by the change, to ensure they can make any necessary adjustments in a timely manner.”

Pagel said golf’s other professional tours and major championships “have been involved and engaged” with the decision on the new rule, and he expected them to announce their decisions shortly. While contacted by Golf Digest, the European Tour and Augusta National did not respond with comment. A PGA of America spokesperson said the organisation would review the rule change and make an announcement before any 2022 PGA event. Several major manufacturers contacted by Golf Digest declined to offer a comment at this time.

For perspective, driver shaft lengths have increased over the last quarter century, both on the PGA Tour and in the marketplace. It was typical in the 1990s for drivers played on tour to be in the 43-inch range, and now the majority of tour players use a driver between 44.5 and 45.5 inches. In addition to Mickelson’s and DeChambeau’s interest in drivers at the current 48-inch limit, the LPGA’s Brooke Henderson also has played a 48-inch driver in the past. Almost all drivers being introduced by manufacturers now feature a shaft length of 45 to 45.75 inches.

Though some manufacturers have introduced drivers with shaft lengths longer than 46 inches, few have been successful. A decade ago, TaylorMade’s Burner Superfast 2.0 was 46.5 inches and was popular for a time before the company’s next model dropped back to a shorter shaft. Cobra introduced a lightweight 48-inch shaft in its Long Tom driver in 2011 that saw little traction.

Of course, the evidence is not universal that a longer shaft will result in longer driving distance for every player. John Spitzer, the USGA’s managing director of equipment standards, said that multiple tests it has conducted show a three- to five-yard difference by going from 46 to 48 inches. “When we started looking at this, we only saw a couple of players on the tours using drivers that were over 46.5 inches,” Spitzer said. “And now we’re seeing an order of magnitude bigger than that.

“And they’re not going right from 46 to 48, but they are inching up, and as they inch up, eventually the manufacturers would start to offer clubs that were longer. So the timing was just right.”

John McPhee, professor of engineering at the University of Waterloo and a member of the Golf Digest Technical Panel, and his students have developed an optimised biomechanical/physics golf simulation that projects a six-yard gain in carry distance when an average human golfer goes from optimal launch conditions at 46 inches to optimal launch conditions at 48 inches, but his model showed a 10-yard gain in the optimals when going from 44 inches to 46 inches.

In a paper published on the subject submitted for the International Sports Engineering Association 2022 conference, McPhee and his student Spencer Ferguson conclude, “A rule to limit club length to 46 inches might help curb future distance gains at the elite level, but is unlikely to reduce current driving distances, as five of the most recent leaders in driving distance on the PGA Tour used drivers less than 46 inches in length.”

For what it’s worth, according to PGA Tour statistics, Mickelson was about five yards shorter this year than he was in 2019 and his rank in strokes gained/off the tee still hasn’t moved into the top 150. Nevertheless, Mickelson recently went to social media to criticise the USGA for looking to roll back shaft length.

“What data was there to say that the driver length should be capped at 48 inches?” Mickelson said, shaking his head in a Twitter video posted last month. “What data is there that says it should go to 46 inches? We’re addressing the wrong problem, and we’re misreading the data yet again much like the grooves in 2010.”

Of course, Mickelson’s diatribe seems misplaced since he devotes much of it to arguing against the shaft length rule’s effect on average golfers, which the new rule would not impact in the least.

Pagel said the shaft-length rule addresses elite players now to avoid any further issues later. He said they do not see any evidence that long drivers are commonplace on tour or in the marketplace or among young developing golfers. But Mickelson and DeChambeau have been vocal about exploring the use of longer shafts. Pagel said the time to act was now.

“At the highest level, we were seeing the numbers were slowly creeping up,” he said. “With the swing speeds at that level and the abilities at that level, that’s where it would start to take off and that would be the start of a trend. Once the elite level players start to do something it will trickle down. How long it takes, it could have been 10 years before we would see a bunch of kids trying long drivers, but the point is let’s be proactive now.”

Pagel was quick to note that driver shaft length is not the governing bodies’ ultimate solution to the driving-distance question. New USGA CEO Mike Whan even went so far as to say in a statement, “Admittedly, this is not the ‘answer’ to the overall distance debate/issue, but rather a simple option for competitive events.”

The USGA and R&A are seeking comment on the broader topic of distance with a Nov. 2 deadline—so there is more to come, Pagel said. Among the topics being reviewed are a tightening of the tolerance zone for the measurement of springlike effect and new distance standards for measuring a golf ball’s optimal flight conditions. But the ideas go beyond those two proposals, which also were announced in February with the shaft-length rule.

“We’re in this critical discussion about the role that distance plays in the game and that’s ongoing,” he said. “Once we have that feedback we anticipate spending a significant period of time reviewing that and allowing it to inform whatever the next steps might be. People will say we move slow, but in this case I think it’s intentionally slow. We don’t want to act with haste, and I think that’s important for the industry.

“This model local rule by no means is intended to be a solution that helps to stop the cycle of increased hitting distances. We’re committed to what we said before and there will be solutions but this is not that solution. What they are, we’re not sure yet, but this is not it.”

“We’re committed to our desire to stop the cycle of increased hitting distances. We have the long-term health of the game in mind. How is the game healthy 20, 50, 100 years from now. That’s something we remain committed to. We know elite players can achieve distance increases through using a longer club, and as an industry as we go through the critical conversation about the long-term health of the game and what role distance plays with that, we just thought it was best to cap this now while we have the rest of that discussion.”