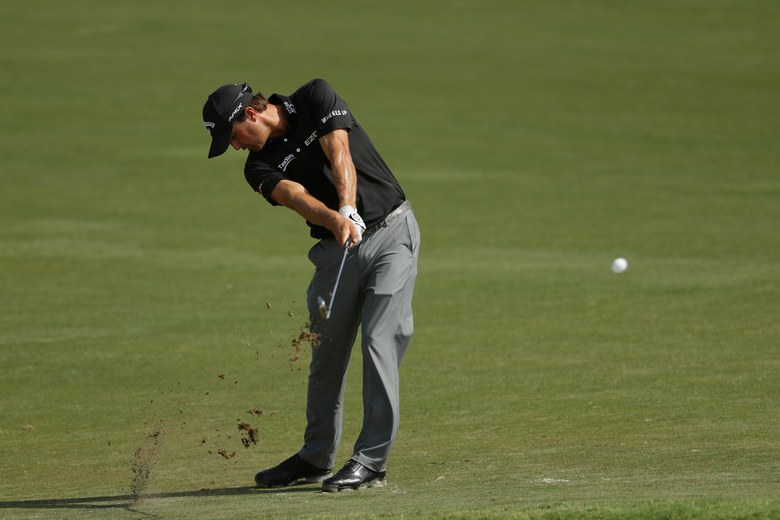 On paper, Quail Hollow looks like a bomber’s paradise. It says 7,600 yards on the card, but damp fairways and firm greens mean it plays even longer than that.

Kevin Kisner is proving that precision works just fine, too. Kisner is by no means short off the tee–averaging 291 vs. co-leader Hideki Matsuyama’s 302–but it’s been his ball-striking that has sparkled on the way to the back-to-back 67s that have put him on top. Kisner is hitting 75 percent of his fairways and 83 percent of his greens, and he’s given himself great looks from the correct positions on Quail Hollow’s tricky new greens.

You can’t will yourself a batch of professional athlete coordination by the weekend, but anybody can use three of the keys that make Kisner’s iron play so strong.

“Whatever your handicap is, just having some extra awareness is going to help you,” says top Georgia teacher John Tillery, who is Kisner’s instructor. “Kevin has a lot more ball control than amateurs, but plays a draw almost exclusively. But when I start working with amateur players–who obviously have less control than Kiz–they usually tell me they want to hit it straight. Develop some sort of reliable curve and embrace it.”

That kind of awareness and acceptance goes with yardages, too. “Every tour player knows how far his shots carry to the yard, but amateurs’ hearts are broken almost every day at my teaching center when TrackMan delivers the news about how far they hit it,” says Tillery, who is based at Cuscowilla Golf Club in Eatonton. “It doesn’t take any special effort to know your numbers, and to quit selecting a club that takes a 9-out-of-10 rated strike to carry that front bunker.”

The first mechanical adjustment you need to make isn’t the sexiest, but it’s where good shots start–and don’t slice. “So many players have weak, palmy grips and open clubfaces,” says Tillery. “You should copy Kevin’s grip–with the V’s between the thumbs and the sides of the hand pointing to the right chest and the handle more in the fingers of the left hand.”