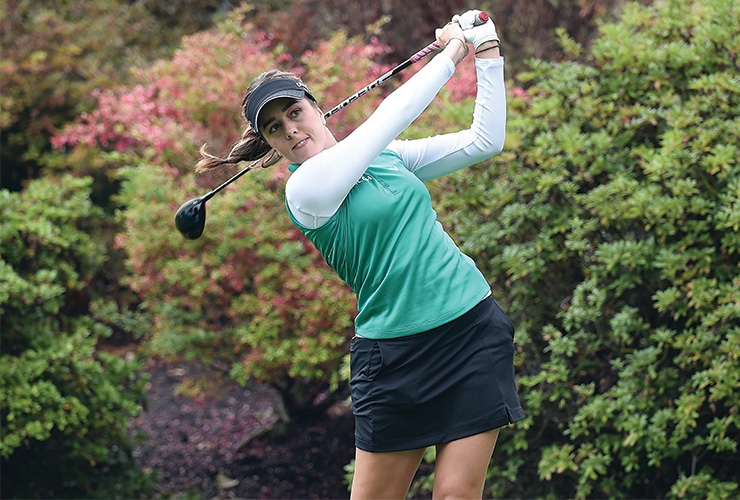 By Kent Gray
Georgia Hall has quietly gone about turning herself into Britain’s most successful female golfer since her last start in the UAE, a self-titled “tired” T-21 finish at Dubai’s Ladies European Tour stop in 2017. It was a performance camouflaged by the fact Hall had already wrapped up that season’s LET Order of Merit title.

Fast-forward to the present and what isn’t cloaked his her new-found standing even if countrywoman Charley Hull, at 27th, was eight place above Hall in the world rankings at press time. See, there’s a major edge on Hall’s CV and now the 2019 Women’s Open champion has an LPGA Tour title to rival Hull as well. The Cambia Portland Classic victory in mid-September mightn’t have matched the statue of Hull’s Tour Championship win in 2017 but was just as satisfying after a couple of years of close calls in the U.S.

Forget not the perfect 4-0-0 record either as Europe upset the U.S. at the 2019 Solheim Cup, including a memorable 2&1 singles victory over Lexi Thompson on the final day at Gleneagles.

Hall has since collected an MBE for services to golf, an ambassadorial role with the Royal & Ancient and two Rose Series victories en-route to her return to the Middle East for next month’s US$285,000 OMEGA Dubai Moonlight Classic.

The 24-year-old Dorset-based Englishwoman won’t be the highest ranked player and wasn’t part of the new Pro-Am, floodlit format last year. She’s never teed it up on the Faldo course at Emirates Golf Club, nor under lights. But it’s just another trial the two-time LET Order of Merit champion is happy to accept in a year full of unexpected challenges.

Indeed Hall will surely be one of the toughest players to beat if she can quickly adjust to the bright LEDs and testing greens on a course designed by another tenacious compatriot, Sir Nick Faldo. Given her recent form and endless determination, it will come as no surprise if that exact narrative plays out at the November 4-6 event.

You win the 2019 Open at Royal Lytham & St. Annes. You’re honoured with an MBE. You play a starring role in the Solheim Cup victory. You claim your maiden LPGA Tour title. What’s next for Georgia Hall?
Just to keep doing what I’m doing, which I know sounds a little boring, but it seems to be working for me. I’d like to be as consistent as I possibly can and I’m sure that with that, more wins will come. I’d like to move up the world rankings, and secure a spot to represent Great Britain at next year’s Olympic games. 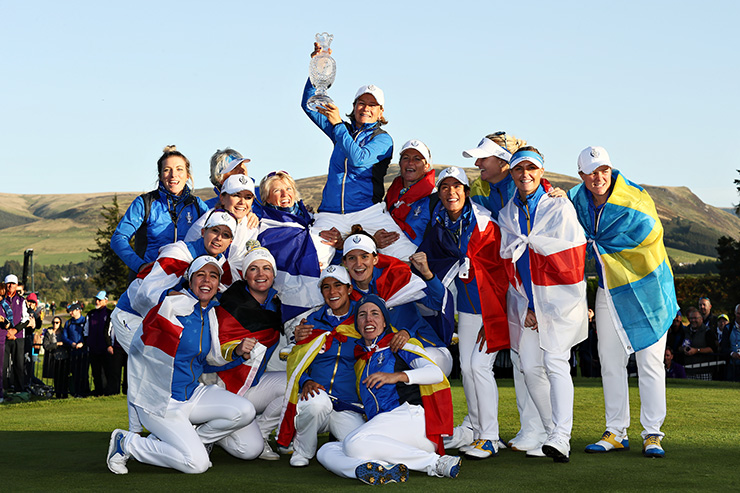 With the beauty of hindsight/time to reflect, does your LPGA Tour breakthrough mean to you now?
I’ve had to work hard to get myself into a position to win in the U.S. I worked hard on my short game, and those high shots into greens, as well as distance control with my wedges.  I wouldn’t say that I didn’t believe I could win in the U.S. because I did but it was a relief to get it done and it’s a massive step for me in terms of knowing that I can do it.

Maybe we shouldn’t be surprised given how 2020 has developed but the Cambia Portland Classic wasn’t your normal tournament week. Wildfires, poor air quality, reduced to 54 holes, lighting delays on the Saturday. In a strange kind of way, did it sum up 2020 thus far?
Yes, it really was crazy. We went from dangerously high temperatures the week before at the ANA Inspiration (major championship) where caddies were allowed to use buggies because it was so hot, to the fires in Portland. It really was thick – you couldn’t see across the course from one hole to another, and on practice days they limited the amount of time we were allowed to stay outside to a couple of hours.  And we lost a couple of days totally, so I didn’t play the whole course before the event began. Lucky I knew it from previous years. It’s actually one of my favourite courses.

You’re on record as saying that you didn’t “really take it all in and enjoy it properly” after your Open Championship triumph.  you were determined to enjoy your Portland win but it can’t have been easy with all of the COVID conundrums we are faced with nowadays?
To be honest it’s been pretty tricky to celebrate. We had a week off immediately after Portland so I had the time to reflect on things a bit but I didn’t want to go out to any bars or restaurants so we stayed in and recharged the batteries. Hopefully I’ll be able to have a bit of a celebration when I get back to the UK but things are pretty strict there COVID-wise, so I won’t be able to do much. 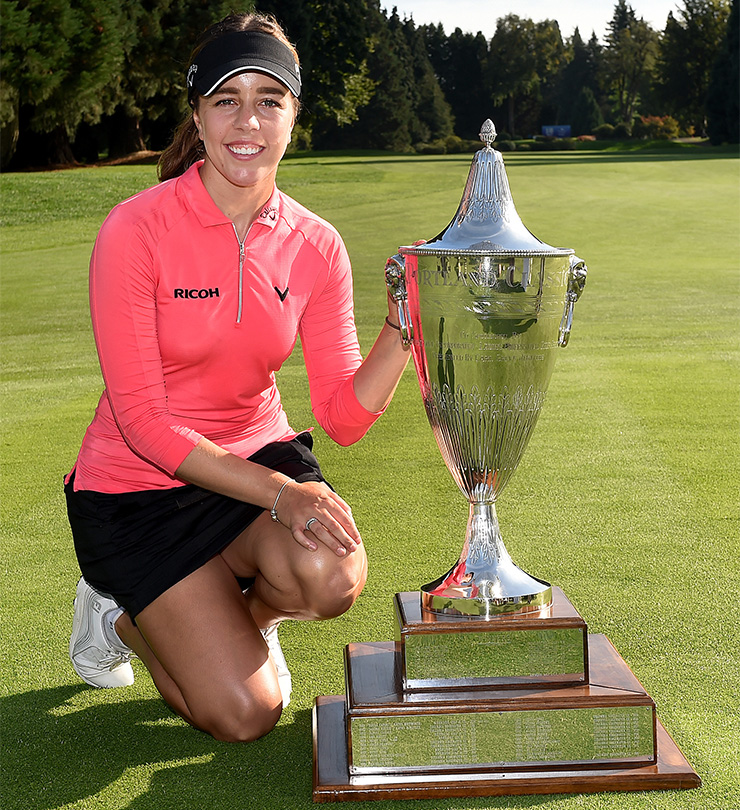 Hall won the Cambia Portland Classic after edging Ashleigh Buhai
with a par on the second hole of a two-way playoff. Getty Images

Talking of pandemics, can we rewind to the start of 2020. What were your goals for the year and how hard has it been to pivot professionally?
At the beginning of the year we obviously had no idea how it was going to pan out. Thankfully I got three events under my belt before the COVID break came but it did mean that I went all the way to Australia for one week, as we should have played Thailand and Singapore on the way home, but they were cancelled!  I’m not sure I’d have travelled to Australia had I have known how that was going to pan out. It was difficult when our restart kept being delayed but I made the most of lockdown and really felt ready once we were able to get back out there.

How did you stay sharp golf wise and how have you coped with all the coronavirus restrictions on a personal level?
We had eight weeks of total lockdown when we couldn’t leave the house other than to pick up essential shopping.  Funnily enough, I’d literally just moved into my new home in Dorset on the south coast so it was a great opportunity to do some painting and decorating and get things straight. I also worked on my fitness, so in a funny way I quite enjoyed it and it came at a good time for me.  Once golf courses opened up again in mid-May, I had plenty of time to get my game in shape before my first tournaments back in August.

The two rose series wins must have been huge, just to get back into competition mode?
It was a fantastic initiative and we are all so grateful to Justin and Kate [Rose] for coming up with the idea and making it happen. We played some great courses and received some decent media coverage as there wasn’t much other sport going on at that time.

You finished T21 on your last visit to Dubai in 2017 having already wrapped up the let OOM for the first time. You admitted at the time you were tired after a long season and probably didn’t play as well as you’d have liked so fond memories tinged with feelings of unfinished business in Dubai?
Yes, for sure. I’m looking forward to being out there again and hopefully finishing a little higher.  It’s towards the end of the season again but I should feel a little fresher than I did at the end of the 2017 season.

You weren’t part of the introduction of the new Pro-Am/’Moonlight’ night golf format last year. What do you expect from the week?
It’s great to have some new formats in golf. Last year sounded fun and relaxed. It will be weird playing in the evening, and having the whole day free beforehand but the courses are always in great shape at the Emirates, so I’m really looking forward to it. Plus, I’ll get to go to the beach during the day.

You’ve not played the Faldo Course at Emirates before. How hard is it to get up to speed with a new layout quickly?
I’ve not played the course before but I’ll play at least one practice round and my caddy and I will both get a lot out of that and be ready for the competition. I should also try to practice under the floodlights I guess as that will be a new experience for me. 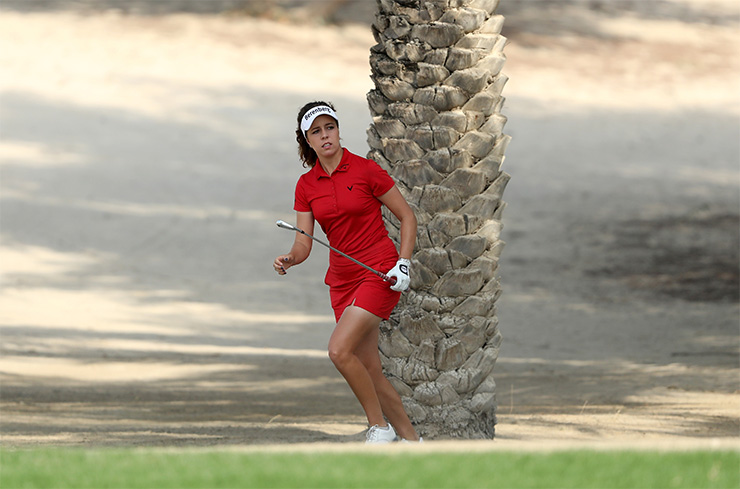 Hall is keen to atone for a “tired” showing at the then OMEGA Dubai Ladies Masters on the Majlis in 2017. Getty Images

These innovative new formats are good for the game/exposure of the LET aren’t they?
Yes absolutely, especially if they attract a new audience.

With your focus on the LPGA Tour, you’ve only made two LET tour starts in 2020, finishing T51 at the Scottish Open and T45 at the AIG Women’s Open. The win in Portland surely gives you confidence of claiming your first regular season LET title?
Well yes, I will certainly come to Dubai full of confidence and I’d love to be able to get another win in before the end of the year. I’ve not yet won a regular LET event, so that would be nice to do.

I will certainly come to Dubai full of confidence. I’ve not yet won a regular LET event, so that would be nice to do.

Talk more about your ambassadorial role with the R&A, what has been achieved thus far and next steps?
The R&A recognise that the biggest growth potential in golf is in the women’s and children’s area of the game and we’ve been working together to inspire as many children to take up the game as we can. It’s really important for the children to have role models and to show them that the game can be fun and rewarding, in every sense. The R&A have also got their Women’s Golf Charter, whereby organisations around the world commit to doing more to recruit new women into golf. So it’s exciting times and it’s having good results already.

With golf seen as a relatively safe pursuit in this new COVID-era, there are more people getting into the game. It’s clearly a real opportunity for the women’s game?
I love the fact that participation numbers have risen over the past few months in the UK, and may other countries, I believe.  So it’s important that all golf facilities, whether it’s a course or a driving range, remain as welcoming as possible. Some of them are doing some great offers to attract people in and that’s really good to see.

You’ve also signed up for the Aramco Saudi Ladies International (rescheduled for Nov. 12-15). How important is it to you to help promote/grow the game in non-traditional markets?
It’s hugely important. As I spoke about with the R&A, I think it’s important for women and children in countries where golf is relatively new to see what is possible. It’s exciting to think that we might be able to inspire people to try it and I believe it could really help them with their confidence and to develop as individuals.

The contrasting final-round fortunes of Hedwall, Henry and co.