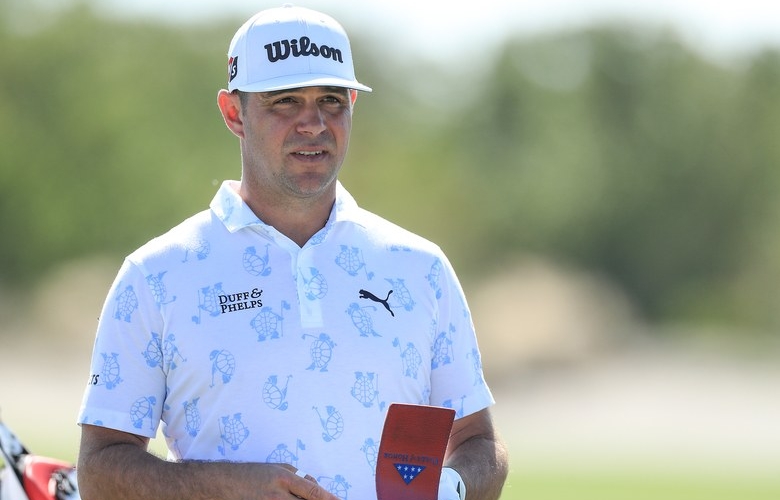 Gary Woodland waits to play his second shot on the third hole during the first round of the 2019 Hero World Challenge at Albany on December 04, 2019, in Nassau, Bahamas. (Photo by David Cannon/Getty Images)

By Brian Wacker
NEW PROVIDENCE, Bahamas — The Presidents Cup is still a week away, but with 11 of the U.S. team’s 12 players in the field at Albany for the Hero World Challenge, this week figures to be a pretty good entree to the matches at Royal Melbourne.

In Wednesday’s opening round — the tournament started a day earlier than normal to allow for the Americans to make the 10,000-mile trip Down Under — the wind even cooperated, too. Blowing 15 to 20 mph most of the day and out of the opposite direction than players are used to at Albany, it provided a little taste of the conditions players can expect to see in Australia.

Of the 18 players in the limited field, only half broke par. Two of them — Reed and Gary Woodland — share the top spot after each carded an opening six-under 66, two shots clear of Chez Reavie. It was a good sign for two of the Americans.

“The wind’s tough out there,” said Woodland, before adding that he found himself with the rare task of having to hit 5-iron into multiple par 4s. “But I drove the golf ball beautifully and controlled the ball in the wind, which is what you’ve got to do out here. And I saw some putts go in obviously to make a lot of birdies, made some putts, which is nice.

“No doubt about it [this will prepare me for next week]. I’m hitting driver almost every hole here, which we won’t be next week. The iron play is definitely what you’re going to see next week, working the golf ball with the wind, controlling the ball distance-wise, so I think that’s a nice tune-up.”

It was for Reed, too.

In 2004, Phil Mickelson famously switched equipment at the Ryder Cup. Lefty tallied just one point and the Americans were crushed.

The U.S. record in the Presidents Cup is significantly better, and Reed isn’t worried about busting out new irons on the eve of these matches.

“Normally I would say [it is risky],” he said. “But I’ve been at home grinding with these a little bit, just not this past week, so I’ve hit them before and so I was comfortable on actually putting them into play this week. Especially when I had four or five of my irons already, the grooves were kind of gone and I was already having to put a new set in, so it was kind of a perfect time to debut them and throw them in.”

Though Reed hit only 11 of 18 greens he said he felt he hit the ball better than that.

“I felt like I hit a lot of iron shots exactly how I was looking at, flighting it how I wanted to, holding it into the wind,” he said. “I feel like the irons were doing well, the swing was doing well as well.”

More good news for the U.S. team: Justin Thomas and Rickie Fowler held up well, too, each shooting 69, while Matt Kuchar carded a 71 after stumbling with two bogeys over his final five holes.

Not all of the Americans fared well, though. Six of them failed to break par, including playing captain Tiger Woods, who finished with an even-par 72 after a round that included four bogeys and a double on the last.

“Just hit a couple poor iron shots that cost me a few shots,” he said.

He could afford it, for now anyway.