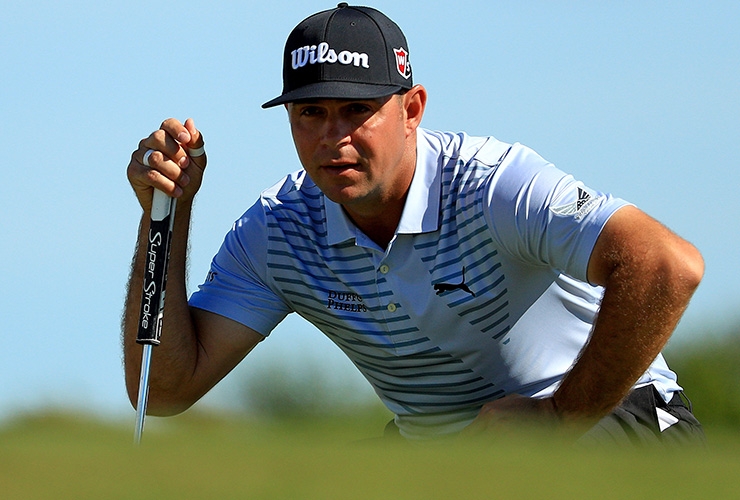 Gary Woodland of the United States lines up a putt on the third hole during the third round of the Hero World Challenge on December 06, 2019, in Nassau, Bahamas. (Photo by Mike Ehrmann/Getty Images)

By Christopher Powers
Between a charge from Tiger Woods and a rules controversy involving playing partner Patrick Reed, it’s a miracle Gary Woodland was able to stay focused on Friday at the Hero World Challenge, especially down the stretch. Despite all this, the reigning U.S. Open champion managed to birdie his final two holes to shoot a four-under 68, which gave him the solo lead at 13-under 203.

“Nice finish, same as yesterday,” said Woodland, referring to his birdie-birdie-birdie close on Thursday at Albany Resort in the Bahamas. “I played well today, little hiccup on the par 5 [15th], should have made birdie, but outside of that I played pretty solid. Looking forward to tomorrow.”

Woodland will play alongside Henrik Stenson in Saturday’s final round thanks to the Swede’s third-round 68, which put him one back at 12 under. While he’s finished inside the top 10 four times in his last 11 starts, Stenson hasn’t been overly pleased with his game. Safe to say he’s feeling much better through 54 holes.

“It’s definitely been a big step forward,” said the 2016 Open champion. “I guess most people know [ball-striking] has been a strong part of my game, but it hasn’t really been as of late. So I’m happy with the progress and the way I’ve been hitting it this week. Still not 100 percent confident in it, but I’ve hit a lot of good iron shots again and kept the ball in play most of the week.

“All in all, a good day out there and we’re right in the mix going into the last round.”

Also in the mix are Tiger Woods and Justin Thomas, who played together on Friday and tied with five-under 67s. They are each at 11-under 205 and will play together again on Saturday. Jon Rahm is also at 11 under following his third-round 69.

Patrick Reed, who led after 36 holes, shot what appeared to be an even-par 72 to remain at 12 under, but it was later changed to a 74 after he received a two-stroke penalty for improving his lie in a bunker at the par-5 11th hole. His bogey 6 was changed to a triple-bogey 8, dropping him to 10 under for the tournament.